For the second time, President Trump on Monday formally nominated Rep. John Ratcliffe to lead the Office of National Intelligence. It was the latest move in a complicated maneuver to fill the nation’s top intelligence position, which has been without a permanent director for seven months. Trump previously tapped Ratcliffe for the role last summer, before the Texas Congressman quickly withdrew from consideration after questions were raised about his qualifications (the law requires extensive intelligence experience) and dubious claims on his resume.

While many observers questioned the wisdom of renominating Ratcliffe, others saw the move as ensuring—either by design or by default—that U.S. Ambassador to Germany Richard Grenell would continue to serve as the acting director of national intelligence. Trump tapped Grenell to serve in the position in an acting capacity last month, replacing Joseph Maguire, the former acting DNI who assumed the role after Ratcliffe’s nomination was withdrawn last summer.

The formal nomination of Ratcliffe allows Grenell to serve in an acting capacity for 210 days while Ratcliffe’s nomination is pending before the Senate and, if the nomination is rejected or withdrawn, for another 210 days.The move, and Trump’s excessive reliance on officials serving in acting roles who have not received Senate approval, has experts calling for reform of the 1998 Federal Vacancies Reform Act, which governs how top executive branch positions are filled.

“Abuse of federal vacancies is not unique to the Trump administration. However, this kind of gamesmanship feels unprecedented, as does the president's blatant admission that he prefers acting officers to confirmed ones,” said Project On Government Oversight Senior Investigator Nick Schwellenbach. Persistent reliance on them is “an unconstitutional disregard of the Senate's obligation to evaluate and vote on the president's nominees,” he said, which could “risk taxpayer dollars with potentially ineffective leadership [and] risk our national security with extended unqualified leadership.”

Schwellenbach argued that Congress should shorten the length of time acting officials can serve to disincentivize presidents from circumventing the formal confirmation process. Additionally, Congress should consider requiring that acting directors, like permanent directors of national intelligence, have national security experience, he said.

Similarly, Steve Vladeck, a University of Texas law professor who specializes in federal jurisdiction and national security, said continuous use of temporary leaders is a “dangerous precedent” and “suggests a fairly urgent need for Congress to reform the   [Vacancies Act].”

“Given the opposition to Ratcliffe the first time around, it’s hard not to be cynical about this nomination—as being more about extending the clock for Grenell to serve as acting DNI than as being about confirming Ratcliffe,” said Vladeck.

Anne Joseph O’Connell, a law professor at Stanford University who specializes in administrative law and the federal bureaucracy, noted that even if Trump tapped Ratcliffe just to extend Grenell’s tenure, “the nomination is necessary to carry out the function of the position.” The director has an “exclusive assignment of tasks” that only he or she or a principal deputy can carry out, but the No. 2 position in the Office of the Director of National Intelligence has been vacant since August, she noted. Therefore, if the time limits under the Vacancies Act run out, the functions of the director or acting director could not be delegated to another official as is the case with other executive roles.

In a recent report, O’Connell recommended Congress require that senior agency officials (one of the three types of officials eligible to be acting leaders) serve in the agency for a minimum of five years to be eligible to serve as an acting head, instead of the current 90-day minimum (Grenell, as a Senate-confirmed official in his capacity as U.S. ambassador to Germany, is eligible to serve as acting DNI even though he has no previous experience at ODNI. O’Connell also recommended Congress shorten the total amount of time an acting official can serve to balance the typical delays of the confirmation process (such the vetting process and political fights in the Senate) and “incentivize the White House to use the appointments process.”

Presidents since Reagan have relied on acting cabinet officials (especially in their first and fifth years), but unlike his predecessors, Trump has had more acting secretaries than confirmed ones, as O’Connell found: 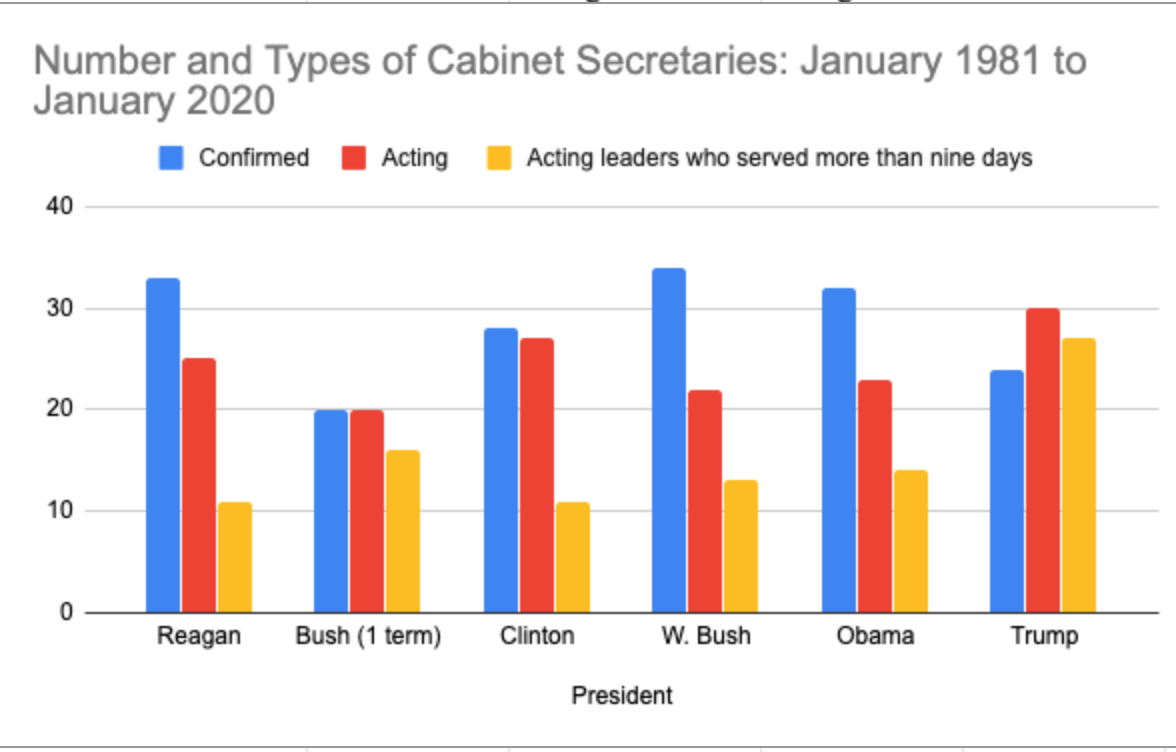 In his first three years, Trump has had four intelligence directors, three of which have been acting. In comparison, President George W. Bush had two permanent in the first four years the position existed and President Obama had two permanent and one acting during his two terms.

Trump’s first intelligence director, Mike Dempsey, served on an acting basis from January 2017 to March 2017, before Dan Coats was confirmed. When Coats departed in late July 2019, Trump tapped Ratcliffe for the position. However, questions about Ratcliffe’s qualifications and resume as well as lukewarm support from Republicans led to Ratcliffe withdrawing his nomination on August 2.

Six days later, Sue Gordon, the No. 2 intelligence official, whom Coats reportedly recommended replace him, resigned after being told the White House would not nominate her for the director position. The same day the president named Maguire, then director of the National Counterterrorism Center, to be the acting director. Maguire was immediately thrust into the spotlight during the impeachment inquiry and broadly criticized for his handling of the whistleblower complaint that sparked the investigation.

President Trump announced on Feb. 19 that Richard Grenell, U.S. ambassador to Germany, would replace Maguire as the new acting director. Although the administration justified the move as necessary to comply with the Vacancies Act as the 210-day mark from Coats departure approached, The Washington Post reported that Trump was angered by an intelligence briefing for members of Congress about threats of Russian interference in U.S. elections, thus ending Maguire’s chances of being nominated as the permanent director.

Grenell’s appointment “is raising concerns even among Trump allies who have been quick to point out that Grenell's primary qualification appears to be his loyalty to the president,” CNN reported. Following the president’s acquittal in the impeachment trial last month, the administration has sought to purge the government of alleged disloyal employees.