Workforce
Half of Security Clearance Holders Are Under Continuous Evaluation

If you have an active security clearance and you’re not currently enrolled in CE, you likely soon will be.

The Defense Counterintelligence and Security Agency continues to make progress on security clearance processing times and enrolling new applicants into its continuous evaluation program. In numbers released for the National Industrial Security Program Policy Advisory Committee, DCSA shows 2.2 million total security clearance holders enrolled in CE—that’s nearly half of the total security cleared population, and over two-thirds of the Defense Department’s clearance population, based on the most recently released figures. (The Office of the Director of National Intelligence has not made a version of its annual report on security clearance determinations releasable since FY 2017.)

As of 2017, the number of individuals with security clearance eligibility was just over 4 million, with 3.4 million of those individuals being Defense clearance holders. With today’s CE enrollment figures at 2.2 million, that means the CE rollout is well underway. If you have an active security clearance and you’re not currently enrolled in CE, you likely soon will be.

The ramped-up rollout of CE comes after Executive Correspondence from the Office of the Director of National Intelligence in February paved the way for continuous vetting to become the norm, replacing traditional periodic reinvestigations.

“To me, the most important element of Trusted Workforce 2.0 is this—transitioning away from a traditional periodic reinvestigation to what we call continuous vetting, those individuals currently enrolled in continuous evaluation,” said Mark Frownfelter deputy assistant director National Counterintelligence and Security Center, Special Security Directorate, in a March interview following the release of the Executive Correspondence.

Of those now enrolled in continuous evaluation, 69% are Secret clearance holders, and 31% are Top Secret or TS/SCI (Top Secret with access to Sensitive Compartmented Information) security clearance holders. Within the Defense population, 21% of those enrolled in CE are industry, 34% are Army, 20% are Air Force, 15% are Navy and 8% are Marines. Two percent are Defense Fourth Estate members, which includes members of the Joint Staff, Office of the Secretary of Defense, and those organizational entities that aren’t in the military departments or combatant commands.

DCSA continues to highlight the effectiveness of finding potential issues before a traditional periodic reinvestigation would have identified them. CE alerts flag issues, on average, at seven years and one month for Secret clearance holders and two years and seven months for Top Secret clearance holders—both well earlier than the traditional 5- and 10-year reinvestigation timelines. Among the issues flagged are criminal conduct, financial considerations, alcohol consumption, and drug involvement. It’s worth noting that just because an issue is flagged under CE it  doesn’t necessarily trigger a security clearance denial. CE alerts trigger a review, which may or may not trigger an investigation, which then may or may not result in a notice of security clearance denial.

The rapid advancement of CE over the past year has been possible based on improvements in the National Background Investigation Services, the updated IT framework designed to advance and improve the technology behind the background investigation program. While 2019 saw relatively few applicants enrolled in CE, 2020 has ushered in a significant wave of new enrollees.

Thus far, 87,803 security clearance periodic reinvestigations have been deferred into the CE program—that’s 87,803 PRs that didn’t need to begin, thus opening up investigative time and resources to allow DCSA to eliminate the clearance backlog and improve timeliness. Secret clearance processing times for DoD/Industry are at 101 days for the fastest 90% of applicants, and Top Secret clearance processing times are 280 days, according to figures released by DCSA at Wednesday’s NISPPAC meeting. Both are well under half of what they were last year.

The improvements in security clearance processing times come even as some applicants had expressed concerns about delays that may be caused by the coronavirus pandemic. But DCSA, including background investigators and adjudicators working at the Department of Defense Consolidated Adjudications Facility, are a success story in navigating remote work within a federal agency. The vast majority of background investigators already worked remotely from the field, and adjudicators also had a program for remote work in place before COVID-19 hit. 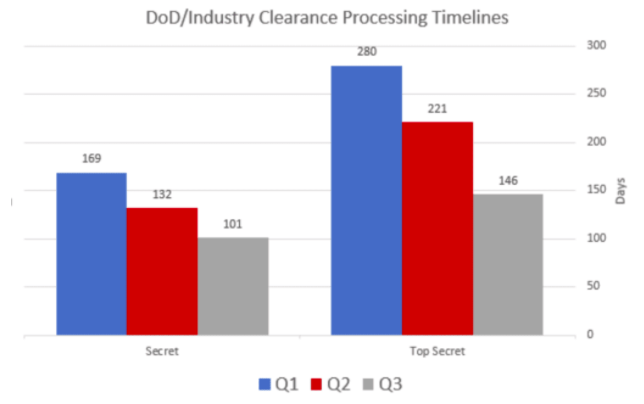 With the workforce ready to work remotely, and the defense industry still actively onboarding new applicants and awarding new contracts, the security clearance investigation process has marched on.

NEXT STORY: Coronavirus Roundup: 'It's Complicated' Between Fauci and Trump; Contracting Community Asks for Extended Relief