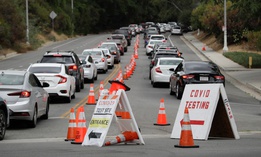 The House on Wednesday voted to end the U.S. Postal Service’s mandatory payments toward the health benefits for future retirees, advancing a measure that would eliminate a controversial requirement the cash-strapped mailing agency has defaulted on for years.

Congress first established the prefunding mandate in the 2006 Postal Accountability and Enhancement Act, the last major legislative overhaul of the Postal Service, and the requirement has hampered the agency ever since. Shortly after the law’s passage, the recession hit and mail volume began to decline precipitously. That trend has continued to this day, leaving USPS without the financial means to make the annual payments and forcing it to default on them while absorbing the losses on its balance sheet.

The Postal Service has lost money for 13 consecutive years and a majority of those losses stemmed from the prefunding requirement. In fiscal 2019, for example, 83% of the $8.8 billion the agency lost came from payments into its retiree pension fund and retiree health benefits fund. Critics of the mandate include a range of Republicans, Democrats, mailers and labor unions. They have estimated the law requires USPS to fund the benefits for retirees up to 75 years in the future, an obligation virtually no other government entities face.

Despite repeated bipartisan efforts, Congress has for years failed to repeal the mandate and reamortize the balance of USPS’ liabilities over a 40-year period as part of a larger postal overhaul effort. Wednesday’s vote marked the first time lawmakers pulled that provision into a standalone measure, as stakeholders have preferred to keep it as a bargaining chip to bring diverse views together for larger, compromise postal reform legislation.

"It gives them no flexibility, it gives them no additional cash flow," said Rep. Mark Meadows, R-N.C., who has helped push previous bipartisan postal reform efforts, on the House floor Wednesday. "I cannot support his bill because it does not do what we need to do, which is address the problem today. This just kicks the can down the road."

Other lawmakers suggested Congress should not allow the perfect to be the enemy of the good. Rep. Earl Blumenauer, D-Ore., went a step further in making his case against prefunding.

"This is part of the effort by some who literally have a jihad against the Postal Service," the congressman said.

The USPS Fairness Act (H.R. 2382) had more than 300 cosponsors, including more than five-dozen Republicans. Sen. Steve Daines, R-Mont., has introduced a companion bill (S. 2965) in the Senate with Sen. Brian Schatz, D-Hawaii. The measure would eliminate the requirement going forward and forgive all payments on which USPS has defaulted.

Postal management has long called for the reform as one of the key tenets of any legislative effort to put the agency on better financial footing. Dave Partenheimer, a USPS spokesman, praised the legislation's intentions on Wednesday, while making clear it was only a first step for the changes the agency requires.

“This elimination of a requirement faced by no other public or private entity would improve our balance sheet and reduce our future reported losses,” Partenheimer said. “The Postal Service believes H.R. 2382 would be an important part of the legislative and regulatory changes—along with substantial self-help efforts by the Postal Service—that are necessary to secure our long-term financial stability.”

He added, however, it would not address the liquidity crisis that “will literally threaten our ability to deliver mail” in the next few years. The Postal Service pledged to work with Congress to craft a plan to make additional legislative changes. In addition to the prefunding repeal, lawmakers have looked to tweak the Postal Service’s delivery standards, enable larger price increases and establish new streams of revenue to reverse the mailing agency's slide.