The U.S. Customs and Border Protection agency has opened an investigation into vulgar and misogynistic social media posts made by members of a secret Facebook group for current and former Border Patrol agents.

On Monday, “U.S. Customs and Border Protection was made aware of disturbing social media activity hosted on a private Facebook group that may include a number of CBP employees,” said Matthew Klein, head of the agency’s internal affairs unit.

Klein said CBP “immediately informed” the investigators with the Homeland Security Department’s Office of Inspector General and initiated an inquiry. The office typically takes the first look at allegations of serious misconduct within the CBP.

The investigation comes after a ProPublica report exposing the secret three-year-old Facebook group, which is called “I’m 10-15” and has some 9,500 members. Group members posted offensive graphics, including a photo illustration of Democratic Rep. Alexandria Ocasio-Cortez being sexually assaulted by President Donald Trump; discussed plans to disrupt a congressional visit to a Border Patrol facility; and joked about the deaths of migrants.

Recent posts shared with ProPublica include a meme using graphic language to mock CNN anchor Anderson Cooper’s sexual orientation and a comment that referred to soccer star Megan Rapinoe as a man. A separate thread made fun of a video of a migrant man trying to carry a child through a rushing river in a plastic bag.

One poster wrote, “At least it’s already in a trash bag.”

Another wrote, “Sous-vide? Lol,” referring to a method of cooking in a bag. 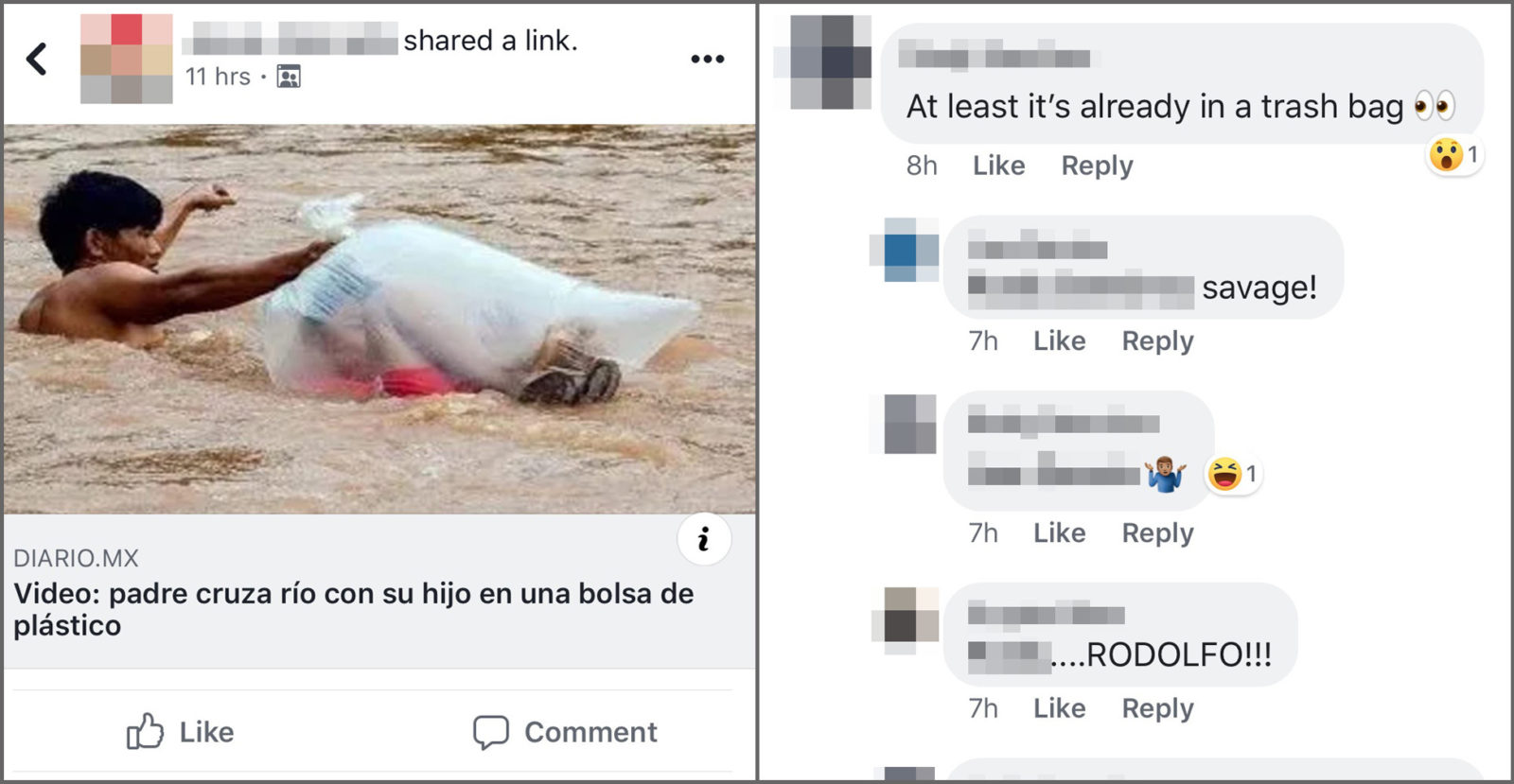 “These posts are completely inappropriate and contrary to the honor and integrity I see — and expect — from our agents day in and day out,” she said in a statement. “Any employees found to have violated our standards of conduct will be held accountable.”

The disclosure of the group’s existence and the nature of the posts raise a number of questions that remain unanswered. It’s apparent from some of the comments that agents were aware that the posts were inappropriate, and potentially actionable, for serving government employees. But it’s unclear whether CPB’s senior leadership was aware of the group or if any complaints had been made to the agency.

On Capitol Hill, the leader of a key oversight committee expressed outrage.

“This Facebook group is beyond sexist and racist — it is truly abhorrent and shameful, and there is no excuse for this depraved behavior,” said Bennie Thompson, a Mississippi Democrat who chairs the House Homeland Security Committee, one of the committees with jurisdiction over CBP. “The agents found to be responsible for these vile comments should no longer have the privilege of representing the United States of America in uniform.”

The story generated widespread revulsion on social media, with more than a dozen members of Congress expressing horror and disgust at the posts. Some called for an investigation into the group.

One of the targets of the offensive posts, Ocasio-Cortez, responded several times on Twitter.

This just broke: a secret Facebook group of 9,500 CBP officers discussed making a GoFundMe for officers to harm myself & Rep. Escobar during our visit to CBP facilities & mocked migrant deaths.

This isn’t about “a few bad eggs.” This is a violent culture. https://t.co/SkFwThHElx

The union representing Border Patrol employees, the National Border Patrol Council, issued a statement saying that the Facebook group is “not representative of our employees and does a great disservice to all Border Patrol agents, the overwhelming majority of whom perform their duties admirably.”

ProPublica’s reporting, the union said, “cited a handful of people who posted inappropriate content out of 9,500 members of the Facebook group, not all of whom are active duty agents.”

But CBP insiders told ProPublica that the Facebook group has played host to offensive memes and degrading humor since it was launched in 2016.

“The problems with the 10-15 page have been going on for years,” said one current Border Patrol agent who asked to remain anonymous for fear of retribution. “No one has done anything about it.”

The agent said that during the 2016 election, group members wrote up homophobic posts attacking an openly gay agent who voiced support for Hillary Clinton. “Nobody seemed to care,” recalled the agent.

Former Border Patrol agent Jenn Budd, who is now an immigrant-rights activist, told ProPublica that language like “floaters” — used to refer to the bodies of drowned migrants in a post about the widely shared Associated Press photograph of a father and daughter who died crossing the Rio Grande last week — is “normal, everyday terminology.”

“That’s as normal as saying ‘10-15,’” Budd said, referring to the code for a migrant in custody that the Facebook group uses as its name. Budd said that degrading comments about women were also endemic to Border Patrol, whose workforce as of 2017 was only 5% female.

Budd said she had little faith that CBP really intends to investigate its own.

“When they sit there and say, ‘We’re not going to tolerate this,’” Budd said, “they are, I’m just going to say it, lying.”

Revelations about the group came the day after Facebook released an audit of its efforts to protect civil rights across the social media platform. The audit specifically recommended strengthening protections against hate speech and calls for harassment related to national origin.

Heidi Beirich, the director of the Intelligence Project at the Southern Poverty Law Center, said she’d been pressing Facebook to pursue secret groups like 10-15 and hidden hate speech for years. Facebook, she said, “can use their AI or their people to identify these groups, and with the horrible language in there, they should have been finding these people.”

Facebook has not yet responded to questions from ProPublica.

Some members of the Facebook group predicted there would be trouble if the posts ever became public. “A bunch of people gonna regret comments they write on 10-15 if it shows up in court,” wrote one member in a post obtained by ProPublica.

“You understand this page is full of Agents, right?” replied another member, apparently suggesting that no one would expose the offensive comments of their fellow Border Patrol employees. 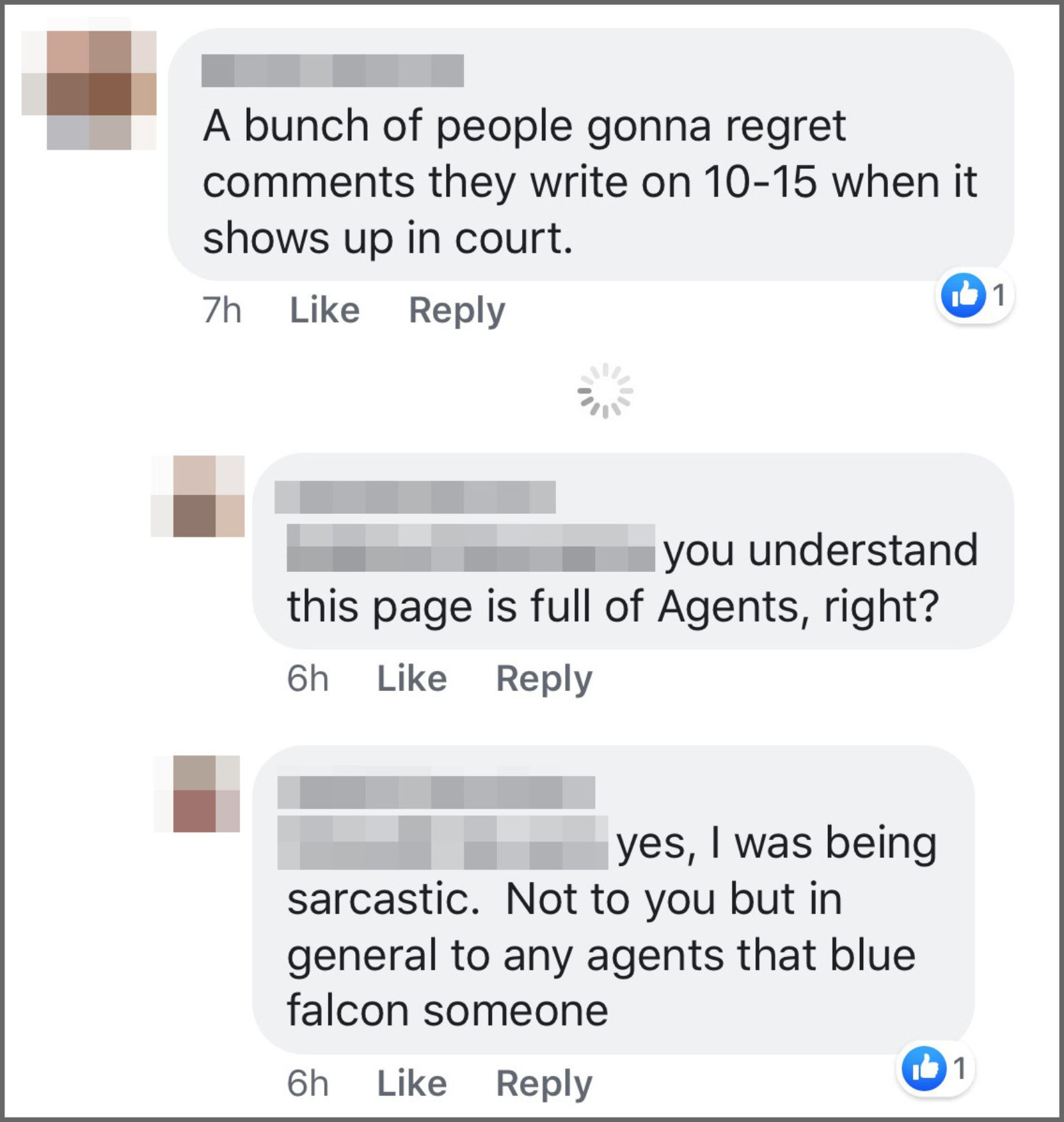 If you have any information about the Border Patrol you’d like to share, please email us at borderpatrol@propublica.org. For more secure ways to send us information, please see instructions.

This article was originally published in ProPublica. It has been republished under the Creative Commons license.  ProPublica is a Pulitzer Prize-winning investigative newsroom. Sign up for their newsletter.