Management
We Know Almost Nothing About the Costs of Grant Administration

By Jeff Myers and Kathryn Newcomer

Surprisingly, we don’t have any similar rule of thumb for grants management, despite the fact that the federal government spends over $730 billion on grants, a significant part of the federal budget. In fact, we haven’t really had any idea what proportion of their budgets grantors and grantees typically dedicate to administrative costs until now.

A new series of questions in the Annual Grants Management Survey* conducted by our organizations has just captured these data. So now we can say: Local governments spend about 7% of their grants on administration. Federal and state grant agencies spend just over 10%. And non-profit respondents to our survey report spending about 9%. All of that is not very surprising—kind of comforting perhaps. Until we dig deeper, and realize that 36 entities spend more than 20% of their grant value on grant administration, while 107 respondents reported spending less than 5% of their grants on administration.

How do grantors compare to grantees in administrative spending?

A breakdown of the data shows, perhaps surprisingly, that grantors spend more than recipients—an average of 10.3% of the grant is spent by grantors, versus 9.3% spent by recipients. 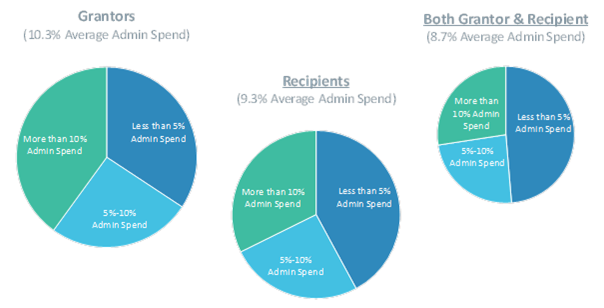 And just 8.7% of grants are spent on administration by “pass through” entities such as state governments, which both make and receive grants. Finally, as the graphic above shows, a substantial portion of all grant managers spend over 10% of their grants on administration, with the largest proportion of grantors falling into this group.

What about efficiencies of scale?

What are drivers of administrative expenses?

One driver may be the fact that survey respondents expressed dissatisfaction with the information technology systems their agencies use to manage grants. And in fact, each agency typically spends time and money to choose, acquire, install, and implement an IT system. Some grantees indicate that they would prefer that grantors provide grant recipients with an IT system (capturing efficiencies by sharing one process to choose, acquire and even install an IT system) which might serve 10 or even 1,000 grant recipients from a single grantor agency. Each bar in the chart below shows the percentage of the number of grant managers (n) submitting each response option.

Grantees report that the automation they rely upon has not improved much. Almost one third of the respondents (32%) report that they have no database for reporting from grantees, and 38% still rely on email reporting along with data entry. On a 1-to-5 scale where 5 is high, 34% of grantees reported low satisfaction (a 1 or 2) with their access to technology. This fairly low level of satisfaction has not improved from our survey findings the year before. Even among those who are satisfied with their access to technology, many grantees are still not satisfied with their organization’s ability to use that technology. In fact, just 30% of all survey respondents indicate satisfaction that their organizations have both access to technology, and are able to use it (i.e. have staff who know how and have time to use it), while about another 30% were dissatisfied (the remainder described themselves as “moderately satisfied”).

What about grantees’ performance?

Given the reported insufficient access to technology and the skills to use it well to support grant making, what difference does this make? About half of responding grantors say that they can’t measure performance of their grant program (47% of federal respondents, and 56% of state and local government respondents). This lack of focus on performance is noteworthy.

Relatedly, when asked which are the most significant factors in achieving success, the number one factor noted in both 2018 and 2019 remains “well qualified grant management staff.” And the second most important factor is “effective training/technical assistance for grantees.”

Fortunately, the federal government has been devoting time and thought to such data standards. Likewise, we believe a unified portal presents an important opportunity for grant recipient burden reduction, but it cannot happen without coordination across agencies at the federal level.

*A note about methodology: The survey, conducted in October 2019, relied on voluntary, self-reported responses from federal, state, and local government grant managers, as well as those in non-profit and some private sector roles. A link to the survey was sent out by multiple organizations, so it is impossible to know how many people received the link. Thus, those invited to respond did not constitute a statistically representative sample of grant managers. There were 309 respondents. This self-reporting method has two key weaknesses regarding estimation of administrative costs: (a) We did not provide a clear and complete standard chart of accounts that would have helped ensure that every respondent defined administrative expenditures to include the same items; and (b) We did not validate responses using data from accounting records or from an independent audit, nor do we believe that most respondents relied upon those credible and valid sources. We suspected that such data validation requirements would have dramatically reduced the number of persons willing to take the time needed to respond to this survey.

Jeff Myers is a Senior Director at REI Systems, which develops grant management IT solutions for government agencies. Dr. Kathryn Newcomer is a Professor of Public and Nonprofit Program Evaluation, and Research Design at George Washington University. She recently completed service as the Director of the University’s Trachtenberg School of Public Policy and Public Administration.

NEXT STORY: Beyond Sanitizing and Social Distancing – a Healthy Circadian Rhythm May Keep You Sane and Increase Resilience to Fight COVID-19