Staff would grow by a net 1,700 positions from 2020 levels, if $400 million in “cap adjustments” to exceed spending levels in the 2019 budget agreement is included.

President Trump's fiscal 2021 budget seeks to restore funding to its 2010 levels for the Internal Revenue Service, which has been struggling with staffing and resources over the past decade.

On Monday, the White House sent Congress a $4.8 trillion budget request for fiscal 2021 that would increase military spending by 0.3% and decrease non-defense spending by 5%. For the Internal Revenue Service, the plan proposes $12 billion, which is about a 4% increase from fiscal 2020, yet would decrease staff levels by 1,183 full-time employees. However, with $400 million in “cap adjustments,” there would be a net increase of 1,700 positions from fiscal 2020 levels. “Cap adjustments” are spending that is allowed above the limits in the 2019 budget agreement because of its potential to generate revenue.

In the budget, the administration said it hopes to increase oversight of tax return preparers, strengthen enforcement and improve audits, as well as modernize the tax collection process. The base appropriations along with the cap adjustment will “generate $79 billion in additional revenue over 10 years and cost approximately $15 billion resulting in an estimated net savings of $64 billion,” according to the budget documents. “Once the new enforcement staff are trained and become fully operational these initiatives are expected to generate roughly $5 in additional revenue for every $1 in IRS expenses.” This aligns with its overall budget theme of saving taxpayer dollars and creating a more efficient government.

The National Taxpayer Advocate, an independent organization within the IRS that helps people resolve tax problems, stated in its 2019 annual report to Congress that since fiscal 2010, the agency's budget had decreased by about 20% and there were about 20% fewer employees. Meanwhile the number of tax returns the agency received increased by 9%.  ProPublica reported that the average revenue collection decreased from $23 billion between fiscal 2008 and 2010 to $14 billion between fiscal 2015 and 2017. 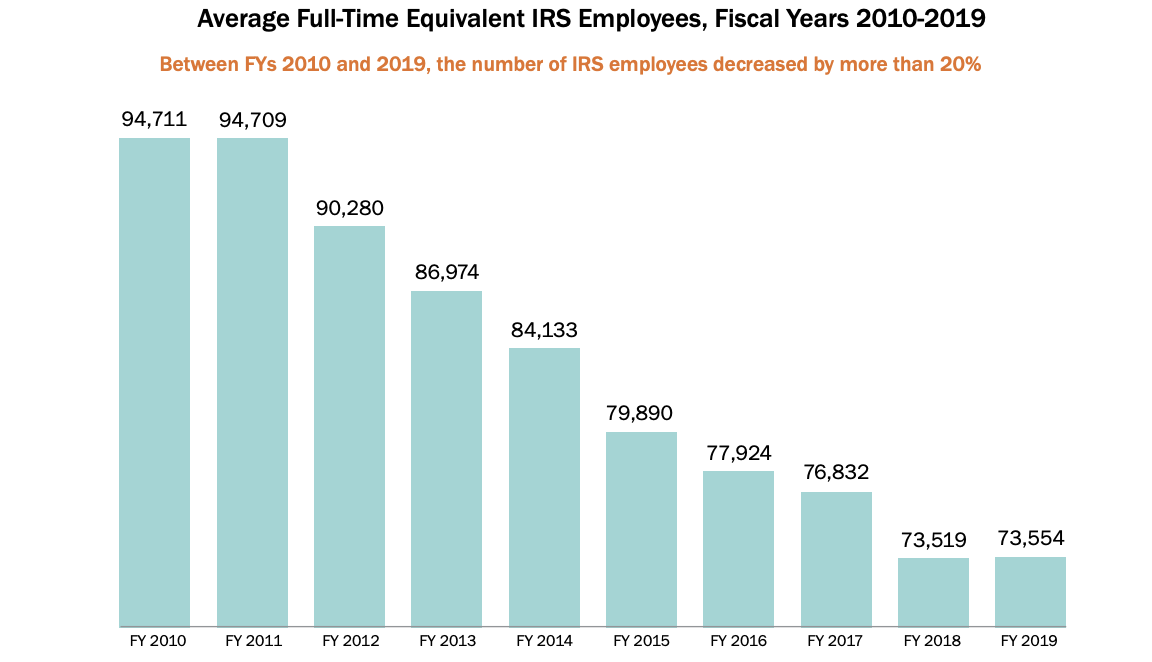 Center on Budget and Policy Priorities Director Chuck Marr told Government Executive he was pleased with the budget because of how it seeks to restore funding and staffing levels. “The president’s budget shows an important bipartisan recognition that IRS enforcement funding is too low, and that the revenue gains from added enforcement funding would more than offset the cost,” Marr said. “Lawmakers should restore adequate funding for the core government function of collecting taxes owed under law.”

He it would be “unfair” to look at the budget proposal without considering the additional $400 million in cap adjustments because this is money set aside that “actually raises money” through enforcement. Marr applauded the administration's recognition that the “IRS’ enforcement function needs to be rebuilt” after the budget being “severely depleted” since 2010.

Jeff Trinca, vice president of Van Scoyoc Associates and a former tax aide in Congress, echoed Marr’s assessment in Bloomberg News. The Trump administration “[has] demonstrated year in and year out that they understand that if the agency actually, if it has more funding, it brings in more revenue,” he said.

Meanwhile, others expressed skepticism about examining the budget with the cap adjustments and thus counting on future staff increases at the agency.

The National Treasury Employees Union, which represents about 70,000 IRS workers nationwide, said the proposed budget is “once again distressing for federal employees” and issued its press release showing staff numbers without the cap adjustments. NTEU President Tony Reardon told Government Executive, “NTEU is a strong supporter of more funding and staffing for the IRS, but the cap adjustment is rarely granted by Congress.”

Without cap adjustments the budget “envisions 1,183 fewer full-time employees, which directly contradicts calls by multiple government watchdogs to increase IRS staff and resources to improve customer service and enforcement of the tax code,” NTEU said. Ahead of the tax filing season starting on Jan. 27, the union raised concerns that the agency’s decreased funding, staffing and resources will affect its ability this year to conduct audits, give in-person tax assistance and collect taxes.

When looking at just the base funds without the cap adjustment, the proposal seeks to add positions for enforcing tax collection, modernizing the agency and implementing Trump’s 2017 tax reform; however, it says the IRS would only fill critical vacancies and decrease the number of support positions in order to save for pay increases and other personnel costs.

Jim Buttonow, managing principal of JL Buttonow PLLC and a tax expert, said it’s a good thing the administration is prioritizing tax enforcement and modernizing tax collection, but when asked if cap adjustments should be considered when examining the budget he inquired further: “What does this do for future funding for hired positions? Does this one year adjustment just return the IRS enforcement staff to last year’s level given that thousands can retire?”

He said we will have to wait and see because “I think there are more questions than answers about funding outside the normal budget process.”

NEXT STORY: Interference in Roger Stone Case Could Have Widespread Impact on Justice Department Workforce