The Sierra Blanca facility, which houses ICE detainees, shuts down its water supply at 11 p.m. daily to allow its on-site water tanks to replenish overnight.

By Julián Aguilar
The Texas Tribune

EL PASO — A West Texas detention center is operating under a water shortage that has forced the facility to use port-a-potties and shut down its water supply every night to replenish supply tanks.

A U.S. Immigration and Customs Enforcement spokesperson told The Texas Tribune that the West Texas Detention Facility in Sierra Blanca, which houses ICE detainees, has been under “water conservation protocols” since Oct. 21. The facility’s daily, medical and kitchen operations aren’t affected, and bottled water has been made available, the spokesperson said. Showers are available from 7 to 11 pm, and the facility’s laundry has being outsourced to Fabens, Texas, about 60 miles away.

“WTDF daily operations have not been affected. However, the facility shuts down its water supply at 11 p.m. daily to allow its on-site water tanks to replenish overnight,” the spokesperson said.

The facility, operated by LaSalle Corrections, has a capacity of 1,053 people, according to its website. A facility supervisor would not comment on the current number of detainees and referred all other questions to LaSalle’s headquarters. In 2018, the average daily population of inmates under supervision was 889 males and 245 females.

The water shortage comes at the same time the cities of Sierra Blanca and Van Horn are in a water supply dispute. 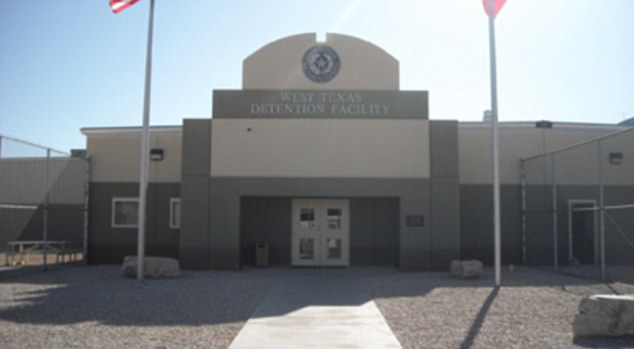 Macario Marquez, the general manager of Hudspeth County Water Control and Improvement District No. 1, said Sierra Blanca’s water has been supplied for decades by the city of Van Horn, about 30 miles east.

“I’ve been here since ’89, about 30 years, and we’ve really never had any major issues with the city of Van Horn,” he said last week. “We used to work pretty much hand in hand and cooperate with each other.”

He described the supply agreement as an informal arrangement but said there’s been a change in administration in Van Horn and that’s no longer the status quo. He said that the shortage started two weeks ago and that parts of the city are completely out of water.

Steve Mitchell, the city of Van Horn attorney, said there is an “alleged” contract but there are disputes about its validity.

“I don’t know that it’s really an effective contract,” he said.

He referred other questions to El Paso-based attorney Henry Paoli, who declined to offer specifics about the conflict.

“All I know is that there is a dispute between the two parties, and that’s going to be addressed at some point,” Paoli said.

ICE didn’t address the dispute in its statement and only said the shortage is caused by a “depletion of area” water tanks. Hudspeth County Sheriff Arvin West and Mike Sheppard, the warden of the West Texas Detention Facility, are in the process of inspecting the water lines for from Van Horn to Sierra Blanca to search for leaks.

"West Texas detention facility enacting water conservation measures after depletion of local water tanks" was first published by The Texas Tribune, a nonprofit, nonpartisan media organization that informs Texans — and engages with them — about public policy, politics, government and statewide issues.
Share This:

NEXT STORY: How Agency Leaders Can Turn Vision Into Action