Many more feds say COVID-19 is having little impact on operations than at pandemic outset.

A majority of federal employees currently working from home due to the novel coronavirus pandemic do not expect to return to the office any time soon, according to a new survey, with 60% saying they expect to remain in their current posture for at least another six months.

About three-quarters of federal workers remain in telework status, the survey conducted by the Government Business Council, the research arm of Government Executive, found, with 63% teleworking full time. Of those working remotely, nearly one-in-five expect to remain out of their offices for at least another year. Just 10% expect to return in the next two months. 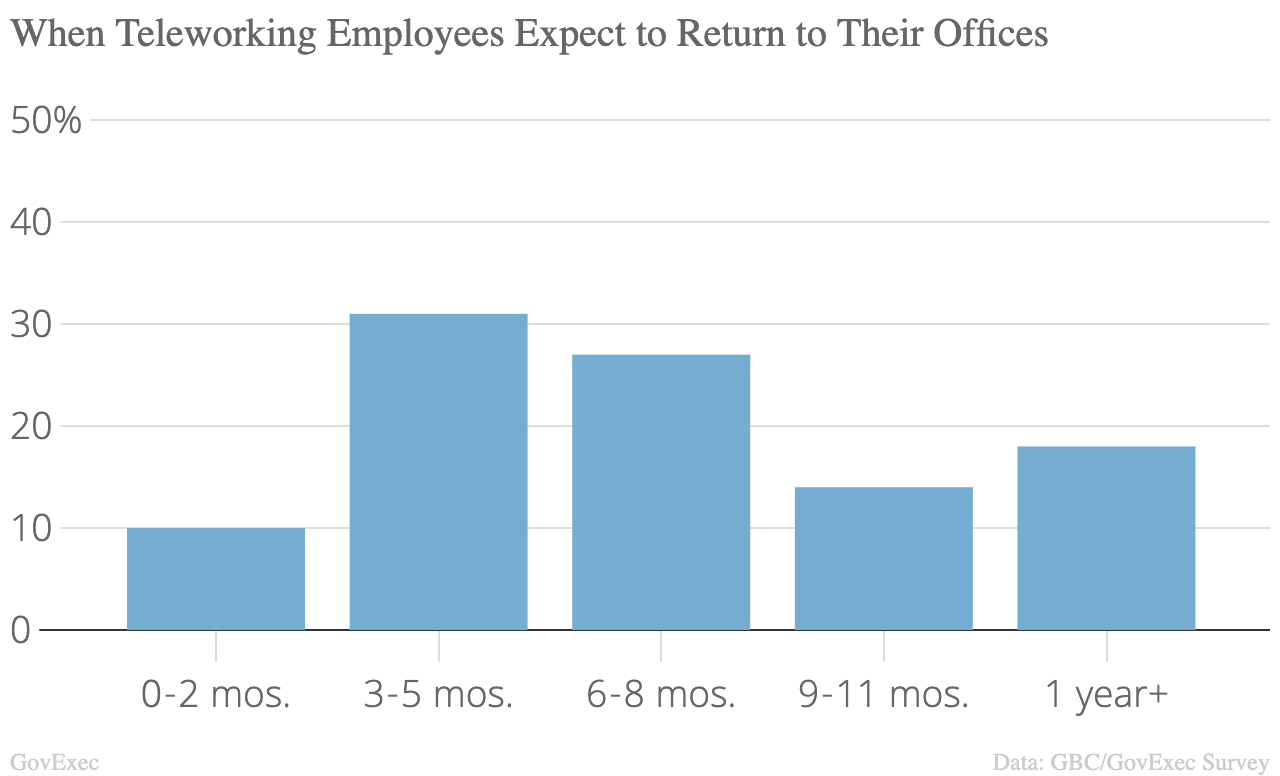 Federal workers overwhelmingly believe factors other than public health will drive agencies’ decision making regarding bringing employees back to their offices. Four-in-10 believe political influence will affect the timetable, the survey found, with the same proportion saying operational needs of their agencies will have an impact. Just 14% said problems with productivity will influence the schedule for ending remote work.

Despite their concerns, federal workers are by a 50%-28% margin confident in their agencies’ decision making regarding a return to the office. A similar proportion say their agencies have provided sufficient materials to safely go back.

Employees have grown more comfortable working from home, with far fewer saying their agencies are experiencing major disruptions as a result of the pandemic compared to earlier this year. A slight majority of respondents—53%—said COVID-19 is having a minimal or no impact on operations, compared to just 15% who said the same in a GBC/GovExec poll in April.

Initial concerns that the Trump administration would rush federal employees back to their offices to prove the country was getting back to normal have proven largely unfounded. Lawmakers have accused the administration of unsafely requiring employees to end telework, though a majority of those who were sent to work from home at the beginning of the pandemic still remain there.

Still, several agencies across government have begun slowly bringing employees back to their offices, and the Defense Department has allowed up to 80% of employees who report to the Pentagon to return. At least 16 different inspectors general have launched investigations into their agencies' return-to-the-office plans. The Government Accountability Office has faulted the Trump administration for failing to deliver a comprehensive plan for reopening offices, while the General Services Administration IG cited the agency for failing to notify its agency-tenants when employees in government-owned buildings test positive for COVID-19.

The survey was sent to a random sample of Government Executive Media Group subscribers from Sept. 9 through Sept. 16. It received responses from 1,028 federal employees and has a margin of error of plus or minus 3%.

NEXT STORY: Coronavirus Roundup: Air Force Will Keep Telework Options After the Pandemic; A Bipartisan Call for Mental Health Guidance for Students