One employee resigns while another challenges an agency chief.

Two federal employees this week engaged in high-profile acts of protest against the Trump administration’s handling of climate change, choosing to shine a light on an issue that has driven a wedge between the president and the scientific community over the last few years.

At the State Department, a senior analyst in the Bureau of Intelligence and Research has submitted his resignation, according to multiple media reports, after the administration placed certain restraints on testimony he was set to deliver to Congress. At the Environmental Protection Agency, a scientist chose to confront the administrator directly to air her grievances about climate policy and an ongoing labor dispute.

Rod Schoonover, the State analyst, testified to the House Permanent Select Committee on Intelligence last month about the impact of climate change on national security. White House officials prohibited Schoonover from submitting written testimony with scientific evidence pointing to the dangers of climate change, according to multiple reports and Democratic lawmakers. Rep. Adam Schiff, D-Calif., who chairs the intelligence panel, previously raised concerns about the administration’s interference in Schoonover’s testimony through a letter to the head of the analyst’s bureau at State.

The committee has “deep concern that officials within the Executive Office of the President sought to suppress for political reasons Dr. Schoonover’s and State INR’s objective analysis about this urgent national security issue,” Schiff wrote. He added in a statement that intelligence officials must “tell truth to power, irrespective of prevailing political winds” and called for an investigation into the administration’s alleged interference.

The EPA, meanwhile, hosted a National Honor Awards ceremony at its Washington, D.C., headquarters on Tuesday, after Administrator Andrew Wheeler pushed to bring back the recognition event for the first time in more than a decade. Loreen Targos, a physical scientist based in Chicago, attended the event as a silver medalist with the Zephyr Lakes Remediation Team. She and her colleagues received the award for “exemplary problem solving” and working “under extreme pressure and a tight timeline.”

When Targos took the stage, she unveiled a large poster calling for a “fair contract” to enable employees to “address public health and climate change.” In a video posted of the incident, she can be heard shouting at Wheeler, who stood next to her on stage, about both the contract and climate issues. 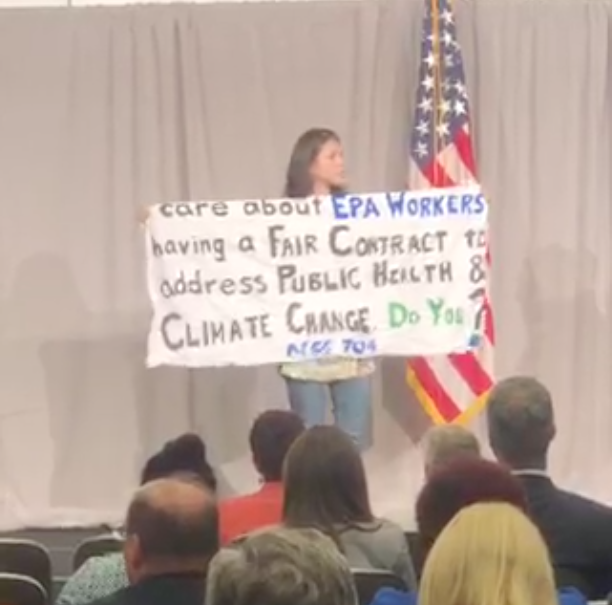 Targos told Government Executive she initially considered not attending the event because she “couldn’t stomach shaking hands with a member of this administration,” but ultimately decided to attend and speak out because she is a naturally “defiant person.” A colleague on her team took a different approach, Targos said, successfully petitioning EPA to have his name removed from the award altogether. Targos spoke with an EPA attorney she got in touch with through her union—the American Federation of Government Employees—who advised her not to swear or malign the administration.

She got nervous during her address, but managed to hit her key notes with Wheeler: resolve a labor dispute (the agency has unilaterally imposed a new contract on AFGE after faulting the union for failing to come to the bargaining table due to a disagreement over what should be subject to negotiation) and allow employees to fight climate change. Wheeler briefly responded, Targos said, to say the agency has tried to work with AFGE without success—a characterization the union disputes.

Aside from a few colleagues who reached out to congratulate her, Targos said she has not heard from her supervisor or anyone else at EPA. She said she generally gets along well with her bosses, but conceded she is “a little nervous” and does not know what will happen.

An EPA spokesperson declined to answer whether Targos could face disciplinary action.

“Administrator Wheeler was proud to host the National Honor Awards ceremony for the first time in 10 years and recognize the outstanding achievements of more than 700 EPA staff,” the spokesperson said.

Targos and Schoonover’s actions follow a long series of dust ups between the scientific community and the Trump administration, with federal employees and watchdog groups suggesting political concerns have led to improper interference and undue influence in the work of civil servants. Employees at agencies like EPA, NASA and the National Oceanic and Atmospheric Administration have told Government Executive they are facing unprecedented interference from political leadership, including rollbacks of previous work and meddling in research. Scientists reported being left out of key meetings, feeling fearful in their offices and a general sense of low morale. Inquiries from employees raising concerns to EPA’s Scientific Integrity office have spiked since Trump took office.