Leadership ranks in the federal workforce were almost decimated in the first two years of the Trump administration according to data recently released by the Office of Personnel Management. Between calendar years 2016 and 2018, almost 8% of Senior Executive Service positions were vacated or remained empty due to a higher-than-usual level of voluntary departures and lower-than-usual number of accessions.

The Trump administration has been notable for its record-breaking levels of turnover in internal leadership and cabinet positions, as well as its inability to fill Senate approved executive vacancies. It has also seen an unusually large number of career civil servants resigning their posts in spectacular fashion, publicly alleging widespread disaffection and demoralization across staff, citing instances where “[Trump's] new political leadership ... repeatedly undercut and undermined career … staff,” and whose “actions in office have been … disturbing … delusional or deceitful.” The recent OPM data support these anecdotal patterns, with some caveats. 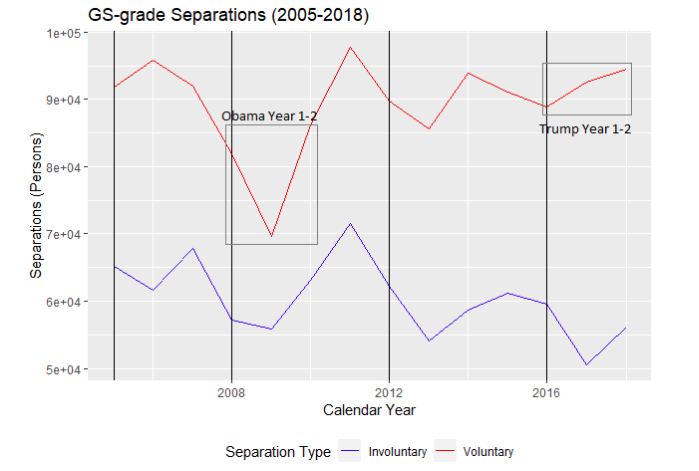 Among General Schedule grade civil servants, who form the bulk of the federal workforce, voluntary departures only increased marginally in the first two years of Trump’s presidency. During that period, the net number of GS-grades voluntarily separating increased by 5,536, from 88,918 in calendar year 2016 to 94,454 in calendar year 2018. The comparable number from the first two years of the Obama administration was an increase of 4,220, from 81,939 in 2008 to 86,159 in 2010. As a percentage of total departures, those two year deltas are 6% and 5% respectively for Trump and Obama; essentially the same.

The picture changes drastically when looking at federal employees in the Senior Executive Service. These are a mix of approximately 7,000 career civil servants and political appointees serving in leadership positions as “the major link between [Presidential] appointees and the rest of the federal workforce,” as the OPM describes them. 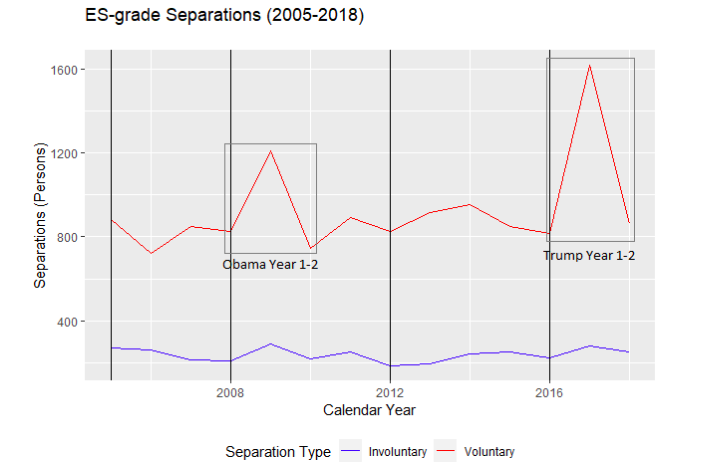 According to the OPM data, in the first year of the Bush-to-Obama transition, there was a 46% year-on-year spike in voluntary departures among SESs, from 826 in 2008 to 1,207 in 2009 (calendar years). As noted by the political science literature, losing executives in election years is not unusual because the proximity of SES positions to presidential appointees means they will be more sensitive to changes in administration, especially when the new administration is from a different party. By comparison, between calendar years 2016 and 2017, 1,616 senior executives voluntarily left government service, a year-over-year increase of 799 (98%), or more than twice the 2009 spike. Based solely on separations, many more experienced civil servants were willing to work through a change of administration under Obama than under Trump.

The higher rate of voluntary departures among workforce leaders would not have been as impactful had it been accompanied by a reciprocal increase in accessions, but that was not the case. In most years, after accounting for promotions, there is rough parity in SES-grade separations and accessions, which maintains the 7,000 personnel size of the SES corps. In the first year of the Obama administration, there was a 505 person spike in accessions to 942 from 437 the year prior. In 2017, however, the exodus of workforce leaders was matched by only a 347 increase in new leaders, resulting in a net deficit of around 526 senior executives, or approximately 8% of the total SES corps. Though the separations to accessions balance was restored in 2018, the level achieved was back to the average prior to 2017, meaning the deficit from 2017 was not made up in 2018. 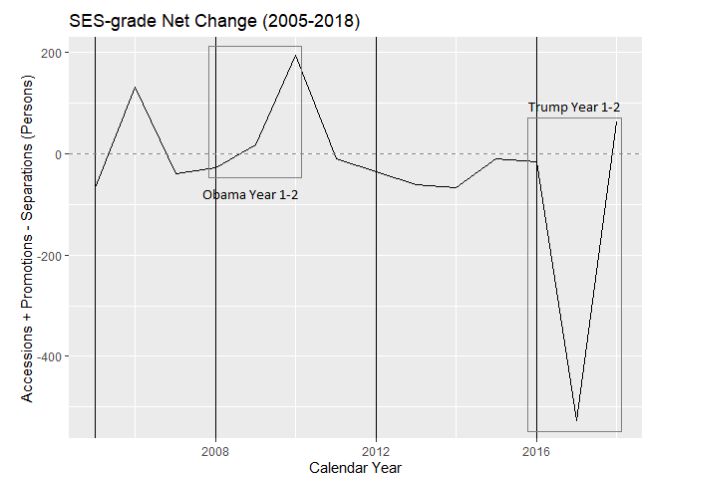 It is worth noting that the unusual patterns resulted solely from changes in voluntary departures and accessions. Separations resulting from involuntary causes such as retirements, deaths and reductions-in-force remained as normal, meaning the observed patterns were not the result of deliberate executive action to “drain the swamp.”

On the upside, despite the net exodus of executive civil servants, rank-and-file members generally persisted through the transition. While anecdotal reports have suggested widespread demoralization in the federal workforce, according to these data, whatever demoralization occurred was not general or significant enough to cause an unusual amount of attrition among GS-grade civil servants.

In dollar terms, the unusually high attrition among senior executives signified a larger reduction in the federal payroll than if the same number of GS-grades had left. However, the reduction in payroll was also accompanied by a reduction in institutional stores of professional experience and bureaucratic knowledge. The average length in service of SES separees is 21 years, 15% possess a graduate degree, and 91% have at least an undergraduate degree. By comparison, GS-grade separees average 11.5 years in service and 9.5 years of education. On the basis of resumes, the net loss of SES civil servants under Trump marked the loss of many of the most educated and experienced members of the federal workforce.

Further, with so many leadership posts vacant, it’s almost certain that the GS-grades that remained in service operated with less direction, oversight, and mentorship during the period in question. Except to the most die-hard anarchists and deep-state conspiracists, this net loss in federal workforce leaders cannot be viewed as anything but a blow to a well-functioning bureaucracy.

Daniel Lim received his MS in statistics and PhD in political science from UCLA and is a former active duty Army Officer. He currently works at a software startup in the SF Bay Area.