The coming year in the federal contracting market highlights an interesting tension between the opportunities that new technology and big data bring, and the challenges of budget uncertainty and industry consolidation. Big data and cybersecurity are fundamentally changing the way both agencies and contractors do business. The landscape is further complicated by agency use of Lowest Priced Technically Acceptable awards and unprecedented merger and acquisition activity. Cybersecurity spending will continue to climb, but in other areas, Govini predicts continued downward pressure on pure services businesses.

As the Internet of things megatrend gains even more momentum, the interest in and spending to protect data will reach new heights in 2016. Federal cybersecurity spending has quintupled over the last three years, topping $30 billion in fiscal 2014 alone. While the largest category is related to Defense Department cybersecurity hardening, the need for Defense-grade cyber capabilities on the civilian side will increase in 2016. A good example of this is the recent $1 billion DHS DOMino contract award to Raytheon to strengthen security for .gov domains across federal agencies. Historically, cybersecurity spending has focused on securing networks related to national security, but in fiscal 2014, spending shifted to broader capabilities. 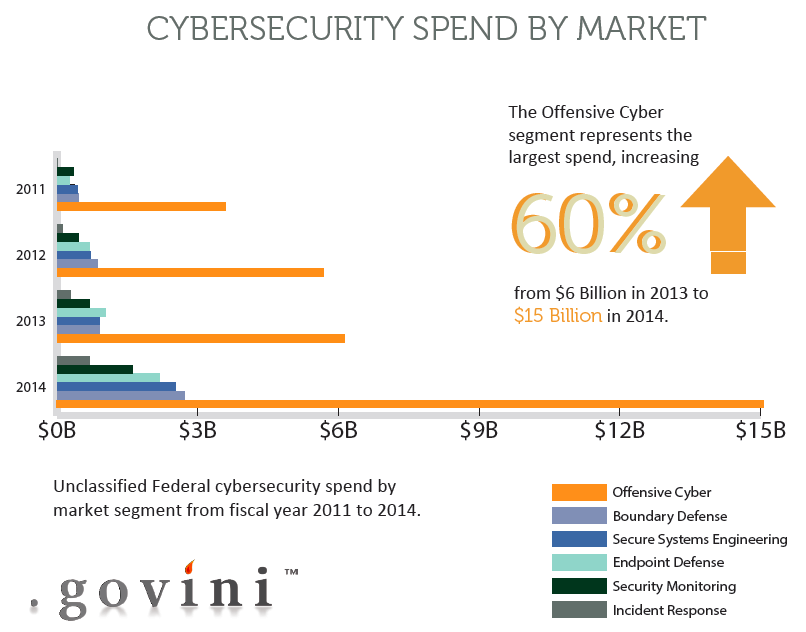 The coupling of big data and transparency initiatives brings unprecedented insights for both agencies and the contractors serving them. Using analytics, it is now possible to have an agency-wide, and even a government-wide, view of a market, from services to products. Exploring agency relationships with vendors reveals who is buying, what they’re buying, and how much they’re paying. Agencies can use these insights to better understand their own buying patterns and recognize opportunities for efficiencies, while contractors can better target their customers and explore market adjacencies.

Open government efforts also bring visibility into the tangled web of subcontractor relationships and their competitors. The 2006 Federal Funding Accountability and Transparency Act now requires prime contractors to report subcontractor awards above $25,000. Subcontracting data reveal that partnering and teaming is more common in a handful of industries. Over the last three years, the top five North American Industry Classification System categories accounted for 60 percent of all subcontract obligations.

Within the aerospace and defense category, competing firms partner with each other frequently, and their subcontractor relationships are anything but faithful. Five of the top 10 prime contractors named to the 2015 Washington Technology Top 100 -- Northrop Grumman, Raytheon, SAIC, General Dynamics and Boeing -- also appear among the top 10 prime contractors overseeing subcontract obligations. Lockheed’s largest partner by contract obligations, Boeing, is also a competitor that has relationships with other competing primes. Much of Lockheed’s subcontracting relationship with Boeing involves test launch, ground support and development of control units for Patriot missiles sent to Kuwait and Taiwan through the Foreign Military Sales program.

While there are some short-term benefits for agencies using Lowest Price Technically Acceptable awards, over the long term they put agencies at a pricing disadvantage. Agency reliance on LPTA has inadvertently fueled monopoly positions for larger contractors while squeezing contractors and suppliers in the middle of supply chains.

The effect of consolidation in services contracting in 2015 was best illustrated by the CSC acquisition of SRA to achieve better economies of scale. Govini data show that CSC held the fourth-highest position in the market in award revenue, while SRA was in eighth place. The combined CSRA not only created the largest pure-play information technology and services provider, but also balanced the CSC portfolio through a strong position with health agencies and access to new contract vehicles.

Another new juggernaut was created by the CACI acquisition of L-3’s government services business. Already razor-thin services margins will be shaved again in 2016, spelling trouble for the smaller contractors that are forced to compete on price and creating increasingly monopolistic positions for the few remaining contractors who can now command higher prices.

In IT as well as aerospace and defense, platform ownership is now critical for primes looking to command a premium on related services. The owners of intellectual property tied to platforms will see an increased competitive advantage in 2016. Competing on IP instead of price allows contractors to disrupt LPTA efforts and increase their margins. This is best illustrated by Lockheed Martin’s 2015 purchase of Sikorsky. It was aimed at not only owning aerial platforms, but creating a giant in the contractor logistics support market that services them. Lockheed Martin had previously been a key logistics supplier to Sikorsky, but now the company will own platform support and maintenance. The combined entity had almost $7 billion in unclassified awards in fiscal 2010-2014.

As 2016 unfolds, a big data approach will help both agencies and contractors better navigate a rapidly expanding cybersecurity market, because the volume of procurement data makes it impossible for humans to keep up with the velocity of desired capabilities and opportunities. While consolidation and spin-off chaos will create market uncertainty, contractors can use business intelligence, fueled by data transparency, to quickly model how mergers and acquisitions activity will impact their markets. And big data will only become more powerful as information becomes richer and more comprehensive. The passage of the Digital Accountability and Transparency Act will further improve visibility into budgets and obligations over next several years.

Eric Gillespie is founder and CEO of Govini, a business intelligence firm that provides a database of government spending and proprietary analytics to companies that sell to the public sector.