Agencies say they are now trying to reverse that trend.

Despite its promises to slash federal rolls, the Trump administration has actually overseen a slight uptick in the size of the civil service workforce. That governmentwide increase of around 3,000 employees, however, masks the fact that nearly every federal agency has cut positions under Trump, some by double-digit percentages.

The overall increase in federal employees hired on a permanent basis is driven primarily by the three largest agencies in the federal government: the Defense, Veterans Affairs and Homeland Security departments. The Trump administration has prioritized hiring at all three, while issuing mandates that all other agencies establish plans to cut jobs.

Top administration officials have since walked back that priority, saying agencies are now focused only on filling vacancies. The numbers paint a different story, however, as all but those three Cabinet-level departments have shrunk their workforces.

The chart below shows data from the Office of Personnel Management. The most recent information is from September 2018, which is compared here to September 2016—just four months before Trump took office—to provide a consistent baseline. It also shows only employees hired on a permanent basis to avoid the variability of seasonal federal jobs. 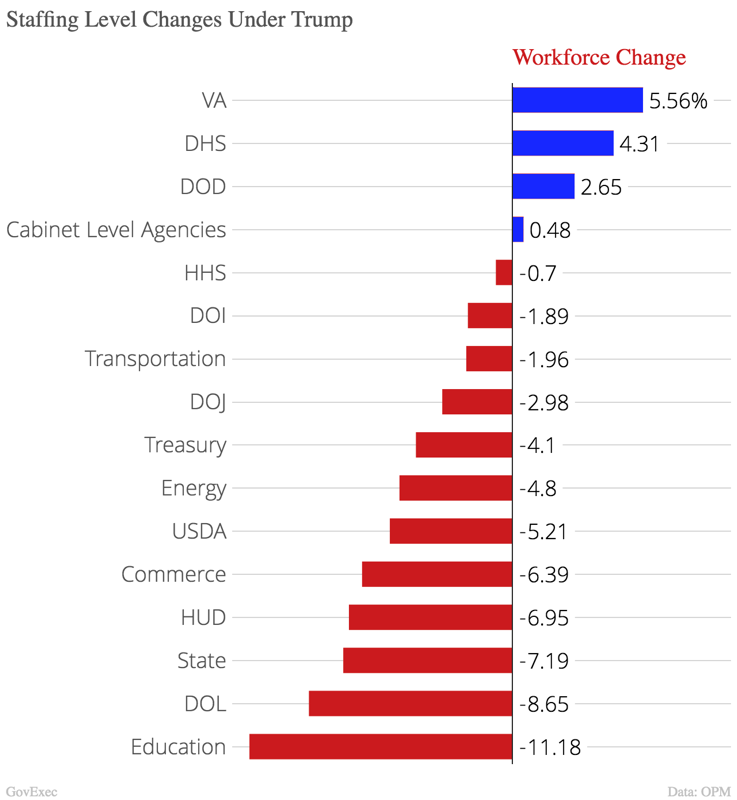 The administration has also cut jobs at all but four large, non-Cabinet agencies with at least 1,000 employees. 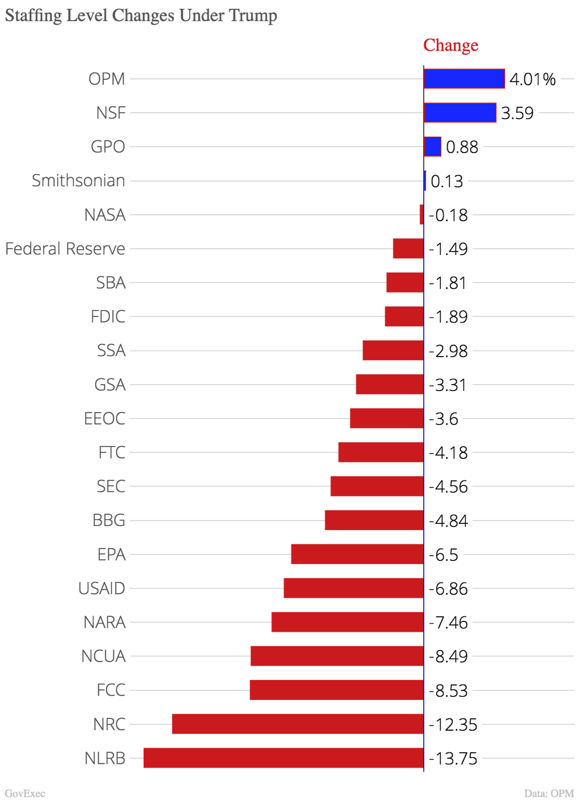 The Office of Management and Budget issued a memorandum in April 2017 calling on agencies to come up with both immediate and long-term plans to cut jobs. That followed a governmentwide hiring freeze Trump instituted shortly after taking office. OMB Deputy Director for Management Margaret Weichert has subsequently said the administration is now looking to staff up agencies and reskill federal employees who work in jobs that can be automated. She has repeatedly suggested the administration has no interest in cutting the federal workforce. One official told Government Executive it was “untrue and misleading” that the administration was trying to reduce the size of the federal workforce.

Agencies have used various methods to shed employees. The Environmental Protection Agency and Interior Department initially offered separation incentives to workers, though Congress has since blocked those efforts. Other agencies have relied on attrition. Some agencies have started actively trying to reverse the natural trends of an aging workforce.

The State Department, for example, kept a hiring freeze in place until Secretary Mike Pompeo ended it last year and has shed about 7% of its workforce. A spokesperson noted the department had developed a plan to reduce its workforce by 8% in conjunction with OMB’s memo, only to ultimately reverse those efforts when required to do so by Congress. It now has new targets to boost hiring above the level stipulated by lawmakers, the spokesperson said.

Jerry Brown, a spokesman for the Housing and Urban Development Department, which has lost about 7% of its employees, said HUD is putting new measures in place to add employees.

“We are not actively cutting jobs,” Brown said. “In fact [HUD is] utilizing tools that are available to us to retain employees we consider flight risks, particularly as it relates to critical retirement-eligible employees.”

HUD has more employees eligible to retire than any large agency in government. More than one-in-four workers could retire today, which will jump to 40% in three years. The department is budgeted for nearly 7,600 employees, but employs just 90% of that number. Brown said HUD “increased our focus on hiring efforts” when the department's workforce dipped below 7,000 employees last summer. He noted those efforts were stalled by the shutdown, but the department is hoping to regain momentum as it reduces its average time to hire.

“It’s important to note that we have not targeted a reduced staffing level and are doing everything we can to reverse the trend and bring our staffing level into alignment with the funding that’s been provided for staffing,” Brown said.

A Labor Department spokesperson also said its staffing cuts were not attributable to any "targeted reduction," but rather the result of retirements that were part of "a normal business cycle."

The department "is committed to protecting the health and safety of the American workforce and has directed agencies to hire the necessary staff to carry out that mission," the spokesperson said.

A spokesman for the Education Department, which saw the largest Cabinet-level workforce reduction, at 11%, declined to provide a comment in time for publication.