Even low earning feds have higher financial well-being scores than their non-federal counterparts.

Most federal employee groups say their members are weary, suffering from repeated sacrifices and low morale.

According to one survey, however, federal workers are “thriving.”

The measurement is a composite of the “perceptions of standards of living, affordability of basic necessities and financial woes based on region of country, family size, cost of living, debt and various other factors that go into subjective assessments of financial situations,” Gallup noted, not just salary or overall compensation.

Both the lowest and top earners in the federal government are more apt to be “thriving” than their non-federal counterparts. One in four federal workers making less than $2,000 in household income each month still experience strong and consistent financial well-being, the survey found, compared to just 15 percent of other workers. Six in 10 of feds earning more than $10,000 in monthly household income are financially thriving, compared to 54 percent of other workers.

While many have argued compensation for the federal workforce is bloated and far outpaces the private sector, studies examining that comparison have displayed mixed results. Several conservative-leaning think tanks have published comparisons showing federal employees earn more than their private-sector counterparts, though the more fed-friendly Federal Salary Council said feds’ pay lags behind industry pay by 35 percent. A 2012 Government Accountability Office study concluded there is no definitive way to measure any potential gap. A Congressional Budget Office report found that public and private sector salaries were about comparable, but that education level played a role in pay disparities between the two groups. 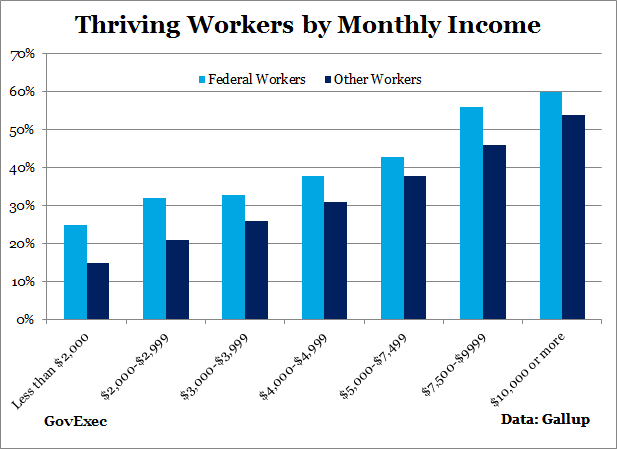 The survey results are based on one year of telephone interviews that began Feb. 16, 2014, as part of the Gallup-Healthways Well-Being Index. Gallup surveyed a random sample of 80,223 full-time employed adults aged 18 and older, with a 2 percent margin of error.