Pay & Benefits
Feds Were Feeling a Lot Less Generous in 2013

Donations to the Combined Federal Campaign dipped 19 percent in 2013 over the previous year, marking the fourth consecutive year of declining contributions for the federal government’s annual giving drive.

With 162 of the 163 local CFC administrators reporting their totals, federal employees had committed $209 million to the campaign in 2013, according to a tally by the Workplace Giving Alliance. One group in southwest Montana has not yet submitted its totals, so the alliance estimated that group’s donations at 80 percent of its 2012 total. An OPM spokeswoman said the agency is still verifying the 2013 totals.

The 16-day government shutdown occurred in the middle of the 15-week solicitation period for 2013, prompting the Office of Personnel Management to give federal employees an extra month to pledge donations.

During the solicitation period, which opened Sept. 1, charities often attend events held at agency offices nationwide to promote their organizations, and CFC officials -- both local organizers and agency employee volunteers -- educate the federal workforce about the program. During the shutdown, however, many agencies sent home the vast majority of their workforces, making CFC efforts nearly impossible. Even agencies that retained a more significant portion of their workforces canceled CFC events.

The 2013 total is by far the lowest the campaign has raised since at least 2004. In addition to the shutdown, federal employees faced a third consecutive year of frozen pay, tight budgets and furloughs due to sequestration cuts.

Here is a chart of the CFC pledge totals in each year since 2004: 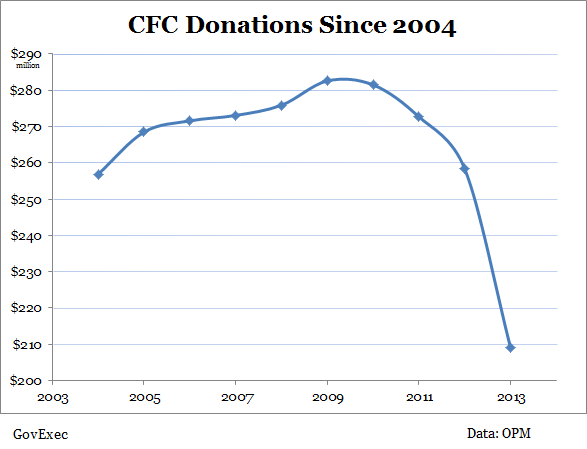 ( Top i mage via Kwiatek7 / Shutterstock.com )

NEXT STORY: What Happens to Your Life Savings?