About 900,000 feds, almost half the civilian workforce, must take unpaid leave during the shutdown.

During a government shutdown, federal agencies decide which employees to furlough and which to keep on the job. Excepted employees include workers “who are performing emergency work involving the safety of human life or the protection of property or performing certain other types of excepted work,” according to furlough guidance from the Office of Personnel Management. In other words, they aren’t furloughed. Employees who are not funded through annual appropriations are exempt from unpaid leave if the government shuts down.

How many employees an agency furloughs during a government shutdown varies, and tends to depend on mission. At some departments, including Veterans Affairs, most of the workforce stays on the job. At the Education Department, however, the opposite is true: Most employees are furloughed.

The National Science Foundation, for example, will furlough 99 percent of its 2,000 employees. The Office of Government Ethics (not shown below) will retain just one worker throughout the shutdown. The Housing and Urban Development Department is worst off among Cabinet-level agencies, sending home 96 percent of its workforce.

Overall, about 43 percent of the federal workforce will face furloughs during the shutdown. Aside from the three largest agencies -- the Defense, Homeland Security and Veterans Affairs departments, which excepted or exempted a large number of employees -- a majority of feds will be furloughed. At all other agencies, about 61 percent of employees will be forced to take unpaid leave.

All told, roughly 900,000 civilian employees will go on unpaid leave. Here’s a snapshot of a few agencies. The list of agencies and corresponding data are not comprehensive. 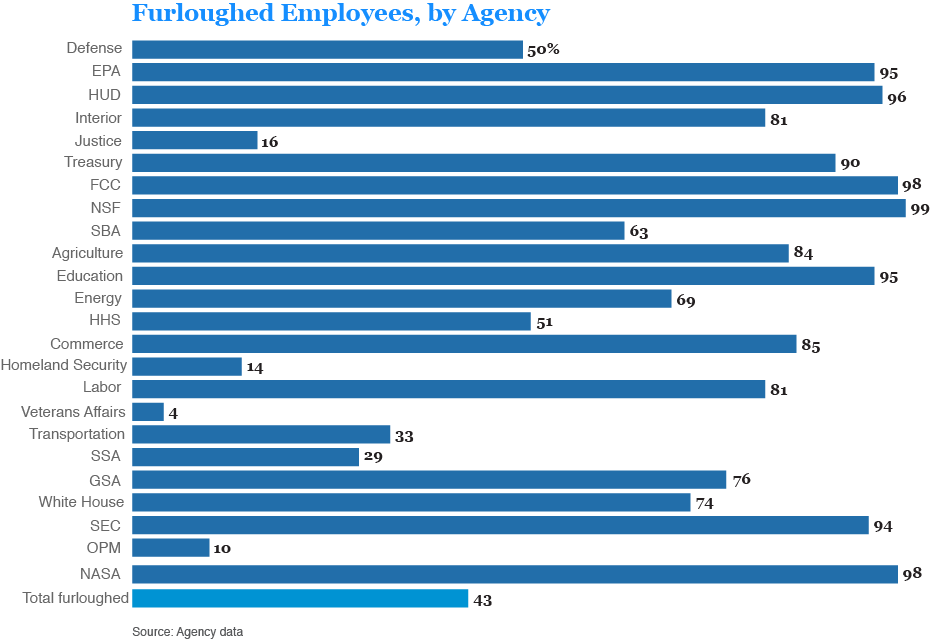 *Total furloughed does not include the State Department. State spokeswoman Jen Psaki said Tuesday that for now the agency is furloughing a "small, minimal" number of its employees.