Oversight
What kind of health insurance do the GOP candidates get?

Most of the GOP presidential hopefuls do not shop for health insurance in the individual market they have advocated for others. 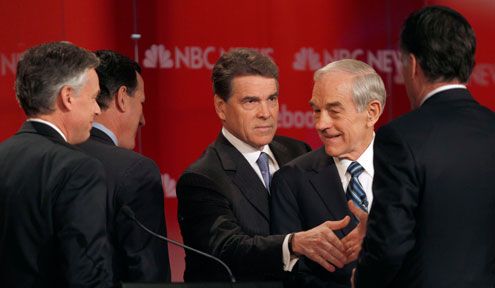 Mitt Romney's rivals may enjoy repeating his line that he likes "being able to fire people who provide services to me," but when it comes to health insurance, he has the luxury of choosing among several coverage options, thanks to the health care reform law he signed in his home state.

Romney, like all his rivals for the Republican nomination, says he would like to repeal the 2010 health care reform law, privatize parts of Medicare, and create a system in which more people shop for health insurance on the individual market. But that's not the option most of the candidates have taken for their personal health care-which is not surprising, considering that the individual market is generally the most restrictive and most expensive place to buy health insurance.

The Romney campaign refused to say where he gets his health care coverage. But because of the health care reform law he signed as governor of Massachusetts, he is lucky to live in one of the few states with good insurance options for a 64-year-old unemployed man with a wife who has a preexisting health condition: multiple sclerosis. Massachusetts law, like a provision of the national health care law set to go into effect in 2014, requires insurers to offer coverage to all comers and limits the amount they can raise premiums because of a customer's age or health history. The Romneys have a choice of 41 private health plans, with premiums ranging from $997 to $1,026 a month.

"His experience in Massachusetts would be profoundly different from any other state," said Sara Iselin, president of the Blue Cross Blue Shield of Massachusetts Foundation and the former commissioner of the Massachusetts Health Care Finance and Policy Division.

Only one other candidate buys his insurance on the individual market. Rick Santorum, the 53-year-old former senator from Pennsylvania, is enrolled in insurance that "is totally private, and not related to his time in Congress," his spokesman, John Brabender, said in a phone interview. And if Republicans succeed in their stated goal of repealing "Obamacare," Santorum likely won't be firing his insurer any time soon. One of the first pieces of the health reform law to go into effect was a ban on denying coverage to children with preexisting conditions. His youngest daughter, Isabella, suffers from a rare genetic disorder that requires ongoing and costly treatment, just the sort of preexisting condition that makes her look like a poor insurance risk. All insurance plans issued after March 23, 2010, must cover children up to age 19, regardless of prior illnesses.

Many of the Republican presidential nominee hopefuls enroll in public-employee benefit programs that give them the advantages of large-group pricing-and heavy taxpayer subsidy of their premiums. Newt Gingrich, 68, is enrolled in Medicare and buys his own supplemental insurance from Blue Cross Blue Shield, according to his campaign. Paul, 76, as a member of Congress, gets his insurance coverage from the federal-employee benefit program, his campaign says. Rick Perry, 61, gets his insurance from the state of Texas, a benefit he can continue to receive for the rest of his life. (According to the Texas Tribune, Perry is already collecting a state pension, even while he earns his salary as governor.)

Huntsman's campaign also declined to say what type of plan the former governor has. At 51, he is the youngest in the field, making his options for individual coverage better than the others. Utah has its own insurance exchange, but the choices are slim for individual customers, especially when compared with the Massachusetts Connector health exchange. The Utah Health Exchange website merely offers individual insurance shoppers links to five insurance company websites that provide individual coverage in the state. The exchange also lacks many of the consumer protections that Massachusetts offers.

Several of the candidates qualify for multiple government plans. Perry and Paul could apply for benefits through the Veterans Affairs Department because of their military service. Santorum will eventually qualify for the federal-employee benefit plan. Paul is eligible for Medicare. (It is a strange twist that Paul, the candidate most committed to dismantling public benefit programs, finds himself eligible for health benefits from three of them; for his part, he has said publicly that he doesn't use the insurance he has.)

The candidates are lucky to have large personal fortunes and access to public insurance plans. Unlike Massachusetts, most states have no requirement that insurers take customers with health problems, and many allow them to vary pricing tremendously based on age. (And let's be honest: These guys are not spring chickens.)

"It is difficult for the average person to get coverage in the individual market, but we're not talking about average people, in a number of ways," said Paul Fronstin, the director of health research at the Employee Benefit Research Institute, a think tank funded by the business community.

Fronstin said that until the health care reform law kicks in in 2014, insurance companies in most states can deny anyone based on potential preexisting conditions. The cost of coverage in the individual market, which can run as high as $15,000 for a year of family coverage, can also be prohibitive. But the biggest difference between the candidates and the general public is a history of holding public office.

"You're talking about people who have had public service, and public service tends to have the most-generous retiree health benefits at this point," Fronstin said.

One goal of the health care reform law is to set up state insurance exchanges so that individuals in every state will have access to an array of choices like those currently available to the Romneys. If any of the candidates succeeds in repealing that law, shopping around for insurance and firing companies that don't perform are likely to get harder, not easier.