SES employees will get input from colleagues at a variety of levels, official says. 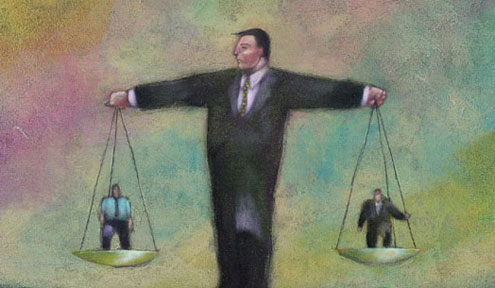 The new performance management system recently announced by the Office of Personnel Management will require all federal agencies to favor the demonstration of leadership qualities over more technical performance measures, according to a member of the system's working group.

Agencies already consider Executive Core Qualifications to evaluate Senior Executive Service members. The qualifications include: leading people, leading change, results driven, business acumen and building coalition. Under the new system, however, the weight given to ECQs and to performance metrics will be the same across all agencies.

"This is going to focus people back on the fact that SESers are supposed to be more concerned about managing and leading, or equally concerned, if you will," Michael Kane, chief human capital officer at the Energy Department, told Government Executive. Kane was a member of the working group that created the new system .

At Energy, for example, 60 percent of an executive's evaluation is based on "tech milestones," considerations such as: "Did I get the project done? Did I have five physics experts?" he said. The remaining 40 percent of the evaluation would be based on the leadership attributes.

Tools like employee value surveys and retention rate reviews can be helpful in measuring those nebulous qualities, but Kane admits that the new system still will require "an adjustment." The new system encourages surveys of employee performance will be "360s" -- where all SES employees, including top secretaries, must get input from colleagues at a variety of levels - something that's worked at DOE he said.

While the new performance evaluation system will not affect senior management pay levels, it does make appraisal systems more uniform and transparent since all agencies will have the same criteria. In the past, some agencies had more stringent standards than others, according to Kane.

This push toward uniformity does not apply to implementation dates of the new system, however. Every agency will implement it on its own timelines, Kane said.

A standardized approach also will eliminate some bureaucracy in the certification process federal employees undergo to become members of the SES. In the past, all federal agencies had OPM and the Office of Budget Management review applications on a cyclical basis and award conditional approval or reject employees seeking to become senior executives. Many hiring decisions on various ends of the SES pay scale would get held up through the certification process, Kane said.

The new process will "reduce the likelihood that you're going to stay in conditional approval forever and a day and focus in on more standard elements;" he added.

The Senior Executives Association, however, is concerned that the new system might "tighten the level of performance," its president, Carol A. Bonosaro said last week.

Some senior executives have expressed concern over whether they will be rated fairly under the new system, fearing an Obama administration could give out lower performance ratings for its own political benefit, Bonosaro said, adding that under the current system, "plenty of executives have seen their ratings lowered without explanation."

The Energy Department is among agencies involved in GEAR -- goals, engagement, accountability and results -- a pilot effort to reform the evaluation system for General Schedule federal employees. OPM, the U.S. Coast Guard, and the Housing and Urban Development and Veterans Affairs departments also are participating. Kane said the pilot involves some of the same elements as the new SES system.

"One of the things GEAR is saying is, 'Hey, you have to have a marriage between the CHCOand the agency's performance improvement officer, the person who is looking at quantifiable performance," Kane explained.

"The two have to be together because you can't separate organization performance from people," he said. "That's a big change."

NEXT STORY: Romney sweeps to victory in New Hampshire primary