Management
Trump Cut 13K Federal Jobs in First Year, But 3 of His Recent Predecessors Outdid Him

The Trump administration cut nearly 13,000 federal jobs in its first year, reversing a trend of growing government in the closing years of the Obama administration but failing to live up to the workforce-shrinking precedents set by several recent presidents during their inaugural 12 months.

The vast majority of the 12,900 federal workers cut during President Trump’s first year left during his first few months in office, according to data from the Bureau of Labor Statistics. The administration shed 11,000 employees in Trump’s first six months, a time period that included a temporary presidentially-mandated hiring freeze. That freeze was lifted in early April, though several agencies have continued the moratorium and have offered separation incentives to encourage more employees to leave.

Despite Trump’s promise throughout the campaign and the opening weeks of his administration to drastically reduce the federal workforce, and a memorandum calling on all agencies to develop plans to immediately shed employees, the president has made less progress to that end than many of his recent predecessors. Presidents Reagan, George H.W. Bush and Clinton all cut more civil servants during their their first year in office than Trump did. Federal agencies in both President George W. Bush and Obama’s first years in office beefed up their staffs, adding nearly 125,000 jobs in Obama's first year. 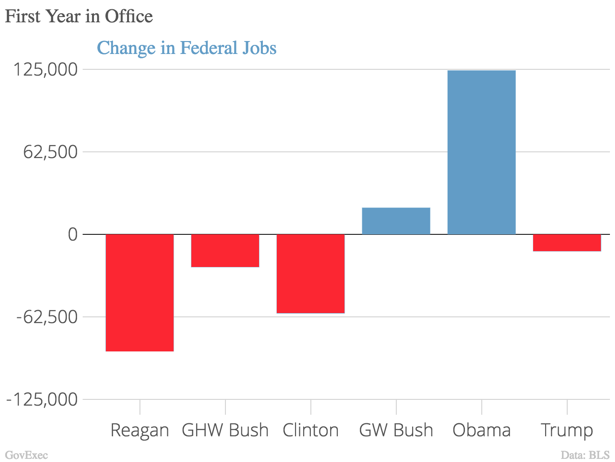 The Trump administration is aiming to move more quickly in slimming the rolls of federal agencies in the coming years, as agencies will unveil their long-term plans to reduce their workforces in the White House’s forthcoming fiscal 2019 budget proposal, due to be released on Feb. 12.

Trump’s audacious fiscal 2018 blueprint called for a net reduction of only 1,000 civil servants, as job losses at most agencies were set to be mostly offset by gains at the Defense, Homeland Security and Veterans Affairs departments. Agencies have survived so far only on stopgap funding measures, but Congress has largely rejected the severe cuts the White House put forward. VA and DHS, meanwhile, have struggled to recruit and hire at a pace that keeps up with attrition.

The administration has succeeded in reversing a trend from the Obama administration, which added net federal jobs for each of its final three years. That followed a significant decrease in which agencies cut tens of thousands of workers after they were forced to quickly reduce spending due to the implementation of budget caps under the 2011 Budget Control Act. Reagan and Clinton were the only presidents of Trump’s immediate five predecessors who ended their presidency with fewer federal employees in government than when they started, with Clinton overseeing a far more dramatic net decrease. 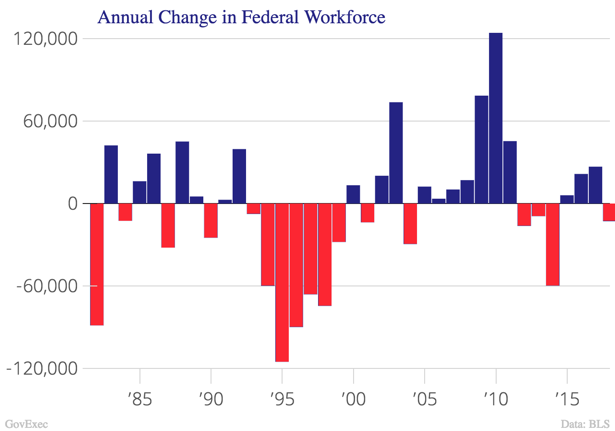 NEXT STORY: Focusing on the Positive: Rewarding Good Workers and Managers