One in four feds say they will not be able to carry out their agencies' mission under Trump.

The majority of federal employees disapprove of the way President-elect Donald Trump is handling the transition process, according to a new poll, and just one-third think he will be at least partly effective at managing government.

Nearly six in 10 federal workers expressed disapproval of Trump’s transition in a Government Business Council/GovExec.com survey, with 27 percent expressing approval. Sixty-two percent of feds ultimately voted for Democratic presidential nominee Hillary Clinton, while 28 percent voted for Trump. Clinton widened her lead significantly over Trump from July, when the same survey found her holding just a 5 percent lead over her Republican opponent, and dwarfed even the 19-point lead she held as of October. 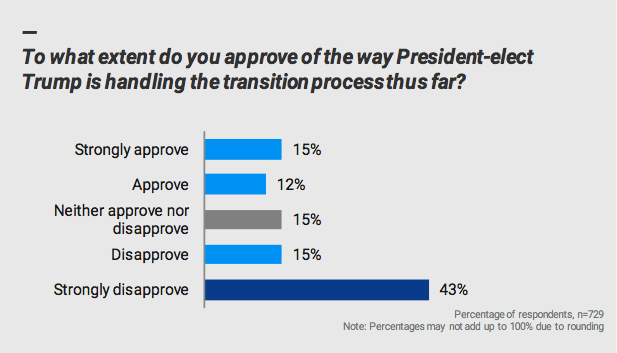 Half of federal employees said the incoming Trump administration will be only a little or not at all effective at managing the day-to-day operations of government, compared to one-third who said it will be at least somewhat effective. Just 20 percent of respondents predicted Trump would have a positive impact on their agency while 48 percent said he would have a negative impact.

Feds are also not impressed with their soon-to-be more direct bosses, according to the survey results. Just 35 percent said they are at least somewhat confident Trump’s appointee to lead their agency will do so effectively, while 44 percent expressed little confidence.

About one in four respondents -- 26 percent -- said they will not be able to carry out the missions of their agencies in the Trump administration, while 38 percent said they will. 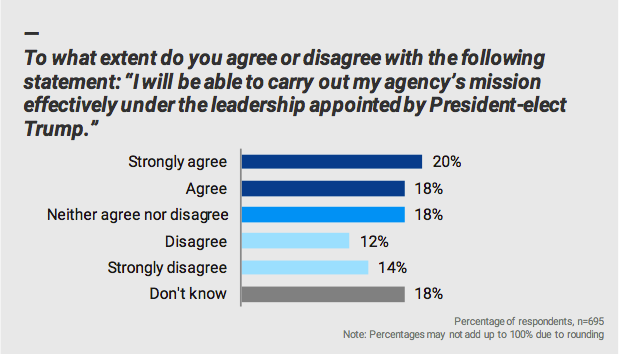 Government Business Council released the survey on Jan. 11, 2017, to a random sample of Government Executive, Nextgov, Defense One, and Route Fifty subscribers. The survey included responses from 745 federal employees, with representatives from at least 36 federal and defense agencies. The poll has a margin of error of plus or minus 4 percentage points.