In fiscal 2016, according to USASpending.gov, federal agencies issued more than $650 billion in grants—more than 16 percent of overall federal expenditures (and an even larger part of discretionary spending). Given President-elect Donald Trump’s focus on infrastructure and immigration, it is likely that even more money will be spent in the coming years via grants. The Obama administration launched an initiative to move toward evidence-based grant-making that has much potential, but is in great need of hands-on guidance. Calls for evidence typically exceed both legislative and data infrastructure limitations.

In order to obtain a current picture of the landscape for federal grants management, the George Washington University and REI Systems conducted the first national survey of grant managers in the United States in September 2016. The results of that survey can help us better understand the state of grants management and what the incoming administration might do to improve it.

The research has led us to conclude:

The charts below show the top six federal grant-makers. Grants have grown quickly, and the Department of Health and Human Services is the biggest grantor.

In the survey, the responding grant managers reported that their most significant challenges are:

The most significant factors that survey respondents report as consistently leading to success are: 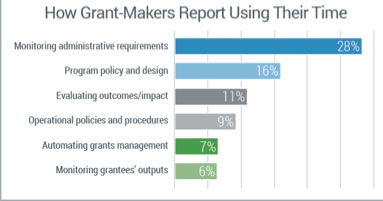 Respondents dedicate far more of their time to competitive grants (55 percent) than to formula and block grants (25 percent total), probably as a result of the lower risks associated with formula and block grants, which are often made to states and counties. However, those same low-risk grants may not encourage innovation or efficient use of funds at the rates that competitive grants do.

Only 36 percent of respondents are satisfied “to a great extent” or “a lot” with the technology available to them. Most managers felt either neutral or negative. Even fewer respondents believed that grantees could afford or would be able to find access to adequate software—which may cause significant issues in terms of reporting results for money granted. It also raises the question of whether grants are well-used if granted funds are used to purchase similar software for each of the thousands of grant recipients.

While the majority of grant managers surveyed found enough data to monitor compliance with administrative requirements, fewer than 40 percent of respondents indicated that sufficient data was available to “evaluate and select grantees” or to “evaluate overall program outcomes and impact.” Additionally, fewer than 30 percent found sufficient data to “identify best practices and lessons learned.” Responses indicate that, even when innovation happens, grant makers have a hard time noticing it and—and even if they do, they may not be able to share the ideas or success stories that come from that grantee innovation.

Finally, survey respondents see value in recent executive directives and legislation related to grants, but express a need for help rationalizing them and make them work together. The three best-received such directives/legislation included:

What the Trump Administration Could Do

Survey results included open-ended feedback, which led us to identify several issues with grants management and potential responses to them from the Trump administration.

Problem: Grants are intended to promote innovation, because grant recipients operate programs “close to their customers.” However, a widespread focus on compliance may limit creativity.

Approach for the new administration: Allow grant applicants to define problems and solutions, rather than restricting them to a narrow focus on problems the government has already noticed. Dedicate a meaningful portion of appropriate grant programs to innovation (at least 5 to 10 percent).

Problem: Grant makers don’t have open, easy-to-use lines of communication or ways to share success stories with each other—or even with their own grantees.

Approach for the new administration: Use executive authority to create a strong grants management community centered on effective management, just as the Office of Federal Procurement Policy and the Chief Acquisition Officers Council lead initiatives to focus on effective procurement. The Office of Management and Budget is the logical place to put such leadership.

Problem: Grant recipients face a wide range of reporting requirements and spend significant resources on systems, processes and staff in order to meet reporting requirements, instead of using those funds for the grant’s mission objective. When a recipient receives grants from more than one federal agency, this becomes even more challenging.

Approach for the new administration: Use executive authority to develop standards for grant reporting (similar to those in the DATA Act), in order to reduce the burden of grants management on grantees, improve accountability, and make it possible to evaluate return on investment across grants. Set an explicit target for grant maker administrative costs (as a proportion of grant funding disbursed) for each major type of grant.

The George Washington University, the National Grants Management Association and REI Systems are working to strengthen the community of grant makers. Specific initiatives include Grants Management Breakfast Forum events, monthly training sessions from NGMA and evaluation, education and thought leadership from GWU. Together, we are considering working to create grant-maker’s idea exchange, modeled on Wikipedia. It would start by drawing heavily on NGMA’s Grants Management Body of Knowledge, but would rely on community members to share their insights.