“Rude” employees at U.S. Postal Service locations could cost the cash-strapped agency nearly $300 million in fiscal 2015, according to a report.

The USPS inspector general said in an audit released last week that negative customer feedback increased 9 percent from fiscal years 2012 to 2013. Overall, 20 percent of customers said they were treated “worse than other retailers” by postal employees.

Part of the problem, the auditors found, was collective bargaining agreements with unions that mandate USPS management select sales associates positions based on seniority rather than suitability for the job. Other retailers, the IG said, ensure workers are up to the task of face-to-face customer interaction before placing them in a position that requires it. Once the employees are designated sales associates, the report said, “resolving serious issues related to that employee, such as persistent discourteous behavior, can be difficult and time-consuming.”

The American Postal Workers Union, cited directly in the report, said the customer service problem is not that employees are rude or misplaced, but that there are simply not enough of them.

“The No. 1 complaint of postal customers is the waiting time in line, which is caused by understaffing,” APWU’s Clerk Craft Director Clint Burelson told Government Executive. “We urge postal management to correct this problem and give the people the service they want and deserve.”

Another major barrier to better customer service, according to the report, is a lack of training dedicated to those skills. Auditors described it as “informal” and without a “mandatory process” for managers to observe and provide feedback to their workers. Noting the 20 percent dissatisfaction rate, the IG said the Postal Service is risking $288.5 million in fiscal 2015 by incentivizing unhappy customers to take their business elsewhere.

In a word cloud the IG created to demonstrate the frequency with which postal customers described their experiences on a survey, the word “rude” was displayed most prominently. 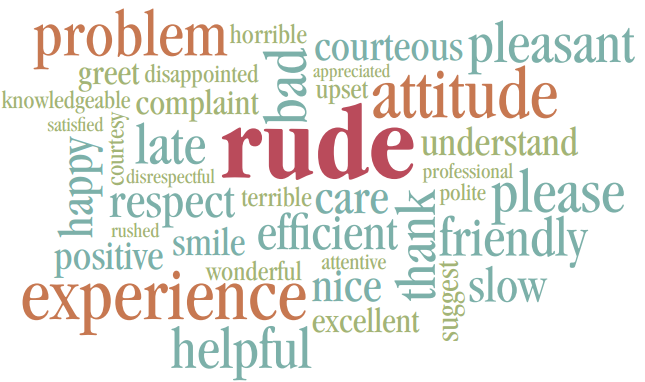 Postal management -- which has long touted the Postal Service’s relative customer service advantage -- dismissed the IG’s findings out of hand, calling them “irrelevant.” James Nemec and Kelly Sigmon, vice presidents for consumer affairs and customer service operations, respectively, said in a letter to the inspector general that auditors used data from old surveys that have since been replaced. They added the fact that 20.5 percent of customers were not treated “with courtesy” does not necessarily mean all those customers would actually choose a different provider, thereby invalidating the $288.5 million figure. Nemec and Sigmon also said the Postal Service provides sufficient customer service training to its employees.

The IG’s office said it would use the new survey format -- which postal management says is shorter and garnering a better response rate -- in future analyses. It defended its findings, however, as it measured information based on “the most complete data available."

NEXT STORY: What Would Happen If You Let Go?