Management
The Federal Agencies Most Often Accused of Discrimination

The Labor Department was at the top of the list for Cabinet-level agencies.

More than 15,000 federal employees filed discrimination complaints against their agencies in fiscal 2012, a 6.7 percent decrease from the previous year.

Those complaints led to more than 10,000 investigations, according to a recent report from the Equal Employment Opportunity Commission, which were completed in an average of 187 days. The EEOC itself held more than 8,000 hearings in fiscal 2012, a slight decrease from fiscal 2011, though the average hearing processing time jumped to more than one year.

For the second consecutive year, the Government Printing Office held the ignominious title of agency with the highest percentage of its workforce to file discrimination complaints (among agencies with more than 1,000 employees). The EEOC itself was third highest on the list, climbing four spots from its fiscal 2011 rankings. Here are the five agencies with more than 1,000 employees with the highest complaint rates in fiscal 2012:

The Labor Department, the highest ranked Cabinet-level agency on the list, was recently labeled one of the worst places to work in federal government.

On the opposite end of the spectrum was the Federal Trade Commission -- recently identified as one of the best places to work in government -- which received zero discrimination complaints in fiscal 2012. Here are the rankings of the agencies with more than 1,000 employees that received the fewest discrimination complaints as a percentage of their workforces in fiscal 2012:

The governmentwide average complaint rate was 0.5 percent. Agencies were able to resolve slightly more than half of all discrimination concerns before reaching the formal complaint process.

Reprisal or retaliation was the leading basis for employee discrimination complaints, as it has been every year since fiscal 2008. Slightly less than half of complaints fell in that category, while about one in four were charges of racial discrimination against African-Americans. Overall charges of racial discrimination made up 38 percent of total complaints, equal to the percent in fiscal 2011. Non-sexual harassment, promotions and the terms and conditions of employment ranked as the top means by which employees felt discriminated against. This chart shows the total complaints in fiscal 2012 broken down by the top three bases for the complaint: 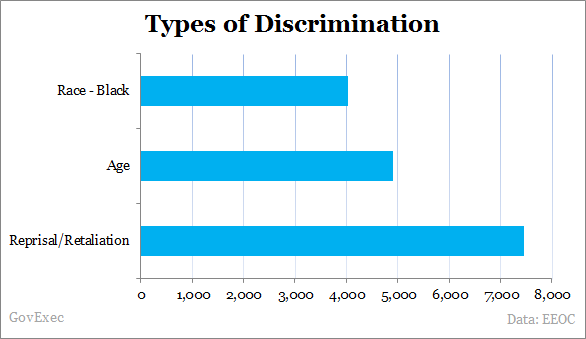 Between agency-employee settlements and EEOC findings of discrimination, agencies doled out a total of $51.4 million in monetary benefits in fiscal 2012, based on formal discrimination complaints. The sum marks an 18 percent increase from the previous year, and an average payout of $12,000. About 27 percent of complainants received monetary benefits as a result of their complaints.

Agencies were forced to pay out an additional $10.9 million to employees upon appeals in fiscal 2012, a 19 percent increase from the previous year. They also paid out $3.4 million in settlements before an employee even reached the complaint phase. The average pre-complaint settlement was $4,652 in fiscal 2012, which has consistently decreased since fiscal 2008. 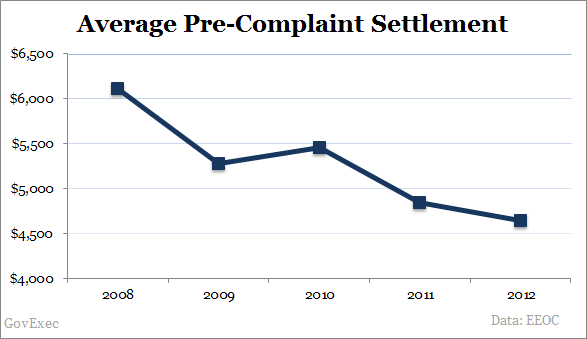 NEXT STORY: Why a Government Shutdown Is So Unlikely