Management
CDC ‘Should Be Leading the Way’ in Pandemic Decisions, Says Former Director

Management
CDC ‘Should Be Leading the Way’ in Pandemic Decisions, Says Former Director

Most new hires are going to the Defense and Veterans Affairs departments.

Federal agencies hired nearly half the number of employees in fiscal 2013 as they did four years prior, and the gap between employees leaving and joining federal service continued to grow.

The federal government hired about 77,000 new employees in fiscal 2013, according to a Partnership for Public Service analysis of Office of Personnel Management data, a 14 percent drop off from the previous year. The number of separating employees, meanwhile, remained steady over the last two years at more than 115,000 annually. New hires represented 4.2 percent of the federal workforce last year.

An overwhelming majority of employees hired last year -- four out of every five -- were from defense and security-related agencies, PPS found. One-third of all new hires came from the Veterans Affairs Department, while 36 percent came from Defense Department agencies. Here is a full breakdown of hires by agency: 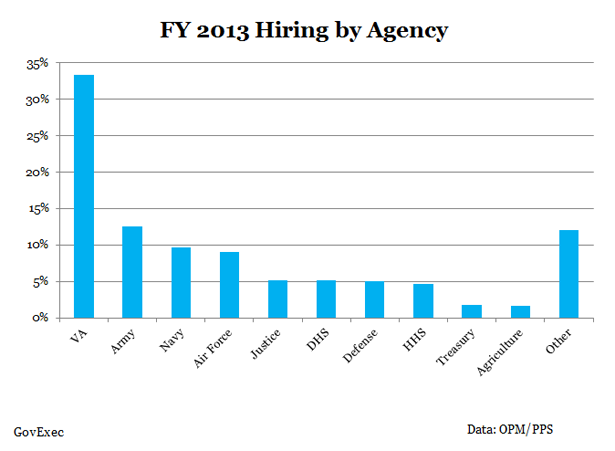 Agencies saw a dramatic uptick in STEMM (scientific, technology, engineering, mathematics and medical) jobs and veterans hiring. About 39 percent of new hires went to STEMM positions, while 45 percent were veterans. Both figures were up 10 percent over the last five years.

“The federal government needs to develop a strategy to recruit and retain a greater percentage of younger workers to build a pipeline for the future,” PPS wrote in its report.

A majority of new hires were in nine states and Washington, D.C. The top hirers were Virginia, Texas and D.C. This map shows the full breakdown: 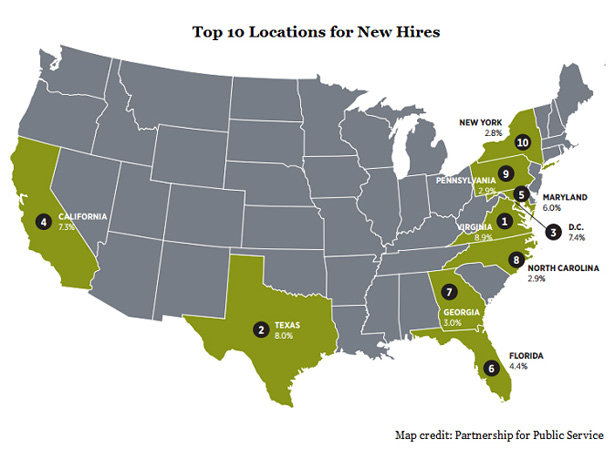