The Environmental Protection Agency’s chief this week encouraged Congress to reduce administrative hurdles involved in firing unruly employees, who have plagued the agency in recent months.

House Oversight and Government Reform Committee members pressed EPA Administrator Gina McCarthy at a hearing on why employees who spent hours each day looking at pornography continue to be on the government’s payroll and why an employee was able to get away with defrauding the agency for an extended period of time. McCarthy said she would “welcome” measures to expedite the removal process.

“Any way we can make these processes move more quickly, I’m all for it,” McCarthy said in response to an intense round of questioning from Rep. Jason Chaffetz, R-Utah. “But there is an administrative process we must follow.”

Chaffetz said those procedures “might be something we’re going to have to address, because why these people don’t get fired on the spot I just do not know.” McCarthy said it would be “great” if Congress took up the issue.

“I would hope the EPA and other government agencies would come to us with a request for authority to more quickly sever people are so flagrantly [flouting] good judgment and law.”

McCarthy said eradicating fraud and abuse is particularly important in order to honor all the work of the agency’s dutiful employees.

“As administrator, I believe it is my obligation to provide the leadership and stewardship needed to ensure we grow the kind of organization that the dedicated, hardworking, professional public servants at EPA deserve,” she told the committee. “I am proud of them, and I want each of them to be proud of EPA.”

Despite the recent string of mischievous behavior, the EPA firing rate for discipline or performance has remained well below that for the federal government as a whole. As the chart below demonstrates, the EPA has fired about one in 1,000 employees each of the past five years, while the governmentwide rate is five times that: 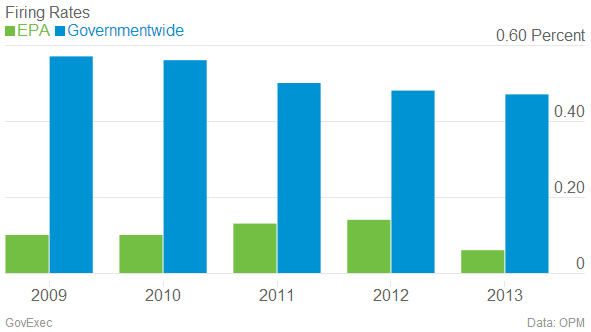 It is perhaps worth noting, however, the EPA workforce has shrunk nearly 9 percent since 2009, one of the highest attrition rates of any government agency in that period.

The red tape involved in firing civil service workers has been a hot-button issue in recent weeks, with a slew of lawmakers looking to ease the process at the Veterans Affairs Department. Both the House and Senate have passed measures to remove termination hurdles, with the House legislation allowing for more immediate firings. The final language of that bill will be resolved in a bicameral conference committee .

Federal employee advocates and legal experts have deplored efforts to strip federal workers of employment protections, arguing they are constitutionally guaranteed and necessary to maintain a depoliticized civil service.

NEXT STORY: The Talent Your Organization Needs May Already Be on the Payroll