Attention is shifting to processing times and rolling out continuous evaluation to the entire clearance population.

The National Background Investigations Bureau can be proud of reaching a milestone many didn’t think would be possible—reducing a 710,000+ backlog of pending investigations by nearly 40% and within reach of a steady state in less than a year.

The Performance Accountability Council released its cross-agency priority (CAP) goals update last week. Among the highlights are the reduction in the backlog and advancements in eAdjudication and personnel vetting—and NBIB’s backlog busting investigation figures.

Officials with the Office of the Director of National Intelligence have previously stated that phase one of the security clearance reform effort was targeted toward the backlog. Now the focus turns to revamping the policy, updating the IT framework, and making continuous evaluation a reality.

NBIB’s progress report comes as Defense Department officials move forward with plans to take over the entire background investigations process at the start of the new fiscal year on Oct. 1. A White House executive order signed in April required Defense and the Office of Personnel Management to confirm plans to transfer the background investigation process from OPM by June 24. A Pentagon announcement on Monday named current NBIB Director Charles Phalen as the acting director of the newly created Defense Security and Counterintelligence Agency.

“You're going to end up with a pretty large agency that is soup to nuts security,” said Phalen, speaking to a group of reporters in May. DCSA takes on the investigations, physical security and counterintelligence mission for Defense. It will also conduct investigations for a host of government agencies including the State and Homeland Security departments, which have relied on NBIB to conduct background investigations for their employees.

DCSA will take the helm of the personnel security program with significant improvement on the backlog, but with one major milestone unachieved: Security clearance processing times remain far above goals.

For the fastest 90% of all cases (Defense and Intelligence), an initial Top Secret security clearance still takes an average of 356 days to adjudicate. As the government moves to continuous investigation of clearance holders, the average time for completing periodic reinvestigations has grown to 441 days. Why does PR processing time matter? For many cleared professionals, the ambiguity of having a PR linger for years creates issues with clearance portability and job change. 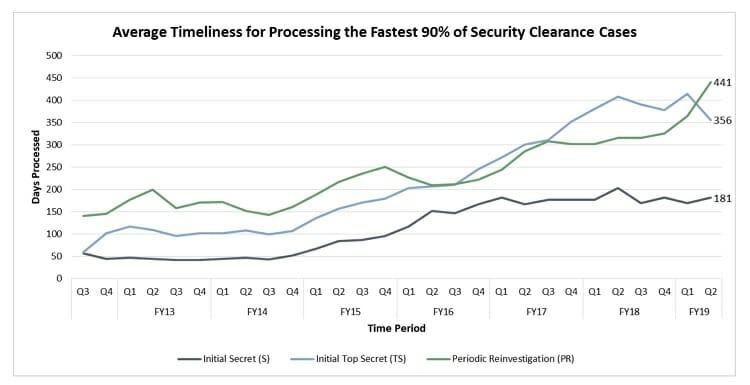 While the clearance process still takes far too long,  some industry officials are beginning to see improvement.

“From an industry perspective, we can definitely state the older cases—cases over 180 days—are being worked off in larger numbers,” said Charlie Sowell, chief operating officer of iWorks and the National Industrial Security Program Policy Advisory Committee representative for the Professional Services Council. He noted that industry cases that have been outstanding the longest are beginning to be worked though. As NBIB continues to get complex cases out the door, the overall security clearance processing times should begin to improve, Sowell noted.

When it comes to making progress in clearance processing times, Sowell said it’s also important to remember there are three phases to the security clearance process, each of them operating independently. Often delays can be triggered by issues in the initiation phase (the actual completion and submission of the SF-86 security clearance application), and in the adjudication process. NBIB is only responsible for the investigation.

“NBIB doesn’t hold the keys to how long it takes somebody to get a clearance,” said Sowell. Even when the investigation is complete, delays in adjudication timelines can linger into months or years, a factor too often overlooked in discussions about the security clearance reform process.

An Air Force veteran complains his adjudication has been in process for eight months now, and getting any information from the Defense Central Adjudication Facility has been impossible.

“The Department of Defense Consolidated Adjudication Facility was also impacted by the many events that led to the current 700,000+ backlog of investigations, and when the Office of Personnel Management stood up the National Background Investigations Bureau and turned the taps back on after sorting out their Federal and contractor investigator workforce, the caseload for the DoD CAF tripled,” wrote Marko Hakamaa, a security specialist and regular contributor to ClearanceJobs.

Between security clearance and suitability determinations, the DoD CAF makes approximately 900,000 personnel security actions each year. While the focus has been on the investigation process, the DoD CAF has its own backlog—and its own delays.

The other outstanding question apparent in the CAP goals update is the status of continuous evaluation. With both industry and applicants relying on continuous evaluation to move the needle on decreasing PR timelines, the number of clearance holders enrolled in CE has stalled, with actual drops in enrollment over the past year. 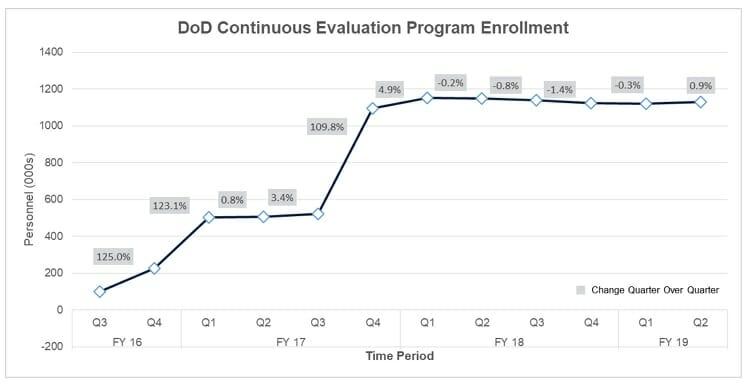 Officials have not stated whether delays are due to policy or technology, both of which have faced numerous hurdles in the journey to make CE a reality.

The CAP progress report signals how far security clearance reform has come. But with big milestones met on the backlog, more attention needs to be focused on areas where progress has stalled, specifically on improvements in security clearance processing times and rolling out CE to the entire clearance population. These major reform efforts may be on track, but they're far from finished.