Beyond their political impact, the attacks are threatening a core component of the U.S. strategy for winding down its involvement in Afghanistan. 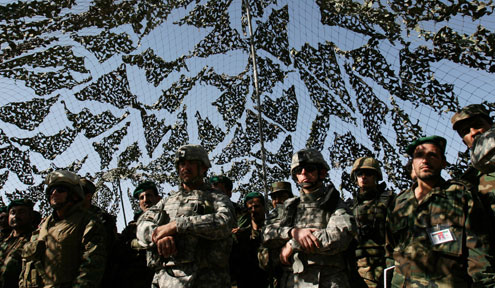 French leaders said they'd reevaluate whether to keep troops in Afghanistan after four French military trainers were gunned down by an Afghan soldier on Friday, underscoring that the biggest threat to Western political support for the long war may come from fratricidal attacks by partnered Afghan troops, not strikes by shadowy Taliban fighters.

The killings in northwest Afghanistan had immediate political repercussions thousands of miles away in France, where a visibly angry President Nicolas Sarkozy said his country would suspend all of its training operations in Afghanistan and assess whether to speed its withdrawal from the country.

"The French army is standing next to its allies, but we cannot accept that even one of our soldiers be killed or wounded by our allies," Sarkozy said. "It is unacceptable. I will not accept it."

Sarkozy's fury was spurred, in part, by the fact that a pair of other French troops had been gunned down by an Afghan colleague just weeks earlier. But it also reflected a broader dynamic within the U.S.-led military coalition. Afghan troops are killing record numbers of Western trainers, sapping public support for the war throughout NATO.

So far this year, a quarter of the 28 foreign troops killed in Afghanistan died at the hands of Afghan security personnel. A classified NATO report obtained by The New York Times found that 58 Western troops had been killed in 26 separate attacks by Afghan soldiers and police personnel between May 2007 and May 2011. The attacks that have occurred since last summer have pushed the tally closer to 70.

Many Western analysts believe the nationalities of the dead Western troops may matter as much as their sheer numbers. Military personnel from the U.S., Britain, France, Italy, Spain, and Germany have been killed by Afghan colleagues, prompting politicians in each of the countries to call for reevaluating whether to continue fighting in Afghanistan. That means the Taliban's best hope of splintering the U.S.-led coalition may come from finding more Afghan troops willing to turn their guns on their Western trainers.

"These attacks are certainly more about sapping political will than simply trying to inflict direct casualties," said Jeffrey Dressler, an Afghan expert with the Institute for the Study of War. "If the French decide to pull their troops out as a result of this incident, it's only going to encourage the insurgency to increase these attacks and try to force other countries out as well."

Senior U.S. military commanders in Afghanistan have regularly tried to play down the significance of the fratricidal attacks, arguing that they stemmed from personal grievances rather than systemic Taliban infiltration of the Afghan armed forces or anti-Western feelings within the Afghan army and police force. That was the explanation given after an Afghan soldier killed five British troops in November 2009, after a police recruit killed two Spanish trainers in August 2010, and in the aftermath of a wave of similar incidents.

Earlier this week, for instance, the Air Force said a months-long investigation into an Afghan colonel's killings of eight American troops and a U.S. contractor last April concluded that the officer had methodically planned the attack but carried it out without any clear ideological motivation.

The military's continued public insistence that the killings of Western troops by their Afghan colleagues were motivated by factors other than insurgent sympathies came in for harsh criticism in the classified report obtained by The New York Times . Such statements, the report concluded, were "disingenuous, if not profoundly intellectually dishonest."

"Lethal altercations are clearly not rare or isolated; they reflect a rapidly growing systemic homicide threat (a magnitude of which may be unprecedented between 'allies' in modern military history)," the report said, according to the newspaper.

Beyond their political impact, the attacks are threatening a core component of the U.S. strategy for winding down its involvement in Afghanistan. The Obama administration has ramped up its training efforts for the Afghan army and police, hoping that the Afghan personnel assume will be able to assume security responsibility for their own country and clear the way for the withdrawal of American combat troops.

But the fratricidal attacks by Afghan security personnel are complicating that training mission by forcing Western forces to question the loyalties of their Afghan colleagues, limit their participation in joint missions, and consider the imposition of new protective measures - like barring Afghans from carrying weapons on shared bases or building separate sets of living quarters - which would inevitably strain the relationships between members of the two forces.

"It's sort of a catch-22," said Bill Roggio, the editor of Long War Journal , a Web site that closely tracks the Afghan war. "Our plan is to turn the country over to the Afghans, which means training them to take over. But they're killing the guys we have doing the training."