Those contributing to Trump’s campaign overwhelmingly came from the Defense and Homeland Security departments.

Federal employees have donated at least $1.8 million to the major candidates for president in 2020, with nearly 60% of that total going to former Vice President Joe Biden.

Since the start of 2019, Biden has raised $1.06 million and Trump has raised about $743,000 from federal workers at cabinet-level agencies, according to data from the Federal Election Commission and compiled by Government Executive. That marks a significant change from 2016, when 95% of federal employee donations went to Democratic nominee Hillary Clinton.

Trump’s donations overwhelmingly came from the two largest departments in the federal government: Defense and Homeland Security, which made up 58% of his federal workforce contributions. By contrast, Defense and DHS employee donations made up just 24% of Biden’s total haul. Some labor groups at DHS, including the council representing Border Patrol workers, have endorsed Trump and fervently supported his presidency. Trump has frequently touted the support he holds among the law enforcement community writ large.

Labor Department workers donated most overwhelmingly to Biden, with 91% of their total dollars going to the Democratic nominee. That was followed by the Justice Department at 85%, the Education Department at 84% and the State Department. Trump’s top donating agencies were DHS at 65% of contributed dollars, Defense at 63% and the Energy Department at 48%. Biden also held only a narrow advantage from employees at the departments of Commerce and Agriculture. 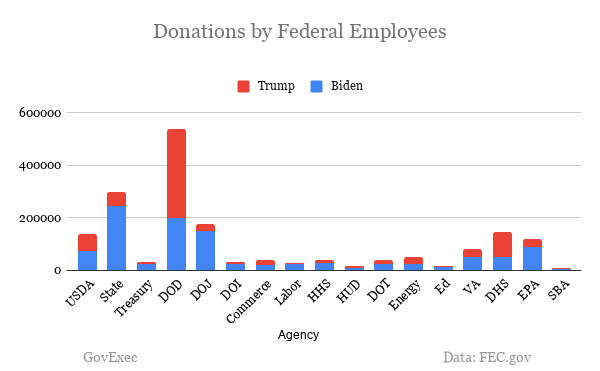 Biden’s lead in campaign contributions among the federal workforce nearly matches his spread over Trump in the head-to-head matchup among the same group. A survey by GovExec and the Government Business Council last month found the former vice president up 60% to 32% over Trump with federal employees.

According to an analysis by The Hill four years ago, federal employees had contributed about $2 million in the presidential race, with about $1.9 million going to Clinton. In 2012, The Hill found, 14% of contributions from feds went to Republican nominee Mitt Romney.

Under the Hatch Act, federal employees are prohibited from engaging in political activity, including making or soliciting donations, while on the clock or acting in their official capacities. In any other context, however, they are free to engage in the political process.