One in three feds are concerned about impeachment's impact on morale, survey finds.

A majority of federal employees support impeaching President Trump, according to a new survey released hours before the House votes to take that step for just the third time in U.S. history.

Just 43% of federal workers oppose impeaching Trump, compared to 52% who support it, according to the survey conducted by the Government Business Council, the research arm of Government Executive. Top-ranking civil servants at the GS-13 level and above are more likely to support impeachment, with 57% in favor compared to 46% of those at the GS-12 ranking or below. 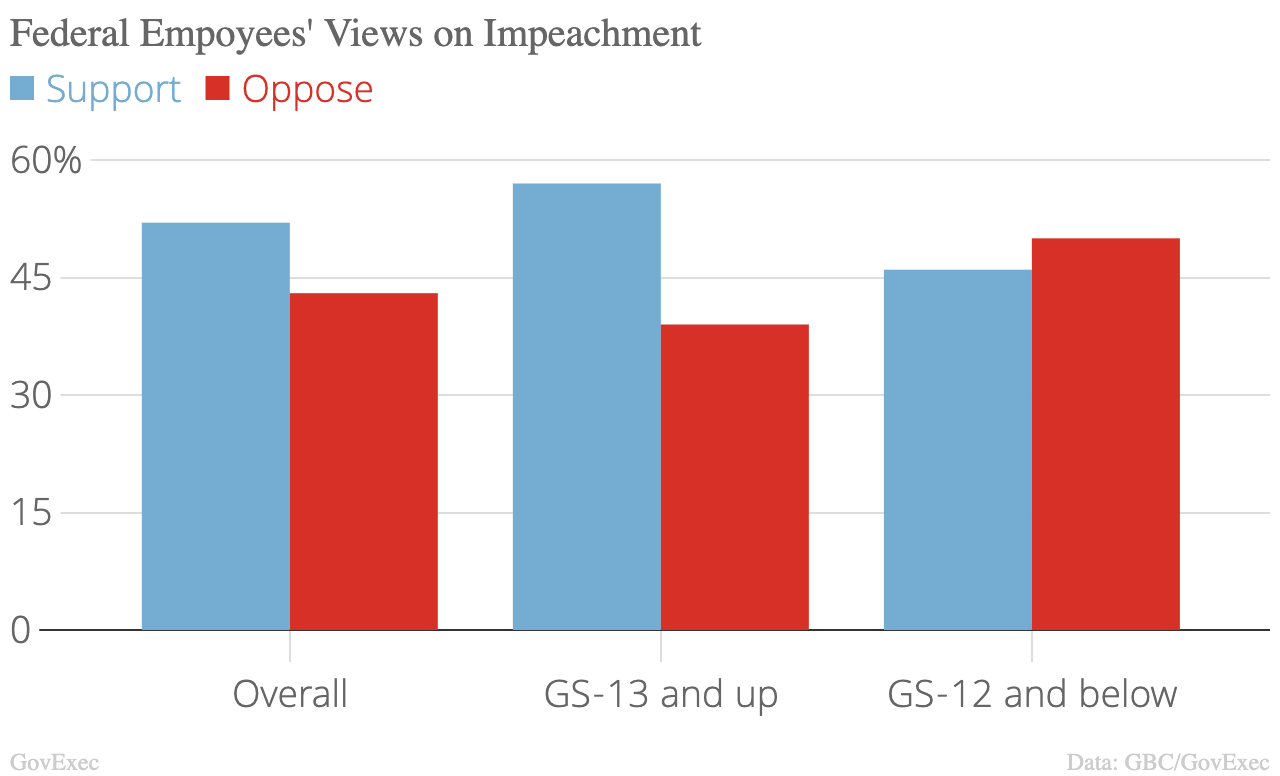 Not all feds who oppose the president support impeaching him: Just 37% of employees approve of Trump, compared to 55% who disapprove. One-in-five Republican federal workers gave Trump negative marks.

About nine in 10 Democratic feds support impeaching Trump, compared to about half of independents and 19% of Republicans.

Half of respondents said the rhetoric surrounding the impeachment process, specifically on whistleblowers and the “deep state,” has had a negative impact on their perception of their own safety. Two-thirds of Democratic feds have felt concerned for their safety during the impeachment process, compared to slightly more than one-third of Republicans. One-in-three feds said they are now less likely to report wrongdoing to the appropriate authorities due to attacks by Trump and congressional Republicans on the whistleblower whose filing kicked off the impeachment proceedings. Another 16% said they are now more likely to blow the whistle.

Trump told Ukraine President Volodymyr Zelensky that former U.S. Ambassador to Ukraine Marie Yovanovitch was “going to go through some things,” according to a transcript summary released by the White House of a call between the two leaders. He later accused those who supplied information to the whistleblower of being spies, saying we “used to handle it a little differently than we do now.” Several witnesses who testified at the impeachment hearings said the lack of support from leadership has led to declining morale at the State Department and elsewhere. House Democrats’ official impeachment report cited Trump for sidelining and threatening career employees.

One-third of federal employees also said the impeachment process has hurt morale in their workplaces, compared to 8% who said it has boosted morale. Feds who oppose impeachment were more likely to say the process has damaged morale. Nearly two-thirds of feds said the process had worsened the public perception of the civil service, with the rest saying it has had no impact. Four in five Democratic respondents said it has created a worse perception of the civil service.

Among Democratic federal employees, about half are at least moderately satisfied with the field of candidates running for president. About one-quarter are not satisfied. Nearly half have not yet decided which candidate they are supporting, far surpassing those who have not made a decision among the general public. Former Vice President Joe Biden received  support from 15% of the Democratic respondents; South Bend, Indiana, Mayor Pete Buttigieg received 12%; and Sen. Elizabeth Warren, Mass., received 8%.

The survey was sent to a random sample of Government Executive Media Group subscribers from Dec. 4 through Dec. 15. It has a margin of error plus or minus 4%. See the full survey results here.

NEXT STORY: NASA Ranks as the Best Place to Work in Government for Eighth Year