There’s one mistake that the leader of Futures Command wants to avoid.

As the new U.S. Army Futures Command begins to develop a variety of small, medium, and large ground robots, its commander says he wants to avoid a common mistake: pushing new gear on field commanders who don’t really need it.

“I’m not going to force anything on a unit or soldiers that they don’t want,” Gen. Mike Murray told reporters on Thursday. “Not that that’s ever really happened in the past, but we tend to push stuff out in experimentation that doesn’t fit the mission profile that they’re after.”

“It’s going to have to be more of a pull than a push as we start to really develop knowledge across the Army in some of the things that we are working in. If a commander expresses a need for it, we’ll be happy to provide the capability,” Murray said.

For example, a top U.S. officer in Afghanistan is interested in bringing supply robots back to the front lines.

“Brig. Gen. Scott Jackson, who is a good friend and commander of SFAB 1” — the 1st Security Force Assistance Brigade — “saw a demonstration of what we are calling SMET, which is basically...a semi-autonomous supply vehicle. We’ve had some with soldiers at the 1st and 10th Mountain [Divisions] experimenting with them over the last couple of months. Jackson is interested in potentially taking them with him on his next mission,” he said. 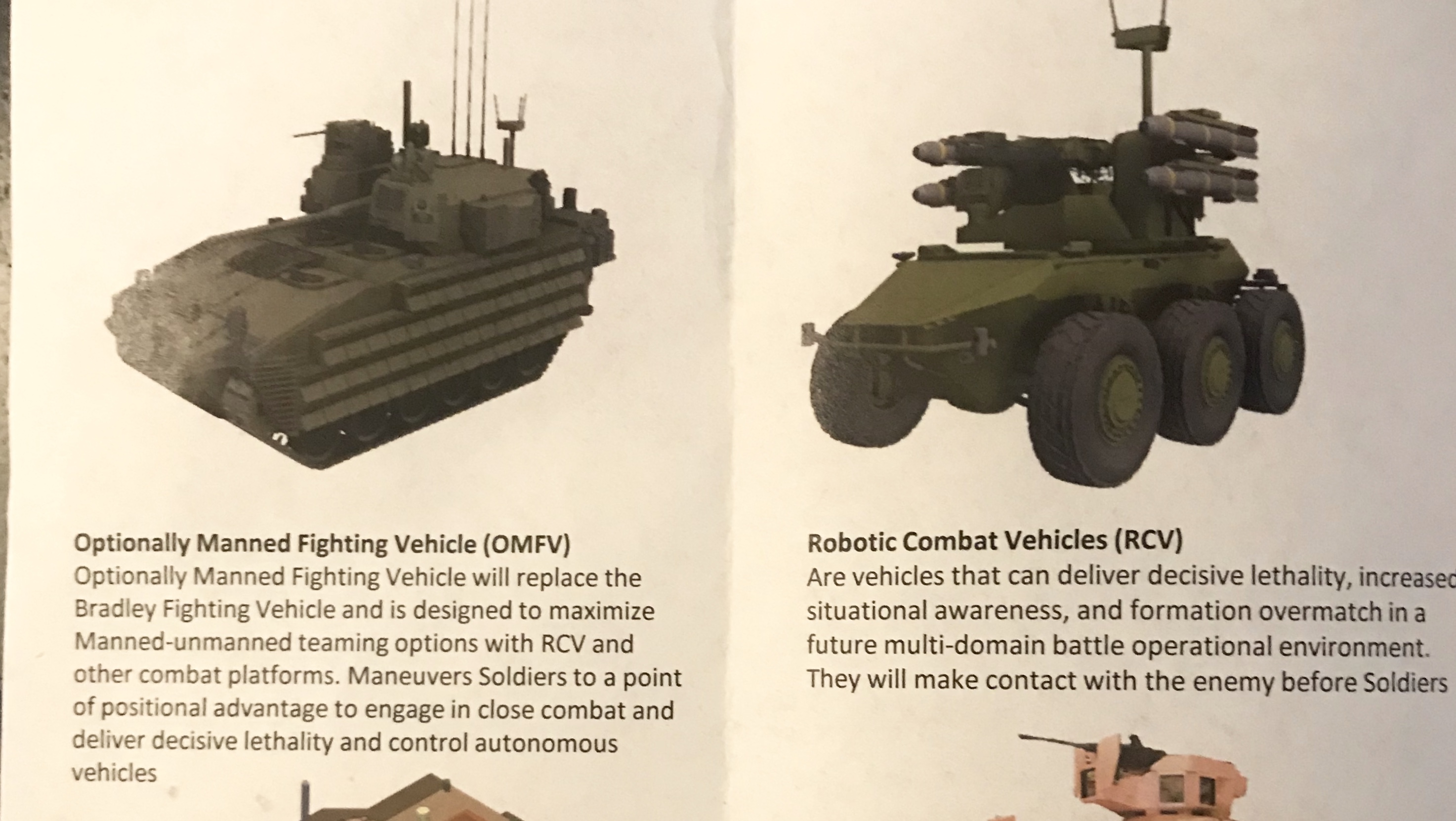 A page from a pamphlet distributed by the U.S. Army to press describing the next-generation robot combat vehicle.

It is also planning a suite of three Robotic Combat Vehicles that will “make contact with the enemy before soldiers” to provide “increased situational awareness and formation overmatch,” according to a command document distributed to reporters.

The Army is already developing a light RCV, with a request for industry participation on a medium-sized version to come within days. A heavy version is also planned.

The Futures Command has an ambitious testing and experimentation schedule as well. They’ve announced plans to conduct a live-fire experiment with ground robots next year.

In 2020, said Brig. Gen. Richard Coffman, who leads the next-generation combat vehicle crossfunctional team, “we’re going to do an experiment at the platoon level, so think four robots and two control vehicles. Each control vehicle will control two robots. In 2021, we move to the company level, that will be six control vehicles and 12 robots. Those will be the same four from experiment one, and then four RCV lights and four RCV mediums to make a company. That company, we’re really going to learn a lot and go to school on that before we go to the third experiment in Fiscal Year 2030.”

It’s not the first time that the Army has tested ground robots, of course. And it’s not the first-time that they’ve been to the front lines. In 2007, the Army sent three remote-controlled special weapons observation remote reconnaissance direct action system, or SWORDS, robots, armed with machine guns, to Iraq. But they were pulled from the front lines before ever firing a shot after they began to move unpredictably.

Since then, the military has been conducting a variety of experiments that incorporate robots into drills. In a 2017 exercise in Michigan, a ground robot fired live rounds from a .50-caliber machine gun.

But that same year, the Russians were testing unmanned ground systems in Syria. “Most of these were [intelligence, surveillance, and reconnassaince] and demining vehicles: Uran-6, Scarab and Sphera “ unmanned ground vehicles, said Sam Bendett, a member of CNA Corporation’s Center for Autonomy and AI.  “Around that same time, Russia tested Uran-9 combat UGV — it discussed its failures in April 2018. The Russian military also may have tested a Soratnik mid-sized UGV in Syria around the same time, although official statements were that Soratnik was tested in ‘conditions close to real combat,’” said Bendett.

“So far, all these UGVs are teleoperated/remote-controlled. Uran-9 was supposed to be a real test of whether such vehicles could be operated at a safe distance from actual combat, but that did not happen, as vehicle breakdowns forced the operator to be only several hundred meters away. As a consequence of the Syrian tests, the [Russian Ministry of Defense] is working on a UGV control system capable of more independent action in combat. Another major development thrust for the Russian military is manned-unmanned teaming that puts soldiers and UGVs in the same functioning unit, as well as UGV-UGV and UGV-UAV cooperation.”

Bruce Jette, assistant Army secretary for acquisition, logistics and technology, says that he’s not worried about trying to keep up with Russia’s ability to send remote-controlled robots into places like Syria. The demonstrations, while eye-catching, don’t show any great technological innovation.  “Teleoperation of robots is kinda a baseline of current technology. That’s what the Russians have done,” Jette said. “That’s sufficient for certain operations but that’s not sufficient for where we want to go.”

Jette said the Army’s research goal is the ability to move soldiers farther away from the field than remote-operated robots would allow, or as Jette put it, “the insertion of AI and the reduction of manpower necessary to accomplish the mission task, without having the soldier there. We need to move farther forward on that.”

Jette reiterated what Murray said about deferring to the judgment and needs of commanders in the field. “The user, not the acquisition community, will present that and decide whether or not it’s applicable to a current field use and then we will push it into the field. But I would tell you, just for the sake of saying, ‘put robots into the field,’ that’s not what we’re trying to do.”

NEXT STORY: The Apollo Engineer Who Almost Wasn’t Allowed in the Control Room