Most of the discussion of pay for federal employees in recent months and years has been about insufficient or non-existent raises, pay gaps and budget shortfalls.

Not all feds are making out so poorly, however.

A new database compiled by FedSmith.com , using data from the Office of Personnel Management and other agencies, shows more than 15,000 federal employees earned at least $200,000 in 2013. That’s roughly 1 percent of all federal workers on the list; some employees in national security positions were not included in the database.

The vast majority of the top 1 percent of feds were doctors at the Veterans Affairs Department. The highest earning employee was a Veterans Health Administration doctor in Pittsburgh, who took in just more than $400,000 last year. More than 1,200 employees made more than $300,000.

Other agencies that require a highly specialized workforce paid several employees at least $200,000, including the National Institutes of Health, Centers for Disease Control and Prevention, Food and Drug Administration, Office of the Comptroller of the Currency, Financial Housing Finance Agency, and the Securities and Exchange Commission.

All of these employees are paid on systems specific to their agency or occupation. Some of these systems have much higher pay caps than the General Schedule, which sets the salaries for the vast majority of federal employees and capped annual pay -- before adjusting for locality -- at just less than $130,000.

Even members of the Senior Executive Service have their pay capped at $181,500 for 2014. The highest paid feds on the Executive Schedule, such as agency heads and the vice president, will earn $201,700. Deputy heads will receive less than $200,000.

This pie chart breaks down the percentage of employees on each of the federal pay scales, according to the latest data from OPM: 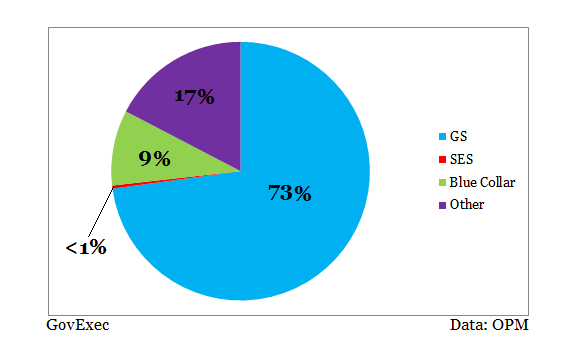 Many federal employees are able to boost their base salaries each year through bonuses.

Most bonuses are relatively small -- fewer than 1,000 feds received a five-figure pay bump, according to the database. Some top executives, however, were able to really cash in.

Sixteen federal employees received bonuses of more than $50,000. The highest award was nearly $63,000.

Some lawmakers want to ensure that certain federal employees do not receive such a pay bump.

A group of conservative lawmakers wrote a letter to House Appropriations Committee Chairman Hal Rogers, R-Ky., to cut off any funding for Internal Revenue Service workers involved in the political targeting of mostly conservative groups when conducting audits.

“The power to tax is the power to destroy, and these employees at the IRS committed a grave injustice to countless Americans,” the lawmakers wrote. “It sends the wrong message to the American people that Congress would allow these ‘performance awards’ to be doled out after the wrongdoing occurred.”

The IRS agreed in February to partially reinstate its bonus program after it had previously announced plans to cancel it.