OPM is planning to capitalize on the event’s success with more hiring initiatives. 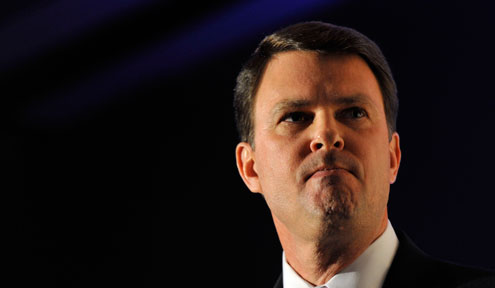 Thousands of job seekers and hiring managers swarmed the Veterans Affairs Department-sponsored career fair at the Washington Convention Center on Wednesday, an event the Office of Personnel Management promises will not be the last of its kind.

Veterans were looking for work among 6,400 public and private job opportunities, according to an estimate from VA. John Berry, director of OPM, was pleased with the event's outcome.

"Patriotism is alive and well in the United States of America, and the proof is in this room today," Berry said, estimating there were more than 2,500 job seekers in attendance and a 4-1 ratio of private-to-public sector representatives. Berry announced that he has been in talks with VA Secretary Eric Shinseki about putting on smaller scale fairs nationwide, hoping to build on the 4.5 percentage point increase in veterans hiring within the federal government during the past two years.

In addition, Berry said OPM has taken the step of ensuring each agency has an officer whose sole responsibility is dealing with veteran employment.

"Every agency now has a veteran service officer, full time, not partial duty. Because you know what part-time duty means; it means it don't get done," Berry said.

The line for career coaching, which he acknowledged had not been sufficiently staffed to meet greater-than-anticipated demand, snaked from the front to the back of the large ballroom, with many of the attendees seeking advice on resume building and interview conduct.

Veterans on both sides of the hiring process noted that, because of time spent inside the armed forces culture, the interview process often is the biggest hurdle to a new career.

"You don't have to worry about interviewing for jobs [in the military]. You're given a job and you're given training and you do that job," said Jennifer Bakale, a veteran working in management support with the Small Business Administration. One job seeker, Army veteran Rennie Davis, said it had been 22 years since his last interview.

Nearly every federal agency was represented at the fair. Private sector employers in attendance ranged from Lockheed Martin Corp. to Microsoft Corp. to Coca-Cola Co.

Jill Harrington, a surviving family member of a veteran who has done social work with military families for four years, attended the fair looking for a job with VA. Though she thought the event was "a good start," she noted that the one-day format and Washington location precluded some veterans and active military personnel from participating.

"The military can't always get off their jobs very easily," Harrington said, adding that she would have liked to see a virtual component to the event.

OPM came to the fair with 20 open positions that Berry said veterans could easily fill.

"If we can find them here today and they're qualified I would love to [hire them]," he said.