The National Academy of Public Administration launched its Grand Challenges initiative to tackle the most critical problems facing the nation.

We all rely on government programs. From defense to infrastructure to Social Security, our federal, state and local governments provide critical support for a thriving society. But for the past few decades, the United States has been in a state of near-constant change. The world has moved quickly from the Industrial Age to the Information Age, and this transition has led to a crisis in American governance.

As the rate of change outpaces the speed of governance, expectations for greater government services have increased, as have demands for lower taxes that are insufficient to fund those services. The public sector often finds itself in a reactive mode, struggling to adapt to a rapidly evolving international, economic, social, technological, and cultural environment, and our ability to govern well has faltered. It comes as no surprise that trust in government is at all-time lows, according to Gallup polls.

Over the next decade, as we grapple with seismic shifts in our world and the impact they will have on our citizens, it is imperative that government at all levels improve operations to tackle emerging problems in new and effective ways, as well as restore the public’s trust.

But where to start? We believe that the National Academy of Public Administration—an independent, non-profit and non-partisan organization chartered by Congress in 1984 to provide government leaders with expert advice on building more effective, efficient, accountable and transparent organizations—can and should play a key role.

To achieve the Academy’s vision for the future, we launched the “Grand Challenges in Public Administration” initiative in late 2018. This effort sought significant input from Academy fellows and the American public before a steering committee comprised of experts in diverse fields worked to identify the most significant challenges that the U.S. government will face in public administration during the 2020s.

At the Academy’s annual meeting this week, we are pleased to unveil the resulting 12 grand challenges in public administration, which fall within four major focus areas: protecting and advancing democracy; strengthening social and economic development; ensuring environmental sustainability; and managing technological changes.

Addressed individually, each of these 12 grand challenges will take years or even decades to solve. However, it is critical that we move forward on each of these challenges now, and simultaneously, to strengthen governance in the 21st Century. 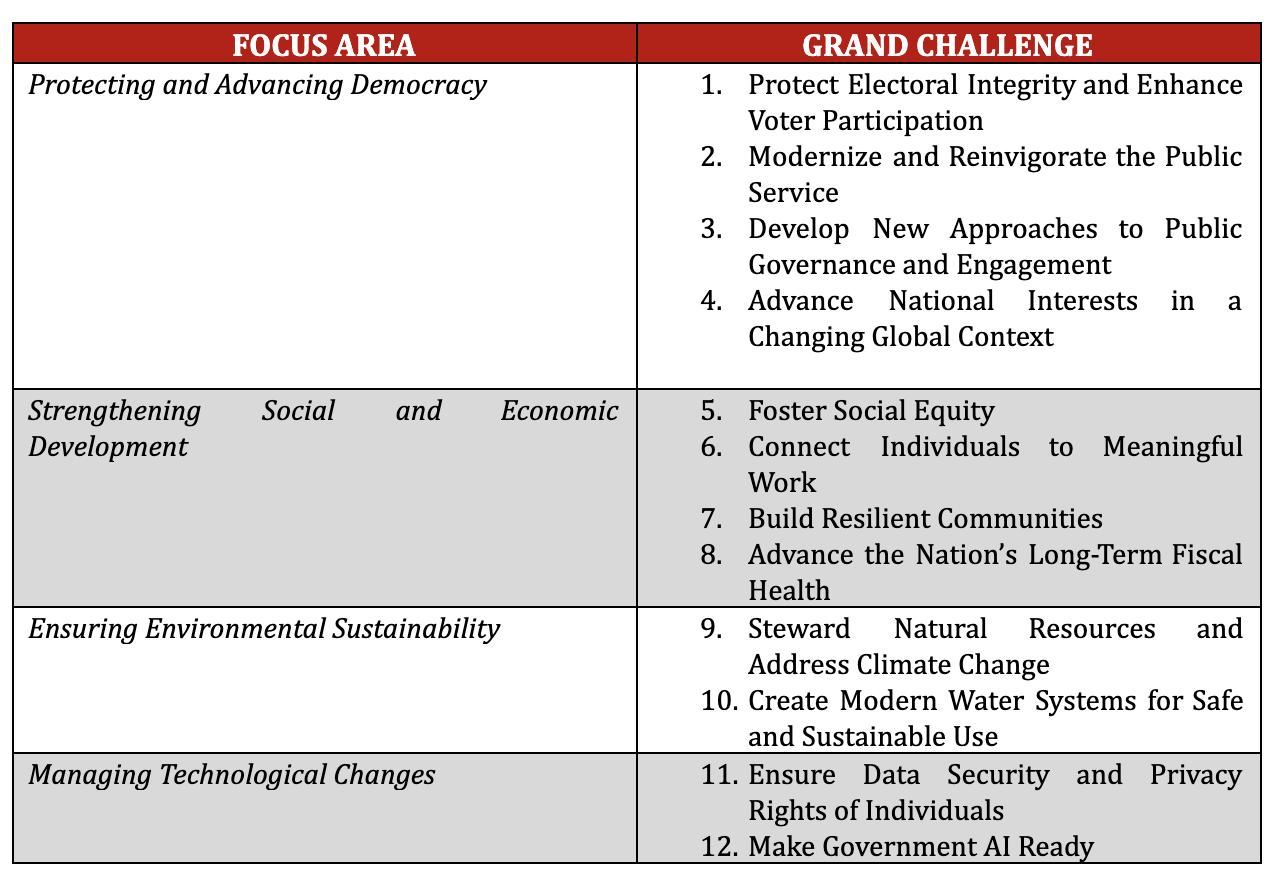 In today’s government, fierce partisanship and divisions often dominate the public discourse and obscure the opportunity to focus on possible solutions. Ideas abound but are frequently not translated into meaningful action, and so confidence in government continues to dwindle.

We believe that solutions that drive effective governance and problem-solving can only occur in collaborative ecosystems—in multi-stakeholder environments that incorporate ideas from the private sector and nonprofit organizations—developed to address seemingly intractable problems, guided and enacted by expert public administrators.

As such, public administration may be the most urgent and necessary set of skills imaginable. Public administration is critical to ensuring that the public sector has the expertise needed to address the most pressing civic problems facing society. Public administrators translate ideas into action, policies into laws, and laws into programs; allocate resources and account for results; and balance competing risks and opportunities to get the best outcomes for the most people.

The Grand Challenges are not the Academy’s alone—they are the most significant challenges facing our entire nation. Moving forward, the Academy will work with interested people and organizations at all levels of government, in universities, and in the private and nonprofit sectors so that, collectively, the nation can make real progress. Specifically, the Academy wants to inspire action, enhance understanding of each grand challenge, connect stakeholders, and drive change.

If we are successful in our Grand Challenges campaign, a decade from now, Americans will better understand and thus have a greater trust in their government because they participate actively in it, see government service as valuable, and are satisfied with its performance. Our communities will have resilient systems that ensure their residents are healthy, safe, and engaged in work that is meaningful and sustaining. Our natural resources will be managed effectively to meet current and future needs, and our management of digital data, privacy and technology will enhance our welfare.

The challenges we have identified are so far-reaching, so complex, and so grand that it is only through the collective and collaborative efforts of government, academia, nonprofit organizations, the private sector and the public that together, we can solve these challenges and leave a positive legacy for the next generation. We hope you’ll join us at www.napawash.org.

Terry Gerton is the President and CEO of the National Academy of Public Administration.