As the agency’s ability to audit the rich crumbles, its scrutiny of the poor has held steady in recent years. Meanwhile, a new study shows that audits of poor taxpayers make them far less likely to claim credits they might be entitled to.

Every year, the IRS, starved of funds after years of budget cuts, loses hundreds more agents to retirement. And every year, the news gets better for the rich — especially those prone to go bold on their taxes. According to data released by the IRS last week, millionaires in 2018 were about 80% less likely to be audited than they were in 2011.

But poor taxpayers continue to bear the brunt of the IRS’ remaining force. As we reported last year, Americans who receive the earned income tax credit, one of the country’s largest anti-poverty programs, are audited at a higher rate than all but the richest taxpayers. The new data shows that the trend has only grown stronger.

Audits of the rich continue to plunge while those of the poor hold steady, and the two audit rates are converging. Last year, the top 1% of taxpayers by income were audited at a rate of 1.56%. EITC recipients, who typically have annual income under $20,000, were audited at 1.41%. 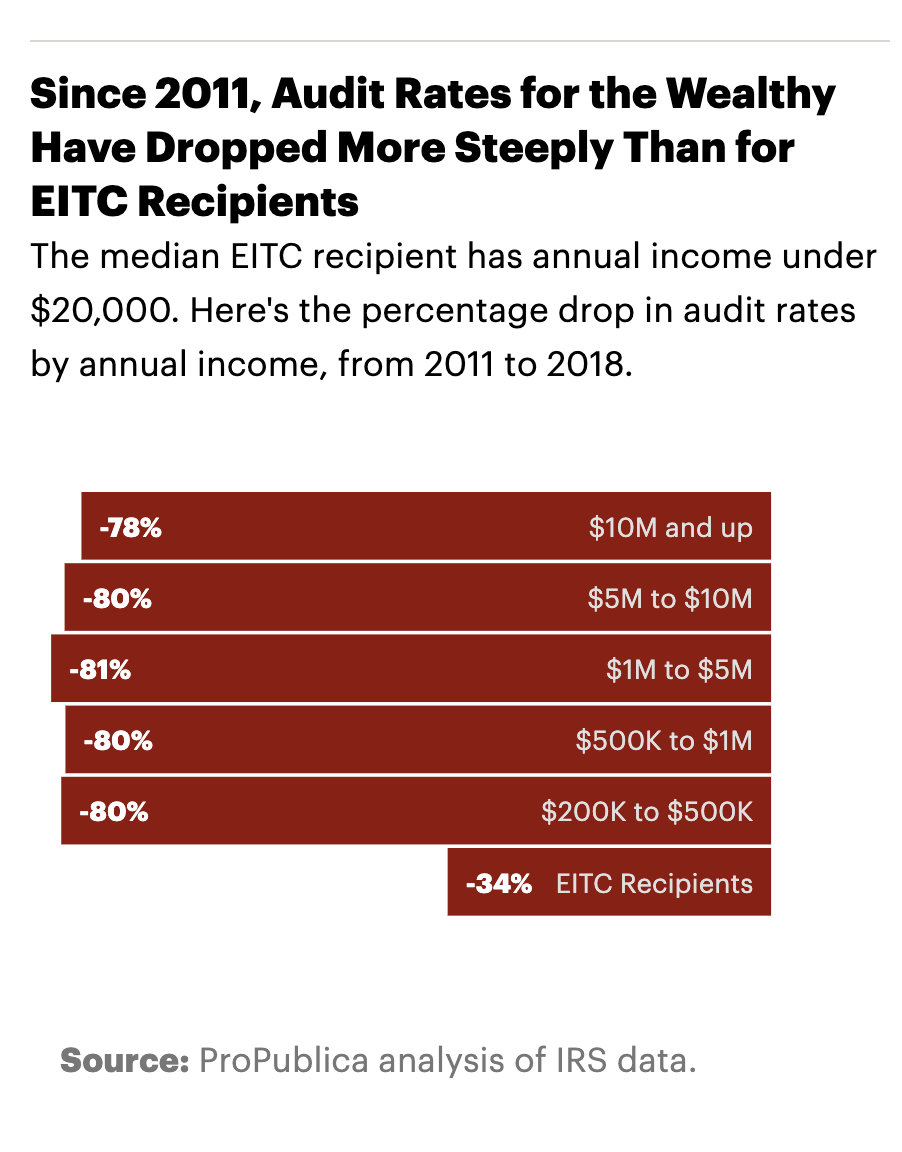 Part of the reason is ease. Audits of EITC recipients are largely automated and far less complicated.

“While the wealthy now have an open invitation to cheat, low-income taxpayers are receiving heightened scrutiny because they can be audited far more easily. All it takes is a letter instead of a team of investigators and lawyers,” said Sen. Ron Wyden, D-Ore., the ranking member of the Senate Finance Committee.

“We have two tax systems in this country,” he said, “and nothing illustrates that better than the IRS ignoring wealthy tax cheats while penalizing low-income workers over small mistakes.”

In a statement, IRS spokesman Dean Patterson acknowledged that the sharp decline in audits of the wealthy is due to the agency having lost so many skilled auditors. And he didn’t dispute that pursuing the poor is just easier.

Because EITC audits are largely conducted through the mail by lower-level employees from a central location, they are “less burdensome for taxpayers than in-person audits as they mail in their documentation and don’t have to take time out of the workday,” Patterson said.

“Correspondence audits are also the most efficient use of IRS’ limited examination resources.” 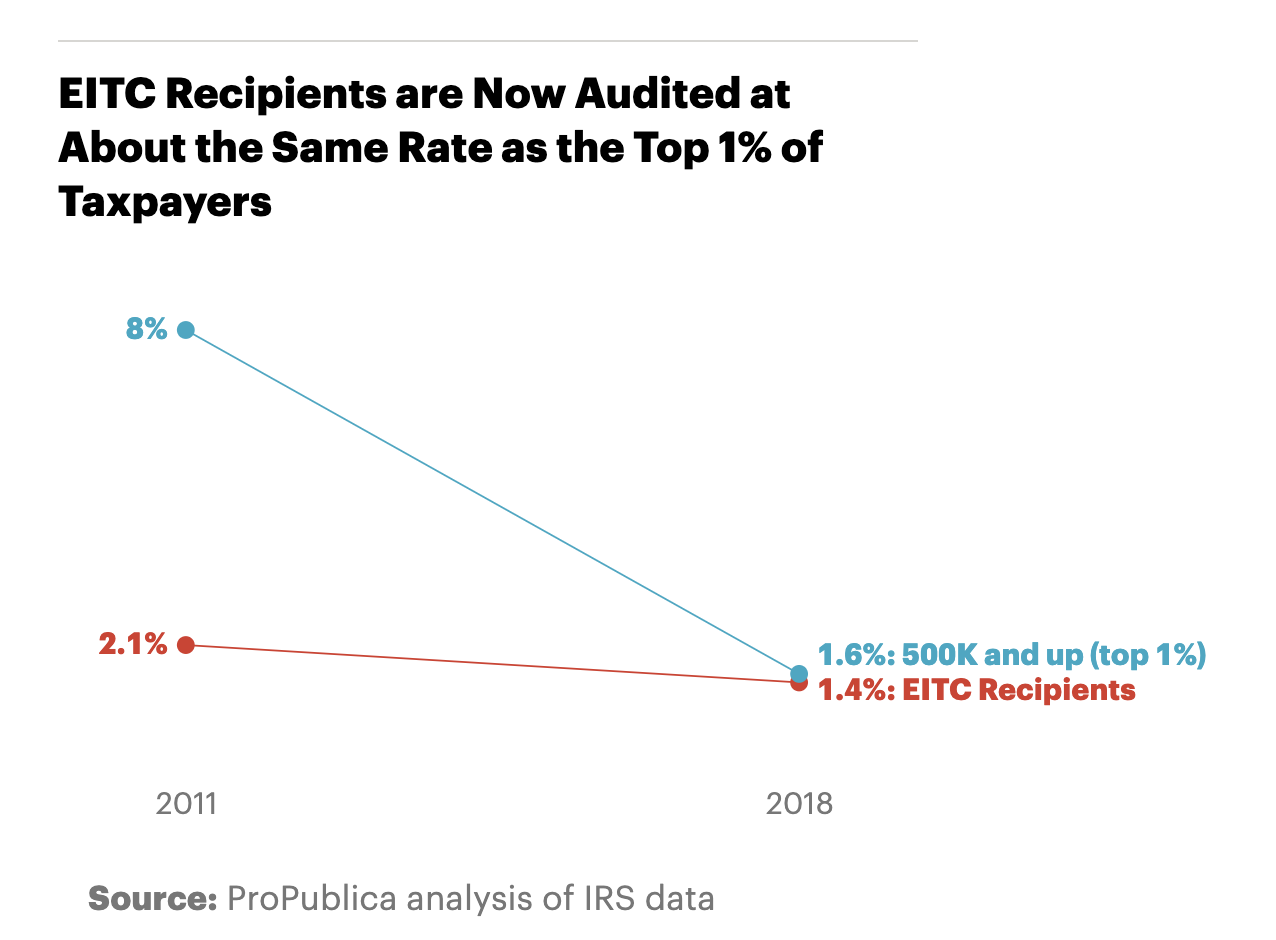 In April, Wyden, citing ProPublica’s reporting, asked IRS Commissioner Charles Rettig to deliver a plan to address the agency’s disproportionate focus on auditing the poor. The deadline has passed, but Wyden’s office said the senator still expects a response. The IRS did not comment on the delay.

The agency audited 382,000 recipients of the EITC in 2018, accounting for 43% of all audits of individuals last year. When we mapped the estimated audit rates for every county in America, the counties with the highest audit rates were poor, rural, mostly African American and in the South, a reflection of the high number of EITC claims there.

Natassia Smick and her husband were among those unlucky 382,000 households. We wrote about them last year. They live outside Los Angeles and saw their entire refund frozen in February 2018. For a couple who earned about $33,000 in 2017, that $7,300 refund was big money ($2,000 of it stemmed from the EITC). When it didn’t come, Smick said she had to abandon plans for catching up with her credit card debt.

After Smick sent in all her supporting documents, it took until this May to get a final answer from the IRS. Fourteen months after it all started, the IRS said it agreed Smick and her husband were due about $7,000, she said. But the agency disagreed on the remaining $350, because it couldn’t verify her husband’s employment for part of the year. Smick said the IRS was wrong to hold back the $350, but she couldn’t afford to contest it and further delay the $7,000.

“I’m not going to fight anymore,” she said. “We have already waited too long, and we are not in a financial position to wait another three months to appeal.”

A new study by academic and government researchers shows that there has been a big cost to these audits: They’ve discouraged hundreds of thousands of families who might qualify for the credit from claiming it in future years.

For poor taxpayers, the worst part of the EITC audits is usually the beginning. That’s because they almost always begin with the shock of the refund being held.

But the audits also hardly ever end well. According to data in the new study, most end without the taxpayer responding at all, and the poorer the audit target, the more likely that is to happen. Those with wage income under $10,000 per year, for instance, didn’t respond at all in 64% of the EITC audits. For those with income over $40,000 per year, that rate dipped to 35%.

The diminished response rate of the poorest taxpayers in part reflects that they are harder to reach: In 15% of those audits, the mail couldn’t be delivered. But earlier studies have also shown that many poor taxpayers don’t understand they are being audited or have trouble deciphering what the IRS is asking in its letters.

The EITC is aimed mainly at low-income workers with children. Last year, 26 million households received an average credit of about $2,500. Most EITC audits require taxpayers to dig up documents to show that a child meets the legal threshold of a “qualifying child,” a status that’s distinct from a dependent. The IRS has long blamed the law’s complexity as the main reason taxpayers may incorrectly claim the credit.

Smick was among the rare audit veterans who prevailed. Taxpayers rarely win against the IRS regardless of how likely they are to qualify for the credit, according to the new study, which was done by Day Manoli, an assistant professor of economics at the University of Texas at Austin, and researchers with the IRS and Treasury Department.

The authors sliced the population of EITC recipients into categories. At one end of the spectrum were tax returns with red flags that made it almost certain they would be audited. On the other end were returns very unlikely to be audited. But, looking over time, the outcomes of those audits weren’t all that different. When those returns with red flags were audited, the taxpayers prevailed 7% of the time. The taxpayers at the other end of the spectrum — the group seemingly most likely to qualify for the credit — only prevailed 10% of the time.

The audits have a long-term impact on the lives of those who go through them, the study found. In the years after they were audited, wage earners were 68% less likely to claim the credit compared with similar taxpayers who had not been audited. They were even 14% less likely to file taxes at all.

These taxpayers surrender “benefits from potentially legitimate EITC claims,” the study authors write, and, when they fail to file taxes at all, leave money on the table in the form of other credits and withholdings.

Because the IRS conducts so many EITC audits — between 380,000 and 600,000 per year over the past decade — at the very least, hundreds of thousands of taxpayers have likely avoided claiming the credit in response to having it denied through an audit. By discouraging people from claiming the credit, the audits clash with an avowed goal of the IRS: to encourage people to claim it. About a fifth of those eligible for the credit don’t claim it, and the IRS runs education campaigns to increase uptake.

EITC recipients are audited at such a high rate in part because Republicans in Congress have long pressured the IRS to reduce incorrect payments of the credit.

The IRS estimates that there was about $18 billion in incorrect claims in 2018. In most contexts, $18 billion is a big number, but when compared with the full scope of unpaid taxes, which likely total more than $600 billion each year, it’s not so big.

And while that $18 billion number, which Republicans touted as a “big problem” in the April hearing, is often cast as a kind of government waste, the study shows things are far more complicated.

The authors distinguish between the $18 billion in “gross overpayments” of the credit, which would include such misdirected payments, and what they call “net overpayments,” money that shouldn’t have been paid out at all. The “net” number, they say, could be one-third to one-half smaller than the “gross” one.

The IRS, in its statement, said the study had focused on a sample of only one type of taxpayer (single and head-of-household filers), and so the estimate of “net overpayments” should not be generalized to the entire EITC-claiming population.

This article was originally published in ProPublica. It has been republished under the Creative Commons license.  ProPublica is a Pulitzer Prize-winning investigative newsroom. Sign up for their newsletter.