Progress back on track after uptick last year.

The population of homeless veterans decreased by more than 5 percent in the last year, the Trump administration announced on Thursday, and has dropped nearly in half since 2010.

The number of homeless veterans had fallen for six consecutive years before ticking up slightly in 2017. The departments of Housing and Urban Development and Veterans Affairs have led an interagency effort to eradicate veterans homelessness since President Obama in 2010 announced a goal of ending the problem entirely within five years. There are now about 38,000 homeless veterans, according to the government’s count.

HUD Secretary Ben Carson pointed to the HUD-VA Supportive Housing Program as playing a key role in the progress, which combines HUD’s rental assistance offerings with VA’s case management and clinical services. More than 4,000 veterans experiencing chronic homelessness found permanent housing through the program in the last year, officials said. Carson explained the Trump administration is not putting a specific timeline in place to eradicate the problem entirely, saying instead the goal is to end it “as soon as possible.” 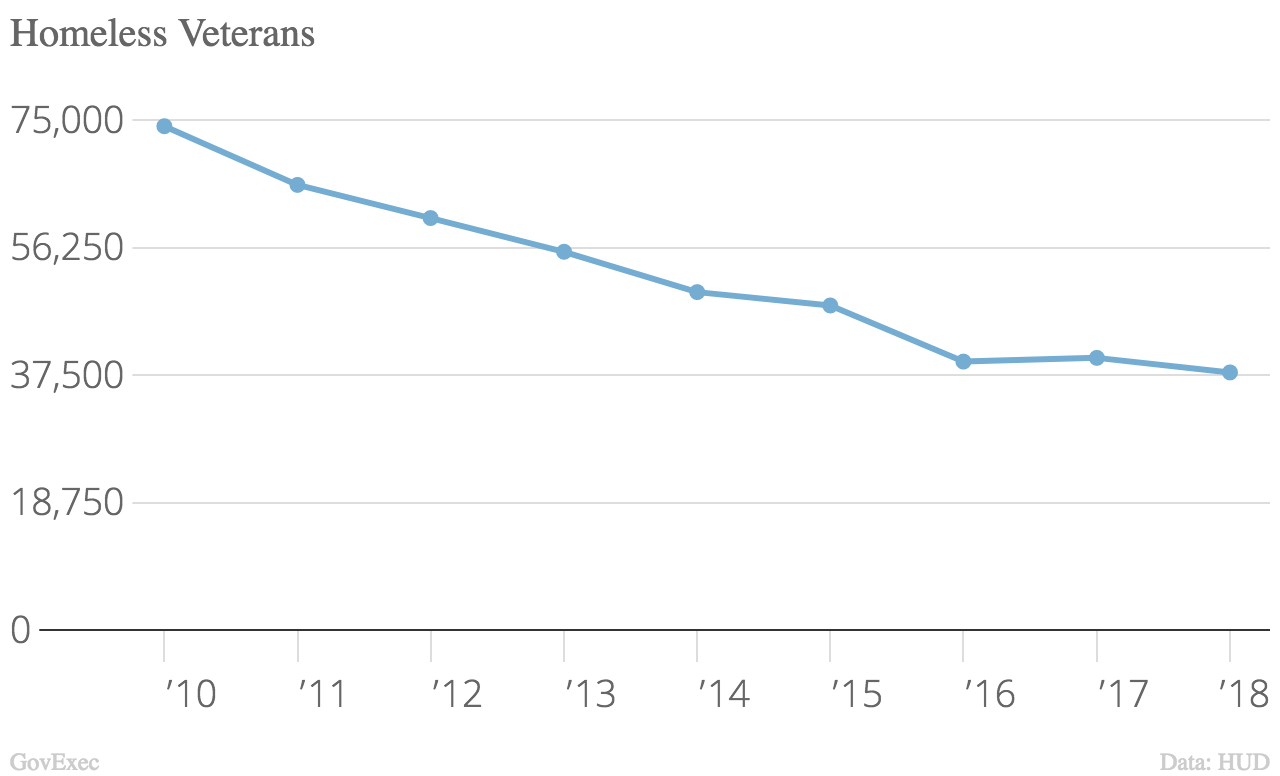 While the homeless veteran population has been cut in half, officials said the issue remains intractable because veterans have fallen out of the system.

“It’s a difficult problem because not every homeless veteran is coming to us and saying, ‘Please help me,’ ” Carson said. By focusing on offering not just a home or VA’s more extensive service, but both together, the secretary said the government can continue to make progress.

“Today we have a story that is getting better,” VA Secretary Robert Wilkie said. “It’s not good enough, but it is better.” He added VA has not yet identified all the veterans in need of help, as in many cases they have not been in contact with VA for more than a decade.

The VA secretary praised the work of state and local governments, as well as charities and other non-governmental organizations, in helping the federal government get back on track. He called the intergovernmental and nonprofit collaboration “the model ahead.”

“We focus instead on equipping communities to set their own goals and ambitious goals, really grounded in their realities and then doing everything we can at the federal level to support them to achieve those goals,” U.S. Interagency Council on Homelessness Executive Director Matthew Dougherty said.

Wilkie stressed the importance of tackling an array of issues that affect veterans—such as the opioid crisis and mental health care—in conjunction with homelessness, while recognizing the interplay among them. He added that funding from a measure President Trump signed into law last year to provide more veterans access to private sector care has helped direct resources to the “glaring needs” across the country.

Kathryn Monet, CEO of the National Coalition for Homeless Veterans, praised the administration for making progress, but noted the VA and HUD saw the biggest improvements when the issue was more of a top priority. Ending veteran homelessness was an agency priority goal for HUD under Obama,

“Evidence-based practices work to end veteran homelessness, and we recognize and applaud that this progress has been made in the face of an affordable housing crisis,” Monet said. “Any decrease is commendable, but senior leadership at VA can and must do more to encourage progress across the country.”

NEXT STORY: Answer These Questions To Understand If You’re a Good Manager