Average plain language grades for 23 agencies fell from B to C in new report card.

Despite innovative efforts by government wordsmiths and designers, agency grades in jargon-free communications dropped from a B average to a C last year, according to the 2018 report card released on Friday by the nonprofit Center for Plain Language.

One possible reason: high turnover during the past three years in the two key job slots at most agencies required by the 2010 Plain Writing Act, which mandates that agencies take concrete staffing and training steps to make writing clear, concise and well-organized.

"Here’s something all Americans can agree on—government webpages should be clear and easy to use," said Rep. Dave Loebsack, D-Iowa, a college professor who champions the act. “That’s why I’m troubled that so many agency webpages are still laden with jargon and acronyms and focused more on themselves than the everyday people who need government services, data and help.”

Standout agencies that earned A grades in both writing quality and organizational compliance included the Agriculture Department, the Small Business Administration and the Social Security Administration. High grades for graphic presentation were acknowledged specifically for the Defense Department’s TRICARE website, Social Security’s My Account page and USDA’s Choose My Plate page.

The link to turnover—13 of 23 agencies have replaced people in both the required senior-level official and point of contact jobs—is tentative. “It could be due to turnover, but I’m not trying to blame any particular administration,” Loebsack said in a Friday call with reporters. “Individual citizens trying to deal with agencies shouldn’t suffer from a changeover in administrations.”

David Lipscomb, who led research for the grading at the Richmond, Va.-based center, declined to link the turnover to specific agencies where President Trump and his team have left open a high number of vacancies. But he said his team found 75 percent turnover in the two plain-language-related jobs at each of 23 agencies. “From 2015-2018, only 10 people are still in the positions they occupied in 2015,” he told reporters. (The report tracks the turnover agency by agency). “In 13 agencies there was complete turnover, and in nine of those 13, the grades declined,” he said. At the agencies whose grades were stable or improved, “all had retained at least one of the specialized jobs.”

The chief problem, Lipscomb added, is that too many agencies ignored a plain language principle of focusing on the audience. “On too many homepages, self-promotional news crowded out tasks and information for users, while jargon and acronyms stayed entrenched,” he said.

Loebsack cited as a good next step passage of a bill on simplifying regulations that he introduced with Reps. Seth Moulton, D-Mass., and Mark Meadows, R-N.C., acknowledging that these are unlikely bedfellows. The Too Long; Didn’t Read Act (H.R. 5321)  would require the Office of Management and Budget to develop and issue regulations that direct each federal agency to provide a clearly-marked section at the top of a communication (both hard copy and electronic) that the agency sends to an individual if such communication requires or authorizes the individual to take action.

To see agencies' grades on this year's plain language report card, view the chart below: 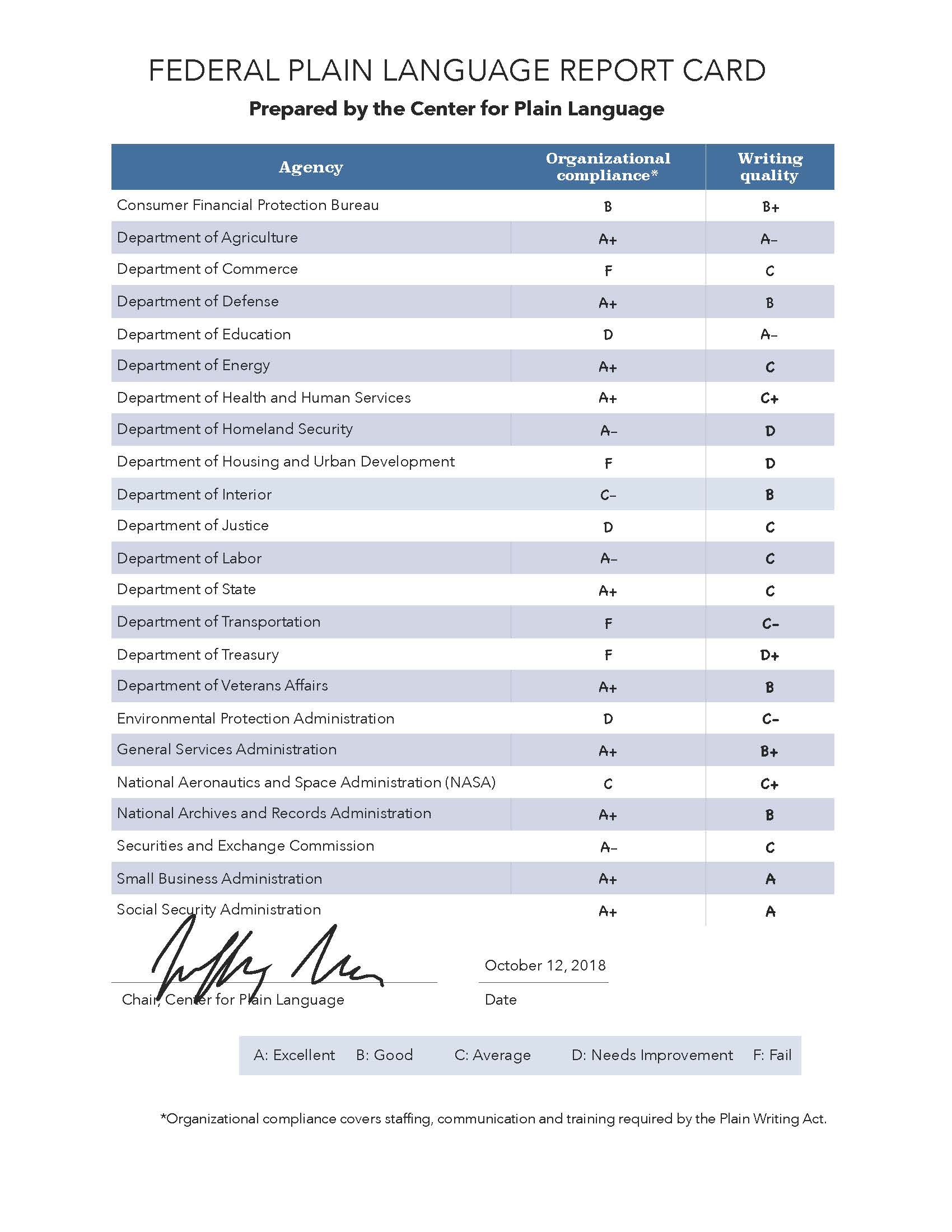