Donald J. Trump accelerated toward his electoral victory two years ago with the support of conservatives who favored a combination of major reform in how government works and a smaller government delivering fewer services. These dismantlers, as I call them, dominated the campaign discourse with a 43 percent share of public support.

But even as the dismantlers won the White House, they faced a rising tide of moderates and liberals who, while also favoring major reform, wanted a bigger government delivering more services. These rebuilders held only a 25 percent share of public support in 2016, but showed signs of growing strength dating back to the 2010 midterm election when the Tea Party uprising received the greater coverage.

Two years later, the distance between the two reform positions has narrowed sharply. Between August 2016 and June 2018, the number of dismantlers dropped from 43 percent to 35 percent, while the number of rebuilders rose from 25 percent to 31 percent. If these trends hold, the rebuilders will top the dismantlers by November and could be well on their way to choosing the next president in 2020. 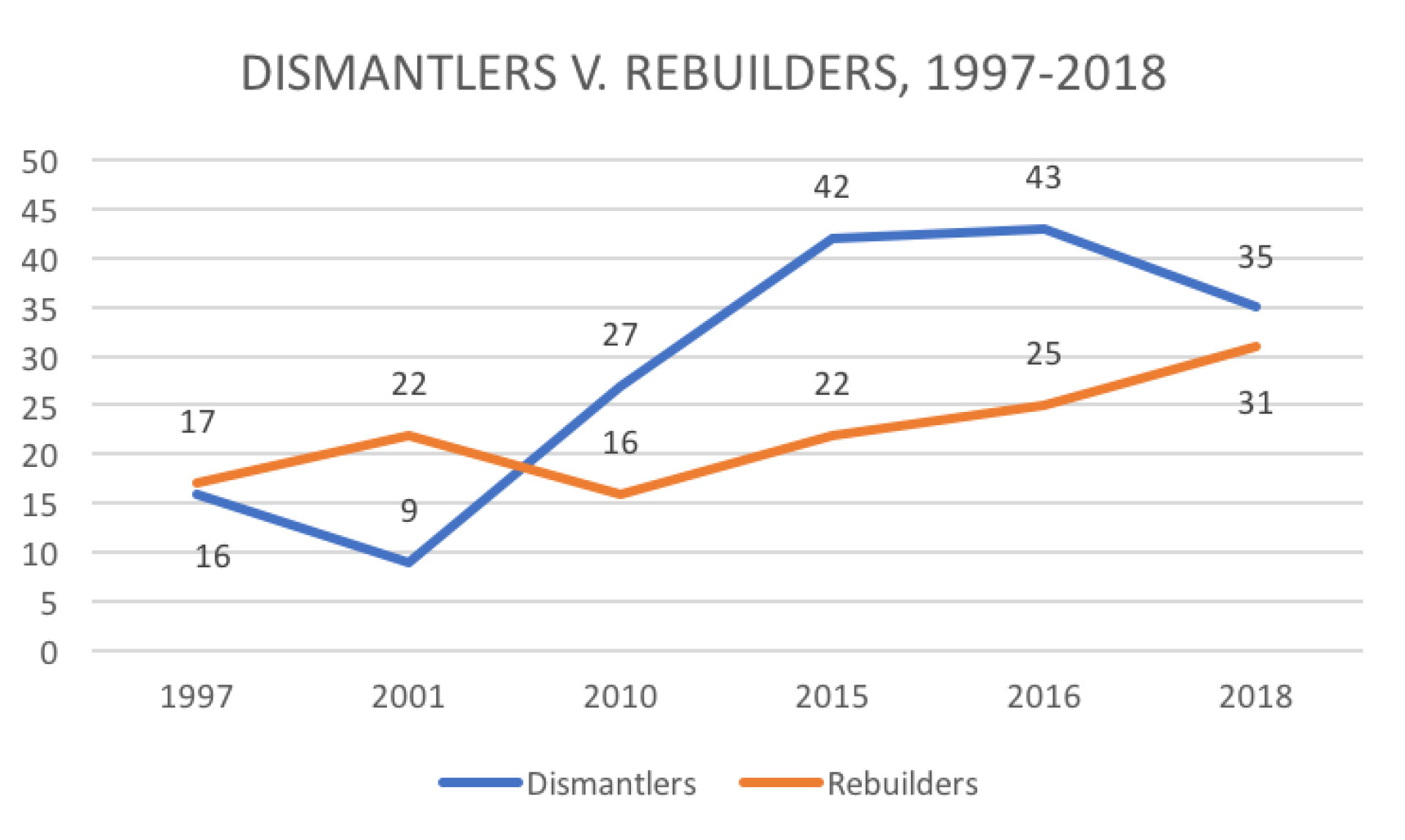 Why the Dismantlers Left

This shift did not reflect rising trust in government or a sense that government was improving. Indeed, the number of Americans who said the federal government needed major reform inched up from 56 percent in 2016 to 60 percent last June. Nor is it likely that one-fifth of the dismantlers suddenly decided that they wanted a bigger government now that Trump was in charge.

Rather, the shift appears to reflect Trump’s own failure to deliver on the government reforms he promised.

Second, Trump did not deliver on smaller government. The national debt is soaring, the defense budget just notched record high growth despite Trump’s 2015 campaign promise to rebuild the military for less, and he has yet to open a bipartisan conversation on saving Social Security and Medicare as the trust funds wane. Trump also promised to “cut so much, it will make your heads spin,” but the cuts never happened.

Third, Trump also failed to take on a rigged system that only he alone could fix it. His promise to “drain the swamp” centered on his anti-government base, but also appealed to the moderates and even occasional liberals, who expected him to tackle ethics reform, insider politics, and influence-peddling. He claimed he had no patience for injustice, no tolerance for government incompetence, and no sympathy for leaders who fail their citizens. But he has yet to mount a reform agenda of even modest designs.

Even Trump seems to believe that he has failed to drain the swamp. How else to explain his own tweets about deep state conspiracies, the congressional resistance, and bloated bureaucracy? The dismantlers believed Trump when he promised to reorganize government, but even he derided his plan last June by asking reporters whether it just might be “extraordinarily boring and therefore not fit for camera.”

Last month’s convictions of Trump’s personal attorney and campaign chairman are certain to drive even more dismantlers to reconsider their support. Trump will continue preaching to very conservative crowds at his raucous rallies, but will still be losing ground among his moderate supporters, many of whom have never donned a MAGA hat, let alone own one.

The rebuilders will need more than an inventory of Trump failures to secure a plurality this fall, however. They also need candidates who embrace the need for major reform. There are plenty of candidates today calling for new programs such as Medicare for all and guaranteed jobs, but few who have much to say about making government work beyond abolishing Immigration and Customs Enforcement (without offering details on what might replace it).

Much as the rebuilders might support these progressive policies, they also worry about government performance. Indeed, they are just as likely as the dismantlers to say that government is wasteful and inefficient. Like the dismantlers, the rebuilders worry that most elected officials do not care about people like them, and believe their side lately has been losing more than winning.

A Message That Resonates

The nation has seen glimpses of intense distrust in many presidential campaigns, but Jimmy Carter was the most effective in putting rebuilding at the core of his campaign. He made plenty of progressive promises for national health care, jobs, and welfare reform, but he also made a clear commitment to upholding ethics, curbing the influence of lobbyists, reforming the civil service system, and reorganizing government from the top down.

Carter also put ethical conduct at the center of his campaign. He promised to honor “the majesty of the Constitution,” “lead without negativism,” and tear down the wall that separated government from the people. The last five minutes of Carter’s 1976 acceptance speech should be required listening for any rebuilder. Even though he was driven from the presidency in 1980 by economic misery and the Iran hostage crisis, Carter proved that a rebuilding agenda can produce electoral success. The only thing missing at this point is a candidate who sees the potential.

In the meantime, Trump continues to press for dismantling across the federal hierarchy. Although Trump recently signed legislation that may help departments and agencies accelerate the hiring process, the reforms are best viewed as a first step toward long-overdue reform, and a small step at that.

Federal employees have watched the two tides of reform wash ashore in government for decades, and have more than enough experience to know that deep personnel cuts at disfavored agencies, revocations of top-secret clearances, fuzzy promises to “reskill” the workforce and eliminate “low-value work,” and enduring vacancies in key management posts are signs of dismantling.

Senior Trump officials often counter the signs with soaring rhetoric about the government’s “untold number of selfless civil servants” and genuine assurances that they do not “distain” the federal workforce. However, even good-government advocates such as OMB’s Margaret Weichert and OPM’s Jeffrey Pon still work for a dismantler-in-chief who embraces deep-state conspiracies, rarely misses a chance to attack the bloated federal bureaucracy (“and I mean bloated”), targets his political enemies, and is waging a petulant, and at least for now failing, war against federal employee unions.

If Trump is serious about surrounding himself with the best and most serious people, he would also do well to spend more time listening to federal employees and less time tweeting about their conspiracies. They were already on the job when he moved into office and remain committed to their constitutional obligation to execute the laws faithfully. What they will not and must not do is unravel laws that a president and party impugn but cannot change. There is a place to work out the disagreement, and it is at the other end of Pennsylvania Avenue.

Paul C. Light is a professor of public service at New York University, a nonresident senior fellow at the Volcker Alliance, and an award-winning author. His latest book, The Government-Industrial Complex will be published in December by Oxford University Press.