Former secretary of State’s favorability has improved significantly, while Trump’s has worsened.

Hillary Clinton has dramatically increased her lead over Donald Trump among the federal workforce, according to a new poll, with 53 percent of respondents saying they would vote for the Democratic presidential nominee compared to just 34 percent for her opponent.

The Government Business Council/GovExec.com survey shows Clinton’s lead has expanded from the five-point margin she held in July. For the first time in any GBC poll of federal employees this election cycle dating back to August 2015, Clinton’s favorability was not under water. 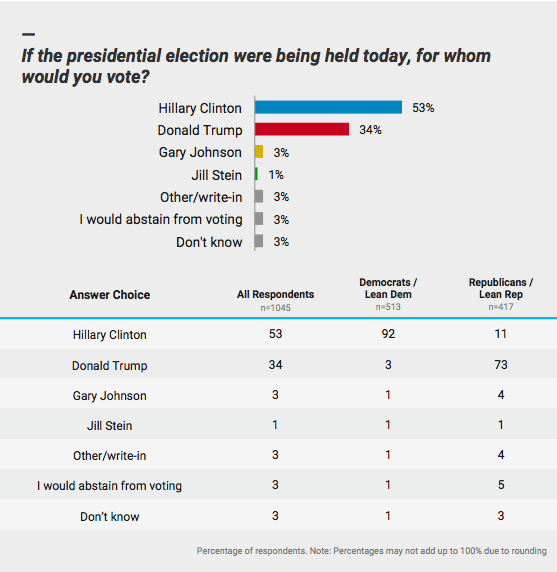 President Obama held a higher favorability rating than anyone on the ballot, with 57 percent of feds approving of their top boss and 43 percent disapproving. Sen. Tim Kaine, D-Va., Clinton’s running mate, was also significantly above water, with 46 percent of federal employees viewing him positively and 36 percent negatively. The scores for Trump’s vice presidential nominee, Gov. Mike Pence, R-Ind., were slightly negative, with a 42-45 percent split. 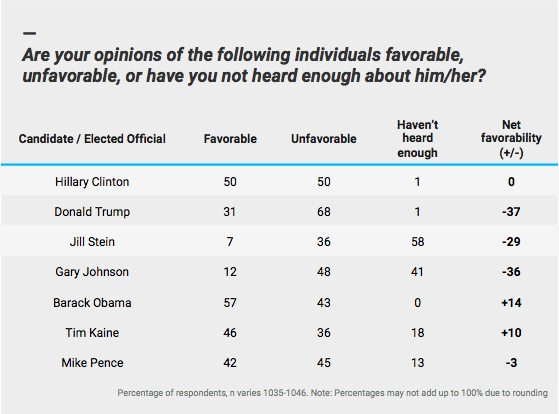 Clinton’s supporters were also much more enthusiastic about her candidacy. Nearly six in 10 backers of the Democratic nominee said they “fully support her as a candidate,” while the rest said she was simply the better option over Trump. Just 38 percent of Trump supporters said they fully backed their choice, while 62 percent said he was a superior alternative to Clinton.

Feds appear to appreciate Clinton’s time in government; 65 percent of her supporters named the former State Department secretary’s public service experience as the most appealing aspect of her candidacy, while 29 percent chose her policy positions. About half of Trump fans said they were most attracted to his policy positions, while 37 percent said it was his business experience.

Government Business Council released the survey on October 13, 2016, to a random sample of Government Executive, Nextgov, Defense One, and Route Fifty subscribers. At least 1,085 federal employees participated in the survey, including 581 at the GS/GM-13 and above grade levels and 31 members of the Senior Executive Service. Respondents included representatives from at least 35 federal and defense agencies. The poll has a margin of error of plus or minus 3 percentage points.

See the full results of the survey here.

NEXT STORY: That Focusing Trick Good Leaders Use To Stay On Task