Management
Change It Up This Week

Routines are important, but not when they get in the way of creativity.

If you’ve been reading anything I’ve written over the past few years, you know what a big fan I am of routines. I’m especially fond of the routines—physical, mental, relational and spiritual—that help you show up at your best. Mindful routines help us groove the behaviors that lead to incremental improvement. Incremental improvement consistently achieved leads to big results. So, yay for routines! That said, every so often it’s important to change it up.

Here’s a simple example from yesterday, the Sunday after the 4th of July. My anniversary present from Diane was two tickets to a Dodgers game. We had a great time even though the Dodgers were shellacked by the Mets. As we were getting ready to drive home after the game, Google Maps wasn’t kicking in on the smartphone. Instead of continuing to futz with it, I said, “Let’s just drive West on Sunset Boulevard. We’ll get home eventually.” 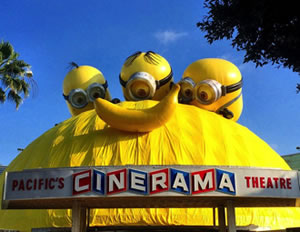 So that’s what we did, and just past Sunset and Vine saw the minions attacking the theater where their movie is playing. Diane is crazy for minions, and there were some interesting restaurants around so we parked the car, got out and started exploring. An hour or so later we had dinner at Blue C Sushi ($3 a plate happy hour pricing got us out of there for $24—a record low for dinner out in LA) and Diane got a picture of herself in front of the minions (which she has made me promise not to share here).

So, a simple little example of changing it up. It reminds me a lot of (and was probably inspired by) the stories my friend Per Wingerup shared with me when I interviewed him for Overworked and Overwhelmed. Per has a lifelong history of changing things up. That can be as ambitious as taking a year off to travel the world with his wife and daughters. It can be as simple as a smartphone-free exploration of a new town with one of his daughters as they walk to see her sister perform in a dance competition. Professionally, it looks like walking a different route every day from his hotel to his office when he’s away from home or scheduling as many meetings and conversations as possible away from the office or during a walk.

Routines are awesome but if they’re all you do, you can miss a lot that can spark creative insight, energize you or see things that you might have been overlooking. When routines become more mindless than mindful, that’s a good sign that’s it time to change things up.

Inside or outside of work, what are some simple things you could do to change it up this week?