Management
The Typical Millennial Is $2,000 Poorer Than His Parents at This Age

More young people are living in poverty and fewer have jobs compared their parents' generation, the Baby Boomers, in 1980.

By Derek Thompson
The Atlantic

The past is another country. In 1980, the typical young worker in Detroit or Flint, Michigan, earned more than his counterpart in San Francisco or San Jose. The states with the highest median income were Michigan, Wyoming, and Alaska. Nearly 80 percent of the Boomer generation, which at the time was between 18 and 35, was white, compared to 57 percent today.

Three decades later, in 2013, the picture of young people—yes, Millennials— is a violently shaken kaleidoscope, and not all the pieces are falling into a better place. Michigan's median income for under-35 workers has fallen by 26 percent, more than any state. In fact, beyond the east coast, earnings for young workers fell in every state but Hawaii and South Dakota.

How Young Adult Earnings Compared to 1980 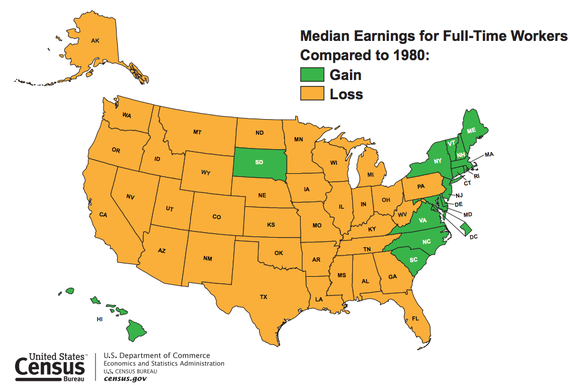 The median income of young adults today is $2,000 less today than their parents in 1980, adjusted for inflation. The earnings drop has been particularly steep in the rust belt and across the northwest.

Millennials Falling Behind Their Parents (Except in the East)

The Census, which offered some of these findings on Friday , tells an occasionally contradictory story of the youngest generation in the workforce. For example, how does one make sense of the fact that Millennials are more educated and more impoverished than its parents' generation at a similar age? Surely, some of this is a matter of timing. The Census figures from 2009 through 2013 survey a generation struggling their way out of a historic recession.

The deeper explanation might be structural. Many young adults, particularly those who represent their families' first college graduates, are earning more than their parents. But young adults without a college degree have been run roughshod by technological changes, globalization, and slow wage growth that continues to this very week . Many of the cities with the largest declines in median income (Flint, Detroit, Cleveland, Youngstown, Toledo) were industrial hubs undone by the demise of manufacturing employment.

It's also worth pointing out that the United States has absorbed millions of immigrants over the past 30 years, often from poorer Latin and South American countries. (The Census notes that the share of ethnic minorities has doubled over the last 33 years.) It's possible that, even as these young families have raised their own living standards by moving to the U.S. and contributed to a growth economy, their below-average wages, when lumped into the aggregate, make it look like native-born families' wage growth is worse than it really is.

Although these figures paint a lugubrious picture of young workers today, it's nonetheless true that Boston, San Jose, Washington, San Francisco, and New York's metro areas have all seen double-digit real income growth since 1980. The coasts (and, more recently, energy-rich states like Texas) have largely thrived. Indeed, the United States is a plural noun, and the country's health is most accurately captured as a mosaic rather than a monolith. An unequal decade punctuated by an unequal recovery has left parts of the country better off in just about every way, while the vast majority of states are home to a Millennial generation that is quite clearly falling behind the pace of its parents.