Management
For Thanksgiving, Why Does the President Only Pardon White Turkeys?

Notable heritage breeds don't make it to 1600 Pennsylvania Ave., thanks to the industrial turkey farming lobby's lock on the annual event.

By Garance Franke-Ruta
The Atlantic

When I was very young I lived in a big house in a small city in a rather rural, impoverished part of Southern Mexico . The house had a substantial flower and vegetable garden and, for a while, a turkey I'd sometimes find somewhere between the patch of sunflowers and the lettuce. Most of the food we ate came from the garden and the market stalls in town and the nearby holdings of Don Gustavo, who milked his cows into a bucket and left it to us to pasteurize on our own. But one of my earliest memories is of the turkey hen who lived in the garden, and the day she flew onto the red-tiled roof of the house and wouldn't come down.

Yes, turkeys are meant to fly .

We think of turkeys as a quintessential North American bird, but like corn they were first domesticated by the indigenous inhabitants of Central and Southern Mexico and Guatemala . Early Spanish explorers brought turkeys back across the Atlantic to Europe, and when the Pilgrims set sail for the new world they brought coops worth of the domesticated Mexican fowl with them from England. It was an accident of history they landed on territory where "ther was great store of wild Turkies," as Gov. William Bradford put it in 1621. Known for a time as the "forest turkey," today we call the type of bird the Pilgrims found the Eastern Wild Turkey .

I think about the first turkey I encountered -- yes, we eventually ate her -- whenever I see the annual turkey pardon at the White House. The sad, flightless, white-feathered American birds held down by men in suits amid the trimmed hedges of the Rose Garden look nothing like the creatures I recall being sold in markets in Mexico. And they bear only a passing resemblance to turkeys in the traditional Thanksgiving illustrations that we all know so well here in the United States. 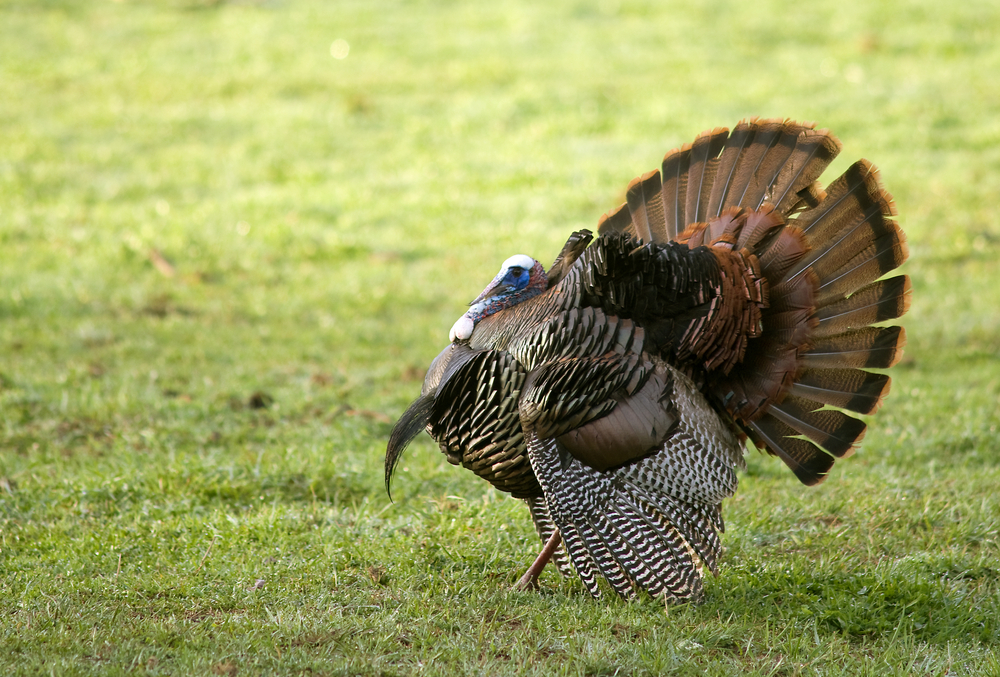 Above is your iconic North American wild turkey tom, the type of bird you and I drew in elementary school along with men and women in black, buckled shoes. Below, a turkey pardoned in 2009 by President Obama: 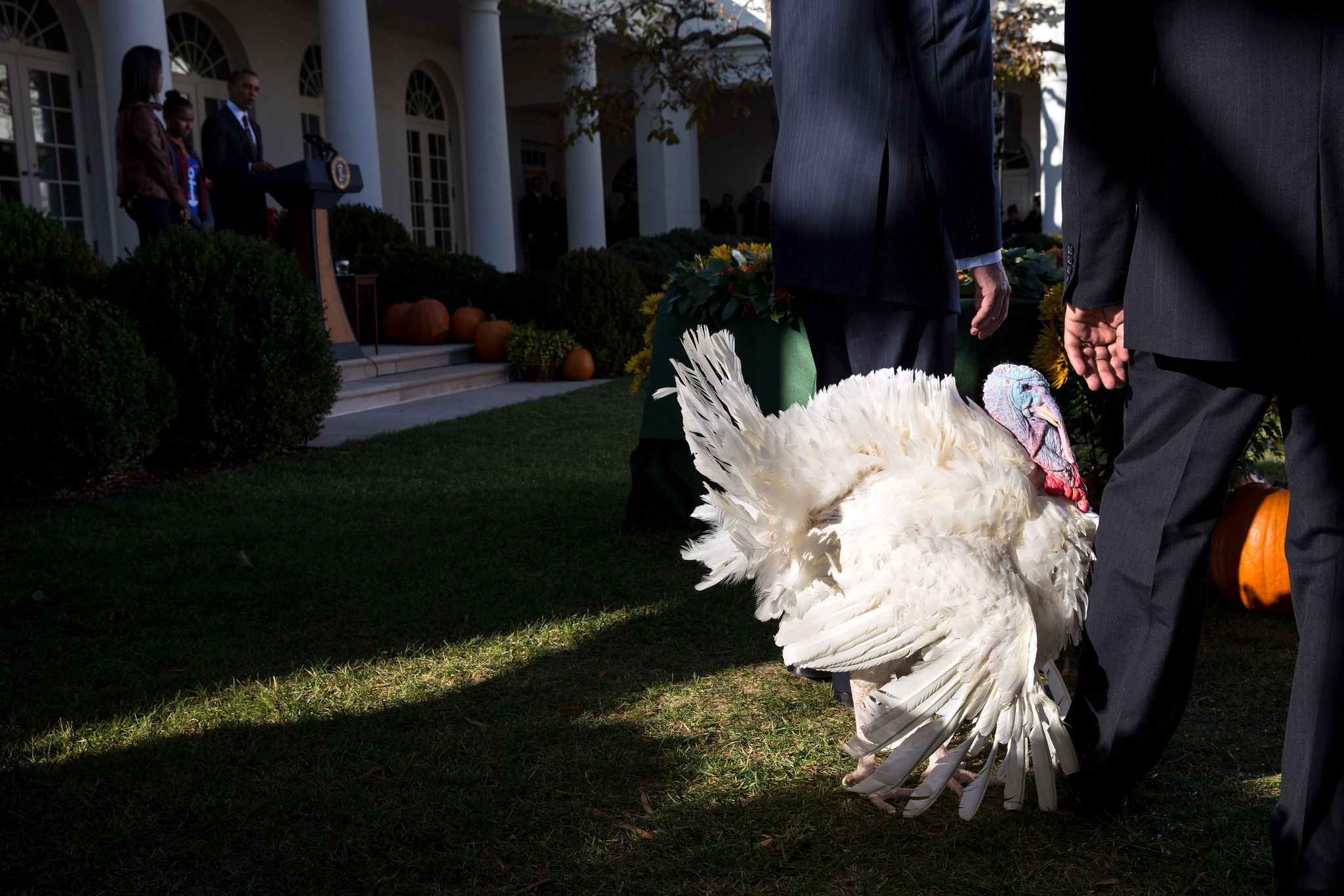 Unless you have gone out of your way to order and buy a heritage bird, this is the type of turkey you just ate on Thanksgiving: a Broad Breasted White . It is the only turkey breed still widely raised for the market, and it is a troubled creature. Wild turkeys have feathers colored iridescent red, green, copper, and bronze -- colors memorialized in crayon and tempera-paint images on the walls of every elementary school in America each fall. Heritage breeds like the Jersey Buff , the Narragansett , and the Bourbon Red grow feathers in an array of striking patterns and can range from tawny to black. All those shades have been bred away by the turkey industry, because feather buds (the pin feathers) are less noticeable under the skin of a plucked bird if they are white. With short legs and wide breasts -- the better to serve up white meat -- Broad Breasted White turkeys do not fly and can't even reproduce on their own.

After years of selective breeding, only one breed of turkey, the aptly named Broadbreasted White, remains in large-scale production in the United States. For about 30 years, it has been the breeding stock owned by the three major companies, Hybrid Turkeys of Ontario, Canada; British United Turkeys of America in Lewisburg, W. Va.; and Nicholas Turkey Breeding Farms, Sonoma, Calif. A blowzy specimen with short stubby legs, its disproportionate supply of white meat has come at the expense of taste and texture. It's stupid to boot.

The joke about turkeys drowning in the rain may actually have some basis in fact. Glenn Drowns, secretary-treasurer of the Society for the Preservation of Poultry Antiquities, and owner of the Sand Hill Preservation Center in Calamus, Iowa, a preservation farm, is infuriated by the degradation of the turkey. ''The commercial guys say they have to keep the turkeys in buildings because they'd drown in the rain,'' he said. ''It makes my blood pressure boil. Next year I'm going to raise some of them to see if they are that far gone.''

Because most Americans aren't old enough to have eaten the old-fashioned turkey, they have no idea what they are missing. The rest of us just forgot over the years, lulled into thinking that new is improved. Tasting the four heritage turkeys against two Broadbreasted Whites, one of which was free range, reminded me why the Thanksgiving turkey was so eagerly looked forward to 50 years ago, and why, today, cooks have had to dream up dozens of ways of making it taste better.

The common ancestor for all heritage breeds is the wild turkey, native to these shores. Wild turkeys went from Central America to Europe with the first explorers. Then they were imported to North America by English settlers as the black Spanish turkey, which was bred with the wild North American turkey. The Standard Bronze was the result and the other breeds followed: the Narragansett from Narragansett Bay in Rhode Island; the Bourbon from Bourbon County, Ky., and the Jersey Buff from New Jersey.

Fifty years ago, when Americans were still eating turkeys raised nearby, there were millions of those birds....

Today, their flocks number in the thousands.

The White House pardons white turkeys because that's what the National Turkey Federation sends over. A nonprofit, NTF is "the national advocate for all segments of the turkey industry"; its president was registered as a lobbyist in 2012. It began sending the White House a turkey each year before Thanksgiving during the Truman administration. Presidents ultimately chose not to eat their gift, though the "pardoning" of the bird only formally began in 1989, during the administration of George H.W. Bush. (See also "The Definitive History of the Presidential Turkey Pardon," courtesy of the White House .) Since then all the pardoned turkeys have been white, according to the photographic record.

"We just pardon who they send us," an administration official explained.

The NTF sends the White House the only breed their members raise. "The turkeys that are pardoned and the ones that are raised for consumption are almost exclusively white breasted. That is the breed that growers have found have the most white meat, which is what Americans prefer," said Kimmon Williams, a spokesperson for the National Turkey Federation.

"True wild turkeys aren't grown too much for consumption because they are a smaller bird," she added. "None of our members produce wild turkeys and I'm not entirely sure what companies do."

Heritage birds are represented by a different group, the Heritage Turkey Foundation , while wild birds find advocates at the National Wild Turkey Federation , which works with sportsmen on conservation issues. (Apparently "Turkey hunting is the hand-knit doily of the hunting genres. Arcane, involved, complex, and to outsiders, never worth the trouble," according to a recent article in Garden and Gun . Who knew.) The American Livestock Breeds Conservancy works to preserve heritage turkey breeds, as does the Society for the Preservation of Poultry Antiquities .

Some think the goofy Washington tradition of the president pardoning a turkey has passed its prime . "Of all the indignities a president must endure, officiating at the annual turkey pardon is perhaps the most unbecoming," wrote Joe Heim midweek in the Washington Post , calling the practice "unforgivably silly" and something "no president should intentionally subject himself -- or the country -- to."

But like so many other practices Washington interest groups have managed to get the government to sign on to, it seems unlikely the president will be able to get rid of the turkey receiving and pardoning ceremony without a minor uproar. Besides, people love silly White House traditions precisely because they are so incongruous, providing light-hearted photos of the most powerful man in the world.

Given the Obamas' concern with food sourcing and healthy eating, though, it might be time to diversify the turkey-pardon pool. Some of those heritage breeds are gorgeous birds, and the cause of preserving them is certainly as worthwhile as the annual event with Big Turkey's trade association. Heck, it might even make for a better photo. At the very least, it would turn an annual bit of White House silliness in an opportunity to raise awareness about a tiny sliver of American agricultural heritage, and provoke thinking about its future.

NEXT STORY: Stop Failing and Start Learning: Are You Rapid Prototyping Your Ideas?