Listen to the story:

To learn more about how technology is changing the way government interacts with citizens, register for free to attend NextGov Prime Nov. 20 – 21 in Washington, DC.

On Aug. 6, 2012 a robot that had for months been quietly hurtling through space blasted out a triumphant communiqué: 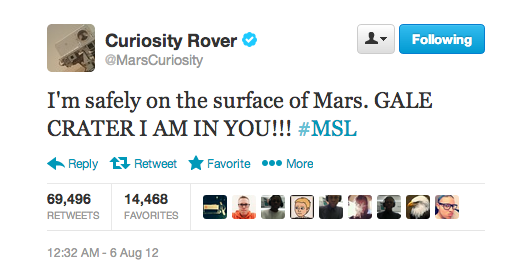 The message, which followed the now famous “ Seven Minutes of Terror ,” was quickly retweeted nearly 70,000 times. Of course the message didn’t come from the robot itself, it came from the social media team at NASA’s Jet Propulsion Laboratory manning its Twitter account. Not only did the tweet announce that Mars Curiosity had arrived on Mars—it announced NASA’s stature as the model for how government can engage citizens through social media.

Social media’s story is now an old one. Platforms like Facebook, Twitter and YouTube have changed the game, altering the way people share information and interact with brands. The press release, once the gold standard for getting your message out, is now antiquated—as is the notion of the “press” to whom that information is released. Organizations that had once relied on media outlets to tell their stories are now themselves the media outlet, taking their message straight to their target audience. Nowhere is this more true than the federal government. A point hammered home by President Obama at the 2013 White House Correspondents Dinner during a good-natured joke…that cut like a knife for journalists in the audience worried that the new paradigm means gaining access is harder than ever:

“[I’ve] found a new favorite source for political news -- these guys are great,” said Obama. “I think everybody here should check it out, they tell it like it is. It’s called whitehouse.gov. I cannot get enough of it.”

As the filter between government and the public continues to permeate, government organizations are taking advantage. Leading the way for how social media empowers citizen communications is Veronica McGregor, Manager of the News and Social Media Office at NASA’s Jet Propulsion Laboratory as well as the voice behind two of the government’s most popular Twitter accounts: @MarsCuriosity and @AsteroidWatch . The Mars Curiosity account has 1.4 million followers and Asteroid Watch has over 1 million. While both of these accounts were put on hiatus during the government shutdown, so strong was their following that a community of dedicated users posted more than 8,000 tweets, using the hashtag #ThingsNasaMightTweet , to pick up the slack while McGregor and her team were legally barred from updating the accounts.

“This to me validates all of the work that we have done in the last several years in social media,” said McGregor on the Excllence in Government Podcast last month. “We first went online and invited [people] to follow us, but not just follow us, to have a conversation with us.”

At the heart of that conversation is an effort by McGregor and her team to give voice to NASA’s projects and speak directly to the public’s intense interest in NASA missions.

“We try to make it a lot of fun and interesting enough that people are going to click on our links,” said McGregor. “There's always something there that we're asking them to look at or read more about.”

Getting citizens to engage with government through social media requires two things.

First, personality (of which @MarsCuriosity has plenty):

“We call it ‘bravada,’” said McGregor of the personality her team gave Curiosity via its Twitter account. “She's a big bad rover and she knows it—she has a laser on her head.”

On the other hand, Mars Phoenix, the Mars lander that preceded Curiosity in 2008 , had an entirely different voice—complete with a healthy dose of gallows humor.

“Phoenix had this really happy go lucky, eternal optimist point of view of being on Mars because it was going to…freeze to death,” said McGregor. On the other hand “Curiosity is the biggest rover that we have ever sent to another planet. If you compare the size with previous rovers she towers over them, so it was pretty easy to come up with that personality.”

“What people appreciated the most was that we didn't just push out information to them,” said McGregor. “Anytime we post a tweet we know that we're going to have somebody sit and watch that account and respond to the questions that come in. People love being able to get a response from NASA very quickly…We learned a lot about what people didn't understand about our missions. We learned what we had taken for granted.”

By using social media to be accessible and listen, NASA has extended its social media prowess beyond Twitter. By making NASA experts available to field crowdsourced questions in Reddit AMA's , the space agency has found a medium to engage thousands (or a few hundred in certain subreddits) simultaneously in deep, thoughtful conversations about their work and the science underlying it.

“We find [Reddit] to be an incredibly effective way for people to get some direct information from NASA,” said McGregor. “We know that our stories on Reddit are very popular.”

Some of the top NASA AMA’s have included the scientists and engineers on NASA’s Voyager mission , the Mars Curiosity mission team , a team of Asteroid experts and Mason Peck, NASA’s Chief Technologist .

“It's amazing to me to think that prior to 2008 we didn't have this method of communicating directly with the public,” McGregor said of social media. “Our office only used to be able to do the news releases—but we didn't get that direct feedback. As soon as we opened up [to social media] we got feedback, we discovered that people loved to hear about our missions and that they wanted more information—not less.”

To learn more about how technology is changing the way government interacts with citizens, register for free to attend NextGov Prime Nov. 20 – 21 in Washington, DC.

NEXT STORY: Analysis: Confidence in Federal Workers Up Sharply After Shutdown