Management
Saturn's Hurricane Is a Super Storm on Steroids, Even for the Solar System

NASA is showing off a close up of Saturn's mega storm.

By Alexander Abad-Santos
The Wire

Now that we've got our first good look at it, let's put the mega storm on top of the sixth rock from the sun into some perspective: According to NASA, the eye of Saturn's massive hurricane is about 1,250 miles wide — approximately the distance between Los Angeles and Oklahoma City. That's about "20 times larger than the average hurricane eye on Earth," and the wind speed from the outer edge of this storm, making planet-fall around Saturn's north pole, is being clocked at 330 mph. The Saffir-Simpson Hurricane Wind Scale, which gives us the categorical 1-5 labels we use to measure hurricanes on this planet, clocks a Category 5 storm as those with winds higher than 157 mph — and says that kind of storm can leave towns and cities in ruin, uninhabitable for weeks or months, as the 174 mph Hurricane Katrina winds demonstrated. For Saturn's storm, which has been brewing since before Katrina, try almost doubling that.

The first photos to emerge in close-up and in decent enough light to make your jaw drop were actually shot in November by NASA's Cassini space craft. But this thing has actually been tracked for years, and it's actually big in the context of the larger solar system, too: The "disturbance generated the largest stratospheric thermal anomalies ever detected on Saturn," and that kind of meteorological space force was even bigger than Jupiter's famous "red spot" — or at least it was larger than that massive planetary stormat one point, reports National Geographic . Scientists aren't sure exactly when the Saturn hurricane started, though they believe it's been spinning at Saturn's north pole some time, as the Cassini orbiter first spotted the makings of a vortex in 2004 — we just had to wait a few years for a better view. Unlike Earth's storms, Saturn's hurricane didn't drift; it's been spinning in place on the planet's north pole this whole time.

"The hurricane swirls inside a large, mysterious, six-sided weather pattern known as the hexagon," NASA reports . And while it's completely stunning and hypnotizing to Earth-bound humans, the storm is actually providing valuable information to scientists at NASA, who are hoping to see if it tells them anything about storms here on hearth. "Although there is no body of water close to these clouds high in Saturn's atmosphere, learning how these Saturnian storms use water vapor could tell scientists more about how terrestrial hurricanes are generated and sustained," reads the NASA release.

Here's one more shot of the storm: 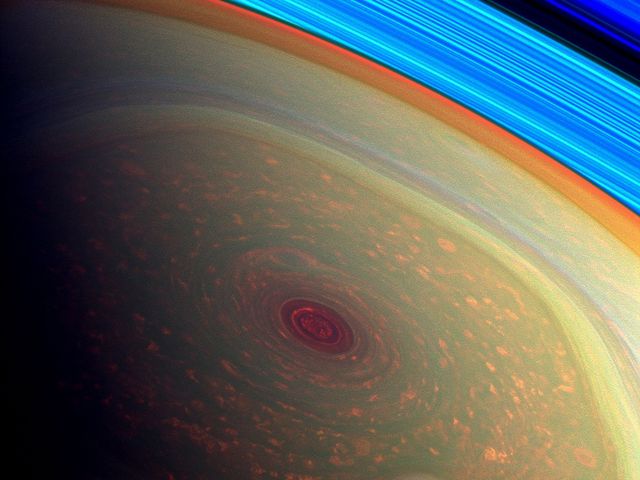 Read more at The Atlantic Wire.

NEXT STORY: Did FAA Play Politics in Applying Sequester Law?