Management
Federal Leadership is on the Decline

New research sheds light on which agencies have the best, and worst, leadership.

Federal employee satisfaction with their leadership is low and slipping, according to new analysis from the Partnership for Public Service and Deloitte. Federal employees have given effective leadership low marks in the Best Places to Work in the Federal Government ® rankings over the past several years, but from 2011 to 2012 the government-wide score slipped 2.1 points to 52.8 on a scale of 100.

The low marks on leadership are an alarming finding, since leadership is the most important driver of overall federal employee satisfaction and commitment, and research has shown that the more engaged employees are, the better an organization performs. 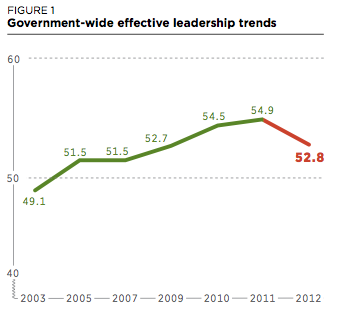 The score reflected lower marks on four elements that make up the effective leadership category in the Best Places to Work survey, including empowerment, fairness, supervisors and fairness, with the largest drop and lowest scores given for empowerment and senior leaders.

Only 4 out of 10 federal employees felt empowered with respect to their work process and slightly less than half said they were satisfied with their involvement in decisions that affect their jobs.

Just half of federal employees said they have a high level of respect for their organization’s senior leaders, defined as “the heads of agencies, departments and their senior management teams.” Only four in 10 federal employees said their leaders generate high levels of motivation and commitment in the workforce. And fewer than half said they were satisfied with the level of information they receive from management on what’s going on in their agencies.

Opinions of fairness slipped 1.3 points since 2011. Less than 6 out of 10 employees reported that they believe they can disclose a suspected violation of any law, rule or regulation without fear of reprisal, while fewer than 50 percent said that arbitrary action, personal favoritism and coercion for partisan political purposes are not tolerated. 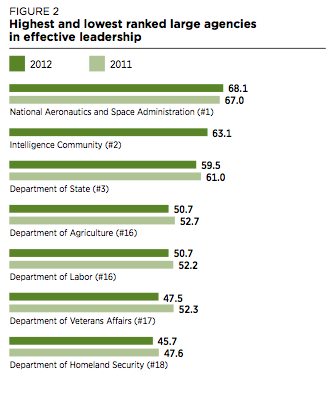 The highest leadership marks from federal employees came went to first line supervisors, with a score of 62.3 out of 100.  Roughly six out of 10 federal employees thought their supervisors were doing a good job, engaged in worthwhile discussions about their performance, gave them opportunities to demonstrate leadership skills and supported their development.

Despite the overall decline in leadership scores, a few agencies defied the trend and were able to improve their scores amidst a challenging federal climate. The National Aeronautics and Space Administration (NASA) and the Departments of Commerce both improved their score by 1.1 points. The Department of Transportation improved its score more than any large agency, by 2.3 points, while the Office of Management and Budget improved its score the most of among agencies of all sizes, with an increase of 12.1 points. Other agencies that successfully bucked the trend include the Departments of Interior, Energy, Education, and Health and Human Services.

For a full list of agency rankings by leadership, visit www.ourpublicservice.org .

Lara Shane is Vice President for Research and Communications at the nonprofit Partnership for Public Service. This is the fourth article in a series on the 2012 Best Places to Work in the Federal Government® rankings. For information on how to improve employee satisfaction and commitment at your agency and to request a senior leadership briefing on your agency’s Best Places to Work results contact Mark Doboga at mdoboga@ourpublicservice.org .