Management
Here's What Happened the Last Time the U.S. Defaulted on Its Debt

The debt ceiling and glitchy word-processors do not mix well.

By Matthew O'Brien
The Atlantic
Once upon a time, Congress didn't want to raise the debt ceiling, and sent the country into default. It was bad, and we shouldn't do it again. The end.
Oh, you wanted to hear the rest of the story? Okay, here it is. Back in 1979, Congress waited, and waited, and waited to lift the debt ceiling, because Congress never likes taking responsibility for the tax and spending decisions it's already made. Now, Congress usually does the right thing after it's exhausted every other possibility, at least when it comes to paying our bills, and this debt limit increase was no exception. Congress did raise it right before defaulting on our obligations would have been unavoidable ... but that didn't let us avoid defaulting on our debt. At least not $120 million or so of it. That's because the logistically and technologically-challenged Treasury couldn't get the checks out in time on such short notice. As Donald Marron of the Tax Policy Center explains, the Treasury got swamped with an inordinately high demand for Treasury bills, which it couldn't meet due to a word-processing error. So we defaulted on some of them.
The government eventually paid back everyone what it owed with interest, but that didn't erase this accidental default from the market's memory. Short-term interest rates shot up 0.6 percentage points after the Treasury missed its payments, as you can see in the chart below from Terry Zivney and Richard Marcus, and remained higher than they otherwise would have been for a few months at least. It wasn't the end of the world, but it wasn't exactly something we want to repeat either. 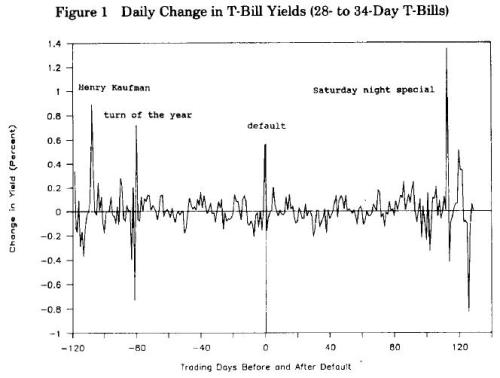 But it would be much, much closer to Armageddon if we did this today. Blame the shadow banking. The past few decades, there's been a shift in the financial system towards things that, economically-speaking, look like a bank, act like a bank, but technically aren't banks. Institutions like hedge funds, structured investment vehicles, and money-market funds all borrow short and lend long, just like a bank, but do so outside the web of regulations that control, and safeguard, regular, old banks. In other words, they trade FDIC insurance and access to the Fed window for complete financial freedom.
Read more at The Atlantic.
Share This:

NEXT STORY: Why Obama’s White House Is Not Like An Episode of 'The West Wing'