Management
How to Run a Staff Meeting

Scott Eblin
Executive Coach
Here are some examples of what I mean by that. See if you agree with me that it's a pretty good way to run a staff meeting.

There's an interesting video on the New York Times web site that offers a peek inside the daily staff meeting of the team responsible for cleaning up the Gulf oil spill. It's about three minutes long and is worth a look if you want to see how an efficient staff meeting is run. 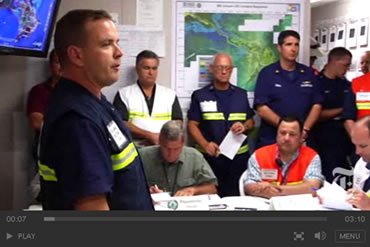 I've watched it a few times and have concluded that while it probably wasn't intentional the meeting format could have been based on the old journalism school formula for writing a news story - Who, What, When, Where, Why, How.

Who: The meeting includes the key leaders from the different groups working on the cleanup. Because they're coming from different organizations, participants use clearly marked tent cards and badges that denote their home organization and the role that they're playing.

When: Because it's a rapidly changing situation, the team meets daily first thing in the morning. The expectations around the routine and starting on time seem clear.

Where: Even in this brief clip, it's clear that the team has put a system in place to clearly identify which locations in the Gulf need special attention on any given day.

Why: The reason why these meetings are held is to coordinate the efforts and share vital information between a variety of local, state and federal agencies as well as BP and the private contractors working on the spill. A clear Why keeps people engaged.

How: The meeting leader clearly states the ground rules for how the meeting will operate - cell phones off, radios down, stick to the agenda and no side conversations. There's an emphasis on using the processes and documentation that will keep everyone on the same page.

Those are some of the things I saw that I think are worth emulating when conducting a staff meeting. What else did you see in the video? What do you think makes for a good staff meeting? What should be avoided at all costs?

NEXT STORY: Drilling Down