sponsor content
Top 5 Telework Challenges that Government Agencies Face
Skip to Content
Get the latest on need-to-know topics for federal employees delivered to your inbox.
View Privacy Policy
Attitudes on Customer Service Quality Differ between Federal Managers and the Public

In 2014, two major events – the fraught rollout of Healthcare.gov and revelations of secret waiting lists at a Veterans Affairs-run hospital in Phoenix – arguably damaged the reputation of federal customer service. Further, they cast doubts on the Obama Administration’s goal of achieving a level of service quality on par with the “best in business,” as outlined in a 2011 Executive Order.

The question remains: were these simply isolated incidents caused by a few bad apples? Or do they reflect underlying deficiencies that could plague federal agencies far into the future? To shed some light on this issue, GBC asked federal managers themselves whether they agree or disagree with the following statement:

My department/agency provides a customer service experience that is at least comparable in quality to what one would expect from the private sector.

Of the 254 respondents representing over two dozen civilian agencies, 67 percent agree or strongly agree that their agency provides a customer service experience at least comparable to the private sector. 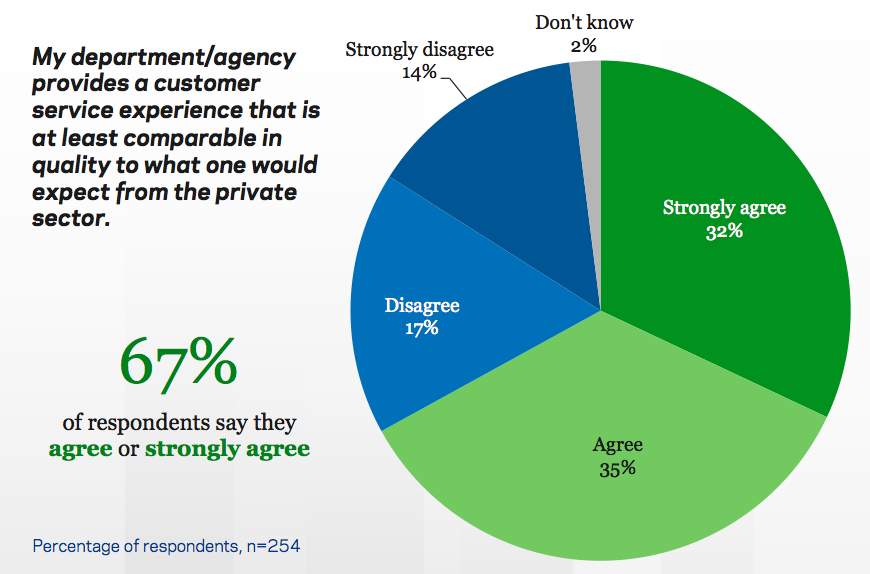 In just the last few months, the Office of Management and Budget elevated customer services to the status of Cross-Agency Priority Goal in an effort to streamline services, develop performance standards for high-impact services, and utilize technology to adapt services for the digital age. The responses seem to indicate that despite recent setbacks, the majority of federal managers are confident in their agency's progress.

But in contrast to this cautious optimism, the general public remain largely skeptical. The November 2014 American Customer Satisfaction Index, an annual cross-industry consumer survey, found that customer satisfaction with public services reached its lowest point since 2007. Perhaps more revealing is the fact that of the 40 industries studied, federal customer service ranked second to last in quality, well behind healthcare, finance, and information technology.

So what explains this disparity? Are federal managers’ attitudes overly optimistic? To what extent can other factors, like media coverage or political affiliation, influence one's opinion of service quality above and beyond one's own experiences interacting with federal agencies? What is for certain is that agencies will need to make even more progress before they're perceived as comparable to the private sector – at least in the eyes of those they serve.