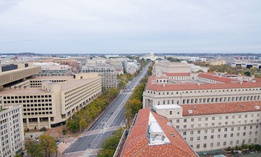 Workforce
Podcast: A Checklist Before Feds Come Back to their Offices

Workforce
Podcast: A Checklist Before Feds Come Back to their Offices

By
The Hotline
While saying he hopes "the Internet will spark more interest and participation in elections in 2000, the way television did in 1960," Case added the "challenge" was to shape the Internet's role in politics and "not to allow it 'simply to happen' as it did with television": "It will be important in the early years to identify models of what will work and what will not. And it will be important to establish ground rules for how to position the Internet in the political process."

America Online founder and chairman Steve Case has told the Freedom Forum Conference on Journalism and the Internet that 2000 will be "the turning point" for Internet's impact on politics and that 1998 will be "a year of experimentation."

Communications Daily reports that Case announced that AOL will provide an "interactive forum for political candidates" this fall. Said Case of the Internet's affect on politics: "It's big enough to be relevant but still small enough to be shaped."

Case cited four areas where AOL will concentrate this year:

He called TV "a big contributor to the problem" of the federal government seeming distant and the average citizen seeming "irrelevant to the whole process." In contrast to online, he called TV expensive, "its formats are inflexible and, with few exceptions, its technology does not allow for the electorate to speak back and to participate in the politcial conversation."