A series of internal and external factors has driven the Combined Federal Campaign to the brink of irrelevance.

The government on Monday kicked off its annual drive for charitable donations from the federal workforce, looking to improve its performance after a decade of declining results.

The Combined Federal Campaign, operated by the Office of Personnel Management, raised just $93 million last year, down 8% from the previous year and just one-third of the funds raised a decade earlier. Contributions have dropped each year since 2009, despite reforms implemented in 2017 to modernize the program.

In fact, CFC experienced its most significant drop off in 2017, the year those changes went into effect. Pledges shrunk by 40% compared to 2016. Ten years ago, one-in-four federal employees donated to the campaign. By 2018, that fell to just one in 25. 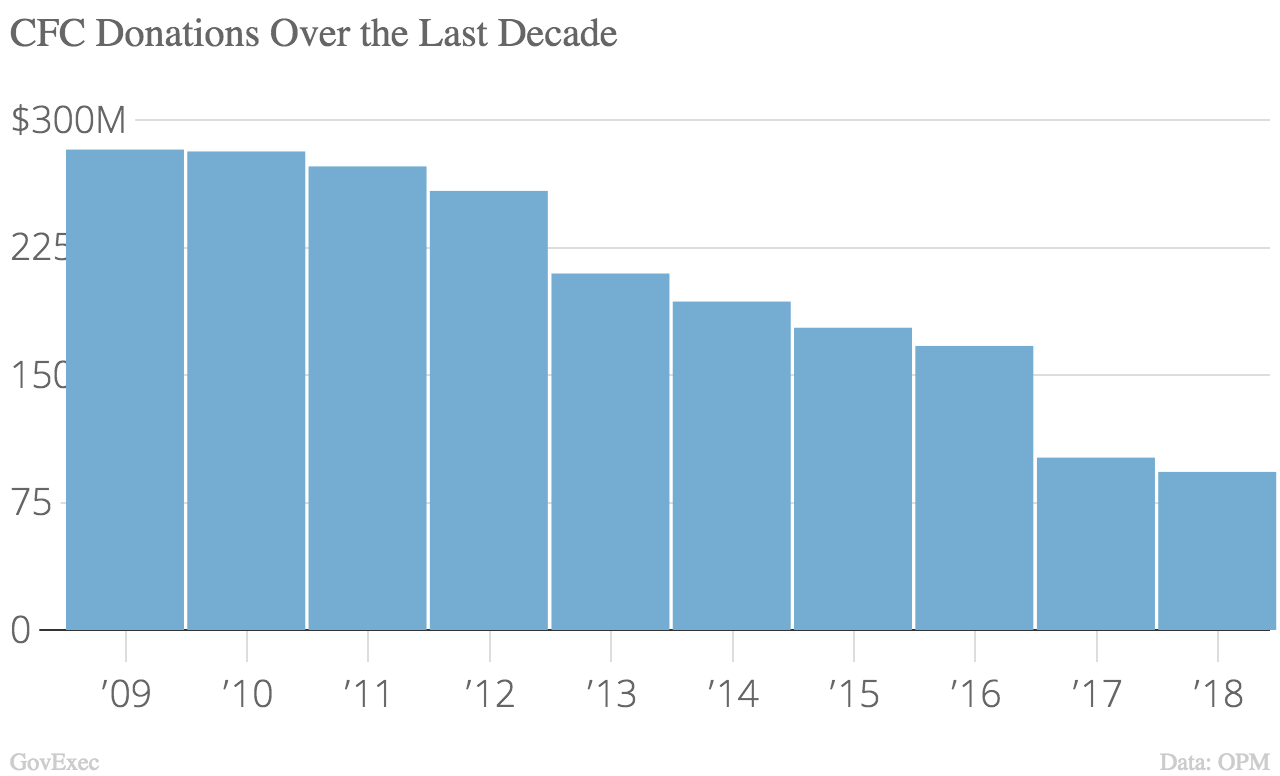 “The picture looking backward has been profoundly disappointing,” said Marshall Strauss, CEO of Workplace Giving Alliance, a group that helps charities navigate the CFC. “OPM has made a series of decisions that have not helped, that have managed the campaign in a way that has driven donors away and has driven charities away.”

Officials involved with the giving drive said they expected a slight uptick in performance last year, as many of the kinks involved in the 2017 rollout had been ironed out. Early returns looked positive, said Jim Starr, CEO of America’s Charities, but then the record-setting 35-day shutdown hit in the middle of the campaign.

“All of the momentum that was experienced up to that point was lost,” Starr said. CFC experienced a similar drop in the 2013 campaign when the government shut down for 16 days. It never recovered from that decrease.

A number of factors, both circumstantial and systemic, have contributed to the campaign’s decline: An increase in the avenues through which individuals can donate to charities, missteps by OPM, and more uncertainty for federal workers have all led to a CFC struggling to stay relevant.

In 2012, OPM commissioned a panel to recommend changes to the CFC’s operations to coincide with the program’s 50th anniversary that year. After significant delay and pushback from stakeholders, OPM finally implemented the suggestions in 2017. The changes included popular provisions such as enabling retirees to have donations deducted from their annuities and improving online giving. They also contained more controversial reforms, such as eliminating cash-based donations—essentially ending popular initiatives like office-led bake sales—and phasing out location coordinating committees in favor of larger regional structures.

OPM also began collecting fees up front from participating charities, in addition to a percentage of all donations, to better cover the costs of administering the campaign. As a result, some small charities failed to cover their own costs related to the CFC, Starr said, and fewer organizations are willing to participate.

Federal employees themselves have dealt with difficult circumstances that may have limited their disposable incomes. The government shut down in the middle of the 2018 CFC drive, forcing about 800,000 federal workers to go 35 days without pay before eventually receiving retroactive compensation. While federal workers have not endured a pay freeze since 2013, they've lived with historically small raises and threats of no increases that have been resolved only after 11th hour congressional interventions.

OPM also experienced hiccups with its rollout of a new website to solicit donations, where the search functionality often failed to display the charities donors were seeking. Starr said OPM has addressed most of those concerns.

The Workplace Giving Alliance’s Strauss said there was a “disastrous combination of failures” in 2017, but OPM had improved processes surrounding marketing, screening of charities and solicitations. Overall, however, Strauss said OPM is losing out by failing to engage employees at a personal and peer-to-peer level.

“OPM has moved in the direction of the impersonal,” he said, calling the focus to simply direct employees to a website to give “very isolating.” He added: “The government doesn’t really understand the opportunity to engage employees, to excite employees and to invite them to engage each other and excite each other.”

Still, Starr said he sees reasons for optimism, hoping the campaign could grow by as much as 5% this year. The days of $300 million in annual giving are likely a thing of the past, he said, but he does not expect the fundraising to continue to slide indefinitely.

“That a 35-day shutdown only caused a 10% decrease is a sign that it’s either at its floor or close to it,” Starr said. “Under normal circumstances I would be more optimistic, and I would be inclined to project improved results,” he added. “But that is tempered by the recent past.”

Charities are also concerned about OPM’s inability to slash administrative fees, with some fearing the cost to operate the campaign could soon make the diminishing returns untenable.

“There is a dynamic at work here that is driving the campaign into a very dangerous direction,” Strauss said.

Additionally, the federal government now faces a bevy of competition for employees’ donation dollars, including social media and text message-based campaigns that have minimized the impact of workplace-based giving drives. Despite all the challenges, Strauss said he still sees a path forward for the CFC if it can properly harness employees’ passion.

OPM declined to answer questions for this story in time for publication, but provided a statement from acting Director Margaret Weichert.

“Every year the federal workforce, military, and retirees show off their tremendous hearts for the causes that they believe in,” Weichert said. “I know that this year will be no different.”