Pay & Benefits
Which Ex-President Cost the Government the Most in Fiscal 2015?

George W. Bush received $1.1 million in pension money and other perks under the Former Presidents Act.

Former President George W. Bush cost the government $1.098 million in pension money and other perks in fiscal 2015, racking up the highest tab of the four living ex-commanders-in-chief, according to a new report.

The 43rd president received a pension (and related benefits) worth $214,000 in fiscal 2015, the General Services Administration reported, according to a March analysis from the Congressional Research Service. But the largest part of Bush’s allowance for that year -- $434,000 – went to office space, the data showed.

The Former Presidents Act authorizes GSA to provide ex-presidents with a lifetime federal pension, and other benefits including travel funds, staff support, office space, and mailing privileges to “maintain the dignity” of the office and ensure they are able to carry out the informal public duties required of the elite club. Former presidents are eligible for benefits under FPA unless they hold “an appointive or elective office or position in or under the federal government or the government of the District of Columbia to which is attached a rate of pay other than a nominal rate,” the law states.

Former President Bill Clinton was not far behind George W. Bush, with a total GSA allowance of $924,000 in fiscal 2015, which included an annual federal pension and related benefits of $218,000 and an office space price tag of $429,000. The pensions of former presidents are equal to Executive Level I pay, which in 2015 was $203,700, and is $205,700 in 2016. GSA told CRS that it was “uncertain” why the pension benefits for Bush and Clinton exceeded the statutory caps, according to the report. CRS pointed out that the pension category includes “related benefits,” and that the figure could include health care costs for Bush and Clinton.

Former President Jimmy Carter received the smallest pension and benefits allowance of the group in fiscal 2015 -- $430,000. The 41st president, George H. W. Bush cost the government $794,000 in pension and other benefits in fiscal 2015.

Office space was biggest expense under the FPA in fiscal 2015 for all the ex-presidents except Carter, CRS found. Carter received a $205,000 pension that year, and $112,000 for office space.

The House in January passed a bill that limits the annual pensions of ex-presidents to $200,000, with an additional $200,000 to be used as the former president wants, but would remove the allowances for other benefits such as travel and staff. The legislation also would reduce by $1 a former president’s annuity for every dollar that individual earned over $400,000 in a fiscal year. A similar bill is pending in the Senate.

“Some critics of the Former Presidents Act say the statute subsidizes presidents who are not struggling financially,” said the CRS report. “Others argue that although a former president is not in a formal public position, he remains a public figure and should be provided a pension and benefits that permit him to perform duties that emerge as a result of his public status.”

There seems to be an ebb and flow when it comes to funding for former presidents’ benefits, according to the report. The value of the benefits, when adjusted for inflation, generally declined between fiscal years 1998 and 2015. But “the nominal appropriation levels for former presidents’ benefits, however, increased through fiscal 2011 and then declined from fiscal 2011 through fiscal 2015,” CRS found. George H.W. Bush, however, is an exception to the trend related to the value of benefits. “Between fiscal 2000 and fiscal 2015, George H.W. Bush’s adjusted pension and benefits increased from $790,000 in fiscal 1999 to $794,000 in fiscal 2015,” the report said. 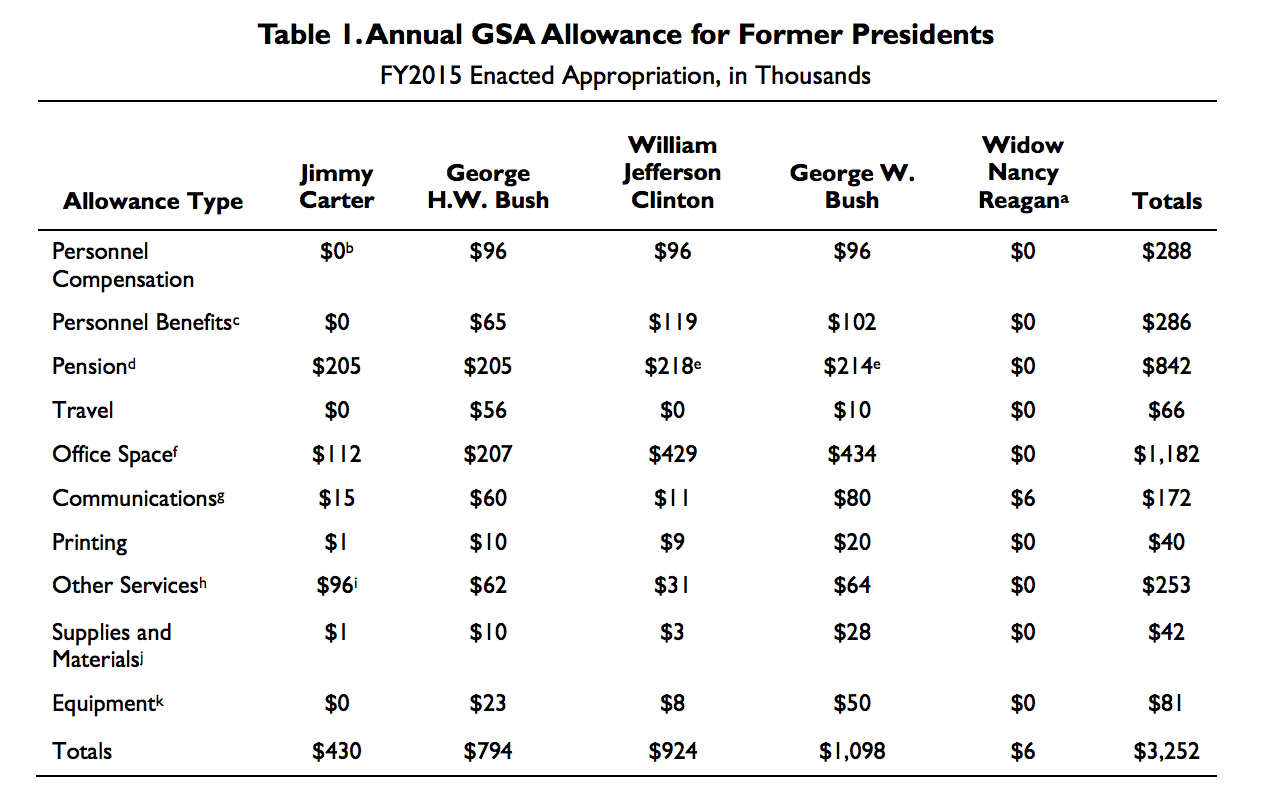