Groups say recommended increase for federal employees does not keep up with inflation, private sector salaries.

Federal employee groups criticized President Obama’s proposal for a 1 percent pay raise in 2015 for civilian employees and most military personnel, calling the suggestion “inadequate” and “pitiful.”

A White House official on Monday announced Obama was including the recommended pay raise in his soon-to-be-released fiscal 2015 budget. If Congress accepts it, the increase would mark the second consecutive year of a 1 percent raise after a three-year pay freeze for federal civilian workers.

“I strongly believe that federal employees deserve more and this amount is inadequate,” said Colleen M. Kelley, president of the National Treasury Employees Union, adding she would accept nothing short of a 3.3 percent raise. “When compared with wage growth in the private sector, federal workers will fall further behind, making it more difficult for the government to attract and retain qualified personnel.”

Both Kelley and J. David Cox Sr., president of the American Federation of Government Employees, said federal employees have already contributed $120 billion to deficit reduction through various cuts to their compensation.

“Federal employees have endured years of pay freezes and cuts in retirement benefits,” Cox said, calling for a 4 percent raise in 2015.  “Federal employees deserve a meaningful pay raise, not a token increase that will be more than eaten up by rising living costs, including higher retirement and healthcare costs.”

He added since 2010, the cost of living has gone up 9 percent while feds’ wages have increased just 3 percent.

“A 1 percent pay raise for federal employees who have seen more austerity than anyone else is pitiful,” Cox said.

“Although we are thankful the three-year pay freeze has ended, now that our country is back on a stronger economic footing, it is time to start closing the growing gap between public- and private-sector wages,” Beaudoin said. “The effects of the past three years of financial hardship have left their mark on federal workers, to the extent that half the federal workforce is exploring other career options.”

Not all reviews were negative; Sen. Barbara Mikulski, D-Md., chairwoman of the Senate Appropriations Committee, praised Obama for proposing the raise.

Government Executive readers were not impressed, however.

“To hell with this pay raise,” said GovExec commenter Eddie Stringer. “I would prefer a cost of living increase; at least I may be able to pay for decent housing.”

“1 percent?” asked another commenter. “Are you kidding? That stinks, that really stinks. This will make a total of a measly 2 percent general civilian pay increase over five years.”

Congress must approve any raise for federal employees, though if history is any indicator, Obama’s proposal is likely to become law. If Congress does not include language in legislation supporting or prohibiting a federal pay increase, then the president’s recommendation becomes law. Congress has accepted Obama’s recommended boost in four of his five budget proposals, with the proposed 0.5 percent increase for fiscal 2013 the lone instance of congressional rejection.

Pay raises, or lack thereof, are unprecedentedly low under Obama. Here is a chart of every pay that raise federal employees have received since 1970 (click to enlarge): 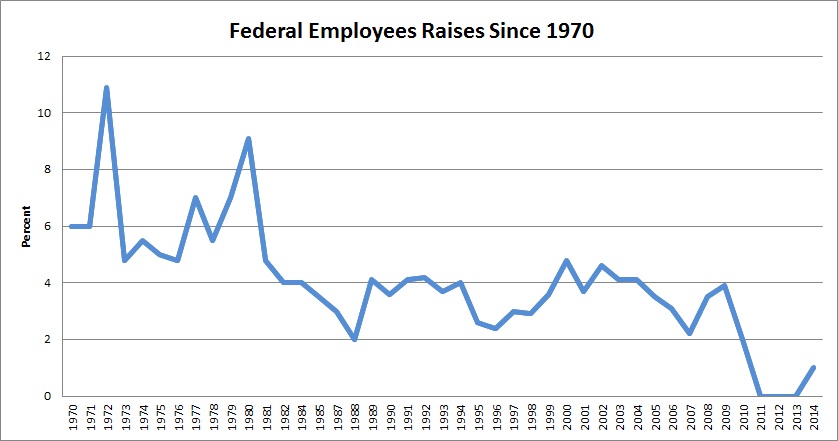 NEXT STORY: Obama to Propose 1 Percent Raise for Feds, Troops in FY15 Budget